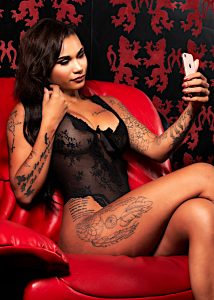 Palomino Club, one of the very best strip clubs in Las Vegas, is reopening Monday night.

For the first week or two, the club will be opening at 8 pm and closing at their normal time of 5 am Sundays through Thursdays and 7 am Friday and Saturday nights.  They plan to get back to their normal opening time of 6 pm within a short time.

Limo service to the club will be available Thursday through Saturday nights.

You know I will be there.  More info to come.

One Guy with an Animal Horn

I’ve already written about how the climax of the Democrats’ Election Chaos strategy was supposed to be a 50-day Siege on the White House. The siege was supposed to start today.

Then yesterday Attorney General Barr let it leak out that he was encouraging federal prosecutors to charge violent Antifa-BLM rioters with sedition.  Suddenly, the people organizing the Siege on the White House started calling it “50 Days of Non-Violent Jazz Improv”.

One of the Jazz Improv posters seemed to try to maintain the hope of violence.  Its main image was hands holding roses in front of a fuzzy backdrop of rioters and a burning White House.

But alas, neither rioters nor jazz improvisers have actually turned up for the siege.  As of 6:30 pm in DC, the guy blowing on the animal horn in the video below is the lone protester.

DC: The revolution is having a hard time getting off the ground here in DC in front of the White House pic.twitter.com/cM0A6NNYRP

Nashville Democrats Hide Data to Shut Down Bars and Restaurants 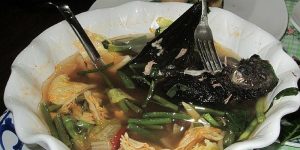 Bat Plague cases coming from bars and restaurants were so low in Nashville that the Democrat mayor’s office conspired with city health department officials to hide it from the public.

In fact, despite knowing these low numbers, Nashville Mayor John Cooper closed bars and restaurants in the city, claiming falsely that large numbers of cases had been traced to them.

I’ve been telling you for six months that Chop Fluey has been a Democrat hoax meant to destroy the economy for the election, and here are yet more data that prove it.

I’m reporting on this development because it’s been exactly the same in Las Vegas.  There have never been any data showing that bars, restaurants, nightclubs, shows or Vegas strip clubs have been a serious source of China Cooties transmission, and yet the Democrat governor of Nevada, Steve Sisolak, to this day has ordered bars, nightclubs, shows and Vegas strip clubs completely shut down, with restaurants at 50% capacity, which is economically unsustainable.

This in a state whose only industry is tourism.  Vegas tourism numbers and spending collapsed after a promising June reopening when word got out there was nothing to do here.  Now Wall Street is predicting that over 40% of this tourism revenue is gone forever.

In Nashville, a series of email exchanges between Benjamin Eagles, a senior adviser to the mayor, and Leslie Waller of the health department discuss the high number of cases coming from nursing homes and construction sites.  There were over a thousand cases from each of these categories.

Meanwhile, only 22 cases had been traced to bars and restaurants, and that’s “cases”, not hospitalizations or deaths.  Oxford and Stanford studies have shown the death rate of WuFlu is 1/10th to 1/3rd the death rate of the annual flu.

A month later reporter Nate Rau of WZTV asked health department official Brian Todd, “The figure you gave of ‘more than 80’ does lead to a natural question: If there have been over 20,000 positive cases of COVID-19 in Davidson and only 80 or so are traced to restaurants and bars, doesn’t that mean restaurants and bars aren’t a very big problem?”

Instead of just responding with the truth that restaurant and bar contacts had not been a problem, Todd asked five different health officials how he should respond.

One health official wrote back to him:

“My two cents. We have certainly refused to give counts per bar because those numbers are low per site.“

In response to the leak of the emails, Nashville City Council Member Steve Glover said,

“They are fabricating information…  [We] put hundreds, literally thousands, of people out of work that are now worried about losing their homes, their apartments…and we did it on bogus data. That should be illegal.”

I love the sheer gall of Democrats who show up at this website and complain because they’re butthurt over me calling out the evil of the politicians and policies they supported.  Nothing’s more important than your feelings, amirite, Democrats?

Now it comes out that Tennessee health officials overcounted active Covid-19 infections by 13,800 cases, exaggerating the size of the outbreak by 40% as of the start of September, long after health officials realized these weren’t active infections.  Then they tried to correct the numbers without telling anyone.

And they are still exaggerating the numbers, as the CDC as corrected the actual U.S. death total from Covid-19 to 9,210 cases.  The rest of “Covid deaths” were actually from multiple serious conditions like heart disease, stroke and cancer, plus old age.

The Tennessee governor is Bill Lee, a Republican.

Siege on the White House Turned into a Jazz Fest 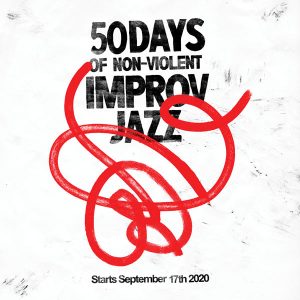 On August 3, Black Spot Collective, a Canadian Marxist group associated with the Soros color revolution in Serbia, started organizing a 50-day Siege on the White House to start this Thursday, September 17.  The plans were all laid out on their website, Adbusters.org, which openly called for physically removing President Trump from the White House.

I’m not even going to start on the effrontery of Canadians planning a coup in the United States.  There is obviously something seriously wrong mentally with a country that could reelect Trudeau.  In any case, I wrote about their plans for an assault on the White House here.

The video below was taken during the Democrats’ first attempt at an assault on the White House at the end of May.  The People’s Liberation Army of China was directly involved in it and had multiple personnel on the ground there.  China’s been funding BLM from the start and using it to launder money to the Democrats.

The underlying goal of the Siege on the White House was to provoke an overreaction from Trump.  Democrats wanted a Kent State massacre to turn public opinion in favor of a coup.

They failed.  And now, suddenly, the Adbusters website is backing off talk of a siege. Instead, they are calling for a 50-day jazz festival.  Here is their most recent “Tactical Briefing”:

#WhiteHouseSiege has an ominous ring to it. But it could turn out to be the most beautiful, festive, and effective uprising that America has seen since the Revolution.

Their new poster calls for “50 days of non-violent improvisational jazz.”  We’re apparently all supposed to grab a clarinet and go to Lafayette Park and “improvise”. 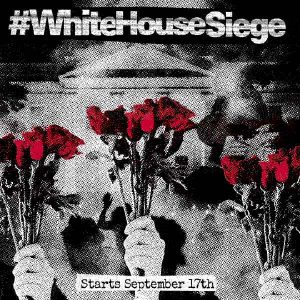 Another poster shows rioters in front of a burning White House, with hands holding flowers in front, another obvious attempt to evoke Summer of Love sentiment.

They claim that attention by the “Far-Right”, including a One America News broadcast focused on the White House Siege, led to the decision to restate their intentions.

It’s worth noting that every “tactical briefing” from the group has included the phrase “non-violence”, as has virtually every poster I’ve seen calling for rioting in Portland, Seattle, Chicago, NYC, Kenosha, etc.  For the left, rioting, looting, arson and assault are now considered “non-violence”.  Silence, being white, and private property are considered “violence”.

So Antifa-BLM may make another stab at setting up a CHAZ-style “occupied zone” in Lafayette Park, with the media using it to push peace and love propaganda collected during the day while riots reign at night.  Antifa-BLM rely on a huge crowd of normies to hide behind as they carry out their crimes.

But pretty much the entire Riot Kitchen group from Portland was rolled up in Kenosha.  Rose City Antifa’s favorite murderer, Michael Reinohle, died in a firefight with cops.  Other Antifa-BLM from Seattle, Portland and Chicago were just rolled up en masse in Lancaster and Pittsburgh.  In Lancaster, they’re being held on $1 million bail each.

So Antifa-BLM has to be lacking in thugs about now.  And after the attempted execution of two cops in L.A., I question whether Antifa-BLM can still turn normies out.