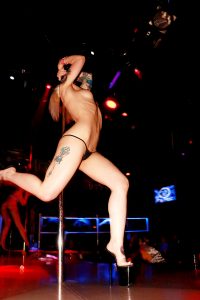 Last night I had the honor of being one of seven judges in the Miss Exotic Nevada Pole Championship at Palomino Club in North Las Vegas. I’ve been announcing this event for a few weeks now and mentioning that I expected to see Olympics level pole dancing. I was not disappointed. The winner will be announced tonight at the 2019 Miss Exotic Nevada competition.

Though I handed in my own ratings, I won’t even try to guess which of the eight contestants might be chosen as the winner. Someone is now compiling all the data to determine that.

Mercy, Frenchy, Reagan Reilly and LaDonna impressed me the most.  Mercy is obviously trained in ballet and performed the most slow and sensual pole dance I’ve ever seen. Frenchy, whose home club is Palomino, was stunning and absolutely perfect in her high-energy dance. Reagan Reilly, another Palomino dancer and TVO dancer of the month, was in top form in her acrobatic routine. And LaDonna, yet another Palomino Club star, had the crowd spellbound. (Pic of LaDonna on the pole at Palomino Club is from an earlier photo shoot.)

Another highlight was Juliette Electrique, who is primarily known as a sword swallower. She had the audience in stitches with a comedy routine, pantomiming a dancer getting ready to approach the pole, warming up, stretching, getting limber, but never quite making it. She’s a wonderful comic actress.

Tonight, I will once again be a judge, this time for the Miss Exotic Nevada feature dancing contest. This one should be wild. The contest starts at 8 pm and there will be 10 contestants with probably 100 props. Palomino Club is the only fully-nude Vegas strip club with a full bar, and it’s one of the top strip clubs in Las Vegas. 21+