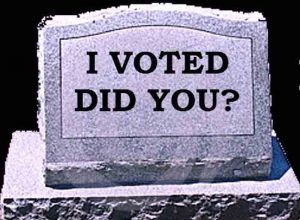 372,000 mail-in ballots have been rejected in Pennsylvania so far, with 90% of them rejected because the voter had voted more than once.

That was supposedly accidental.  Do you believe that?  Do you know any Americans who believe they are allowed to vote multiple times?  I don’t.

Let me tell you what almost certainly really happened.  Democrat operatives voted fraudulently in the names of people who don’t usually vote.  Then 372k of these people turned out to vote.  Now suddenly there are duplicates.  I’m guessing there will be lots and lots more “duplicates” and I’m guessing lots of other people who didn’t vote have ballots cast in their names.

I’m also guessing duplicate ballots were a big part of why GOP election observers were barred from some Philly election sites for a day or two last week.  The GOP dealt with that double quick.  Trump won PA in 2016 with a little over 44k votes, but there was a lot of Democrat vote fraud in the state, especially in Philly.

So Pennsylvania Democrats’ 2020 vote fraud plan has been foiled, and right after so many Philly election judges got caught for voting thousands of times each in past elections for money.

Pennsylvania pushed through a bunch of the new Election Chaos laws the DNC needed to guarantee a disputed election.  For example, they rushed through a provision that ballots had to be counted even without a signature or with a signature different from the one on file.  The GOP sued.

A source who is a former U.S. Attorney told me the Pennsylvania election lawsuit would likely hit SCOTUS before the election, with the new laws overturned.  That would overturn all the similar laws rushed through this year in Democrat-controlled states, including Nevada.

I’ve been posting in the comments all day about new developments in the Hunter Biden laptop case.  It’s going to require another post, but suffice it to say the money Joe got from foreign governments and criminals was at least $4.5 billion from China alone. Hunter’s partner Bevan Cooney has now flipped and has provided reporters with more emails, texts and files from Hunter’s firm.

Plus, a Chinese Communist Party whistleblower says three hard drives of CCP blackmail material on the Bidens, U.S. Congressmen, and Michael Bloomberg has been delivered to the DOJ.

Also, General Flynn’s attorney Sidney Powell tweeted today that Iran has been laundering payments to Obama through Netflix.  Remember that $60 million the Obamas got to “develop content”?  Yeah.

One of the key elements of the Democrats’ Election Chaos plan is preventing a winner from being determined for weeks or months after Election Day.

The entire point of the Bat Plague hoax has been forcing mail-in ballots with their high potential for postal scandals, ballot rejections and lawsuits, and vote fraud.  Democrats passed laws, often via an illegal process, or got court orders from Democrat judges, allowing up to two weeks to count ballots after Election Day.  In some states, the new laws or court orders require that no votes be counted until the end of the two week extension.

The GOP has filed lawsuits against all these new laws and court orders, and so far they have won all of these suits except two, which are headed for the new 6-3 SCOTUS.

Now a Michigan appeals court has struck down the ruling of a lower judge that extended the ballot receipt deadline for two weeks.  Democrats had to rely on a Democrat judge to order the extension, because the Republican-controlled Michigan legislature refused to pass a law extending the deadline.

With the new ruling, all Michigan ballots must be in by 8 pm of Election Day to be counted.

Democrats in Michigan, like those elsewhere, likely sent out instructions with mail-in ballots informing voters that they could mail their ballots on Election Day and still be counted.  That means Democrats, whose voters intend to vote by mail at three times the rate of Republicans, have shot themselves in the foot again.

“The Constitution is not suspended or transformed even in times of a pandemic, and judges do not somehow become authorized in a pandemic to rewrite statutes or to displace the decisions made by the policymaking branches of government,” Judge Mark Boonstra wrote in his opinion.