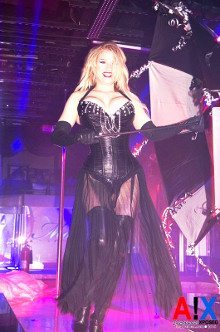 Reagan Reilly On Stage at the
Exotic Dancers Invitational

There are three divisions:  newcomer, showgirl and champions. I competed in the Newcomer division. We are judged on costume, hair, makeup, dancing, stage presence, and crowd entertainment.

There are different elements in a feature show or competition show that make it stand out from regular house dancing. Feature dancers tend to have elaborate costumes, stage props, aerial equipment, and more. Very often girls will use candles, lotion, confetti poppers, balloons, baby pools full of water and other glittery surprises — anything to spice it up and make it more entertaining. This is also where girls who are more talented at acrobatics and dance can showcase their skills. 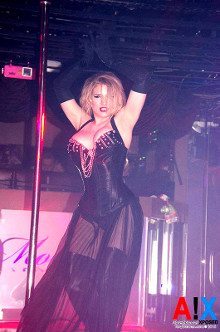 I started competing in 2013. My main focus in shows used to be doing lots of advanced pole tricks, but I still haven’t gotten back into pole full force since my breast implant surgery. So I’ve been focusing more on dance moves and execution.

I left Vegas on Wednesday, June 1st, for West Palm Beach. The competition was June 2-4. I was supposed to arrive the night before, around 9 pm. I got to the airport in Vegas Wednesday morning, ready for my 11:30 am flight. There ended up being four delays. I asked if I could switch flights. They put me on a 2:30 pm to Dallas to connect. That flight was also delayed. I got to Dallas and had to make my connecting flight in less than 20 minutes. I barely made that flight.

I arrived in West Palm Beach around midnight. My luggage didn’t make it on the plane. The competition, with my whole show, costumes and props, was in my luggage. I kept checking online hoping it would be on the 4:30 pm flight arriving the next day. That flight was also delayed, until 6:30. 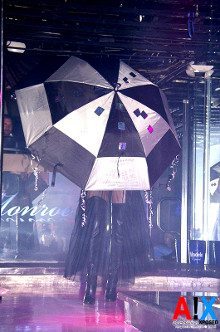 I knew it was cutting it close, so I had to have a backup plan. I told the other girls my crisis, and everyone offered to help. My theme was “Sweet Dreams.” The set up was going to be a dark rainy night, with a part where I’m a sexy dark mistress in a bedroom. (I had a blow up mattress and moon prop). I built a costume out of borrowed pieces from other girls and went to Walmart to buy some last minute stage props. (Check out the hilarious umbrella).

I went to the airport before the competition started, hoping maybe my luggage made the 6:30 pm flight, but it wasn’t there. So I had to compete without my stuff.

I had a CD with my music and a pair of fans with me.  I hadn’t packed them in my luggage for fear they would break. So thank God I still had my music.

There were five girls in my division. I went up fourth. I had an incredible time on stage! I really got into it, and did all my dance moves that I’d practiced as best as I could. I ended up winning second place in the competition! 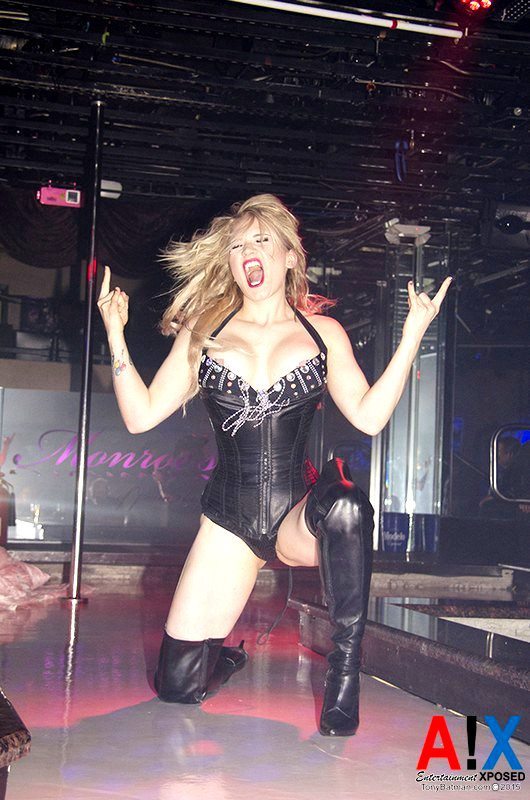 The whole event was amazing. Thank you to Monroe’s of West Palm Beach who hosted the competition in their club, to ED publications for putting together the event, and the other feature dancers who helped me and also continuously inspire and motivate me. And of course I want to thank my home club, Palomino (club review/ club website) in Las Vegas. Thanks to the great people at my home club, I’m able to compete and travel all over the US doing exotic dance. Check back for my schedule at Palomino. 🙂

You may be interested in Reagan’s diary on The Vegas Strip Club Hustle, and the pros and cons for a dancer of Getting a Boob Job.

Reagan is a regular contributor at TVO as well as a Dancer of the Month.

Check out Reagan’s just-released cover of The Logical Song here.