Las Vegas has had a troubled history with black strip clubs.  Over and over, we’ve seen black strip clubs open, put on a great party, and attract big crowds of happy locals and tourists on weekend nights, only to have some gangbanger shoot someone in the parking lot and ruin things for everybody.

In the past decade or so, Foxy’s and Strip Hop and Minx and The Library were all successful black Las Vegas strip clubs that got shut down because of shootings.

When Club Lacy’s, a terrific fully-nude urban club, got shut down when Palomino Club needed their space, the owner found it impossible to open anywhere else in town. And acquaintances who tried repeatedly to get a license to open a black strip club at Seamless got turned down again and again by the city.  The shootings made Vegas officials dig in their heels against liquor licenses for any new urban clubs.

That made Floyd Mayweather’s Girl Collection the only black strip club left in Las Vegas (not many people have the clout of the Champ).

Now it appears Seamless has decided to enter the urban arena, but quietly, staying under the radar of city officials.  It seems to be a black strip club that’s not quite admitting it’s even open.  It just has special events every weekend, “parties” promoted on websites and social media other than its own.

If you’re missing Club Lacy’s or Foxy’s or The Library, you may want to check it out.

In Vegas, Where There’s a Will to Party, People Find a Way 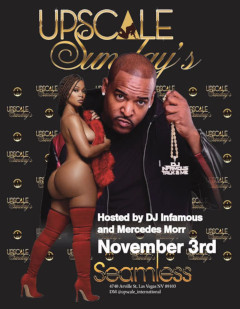 In July, the Seamless Gentlemen’s Club on Arville, across from the Orleans Casino, announced it would be reopening soon.  They even held a couple days of interviews for hosts, waitresses, bartenders, etc., followed by dancer auditions in August. Then . . . nothing.  They never reopened.

But if you surf around on Facebook, you can find announcements for a lot of regularly-occurring events at Seamless. On Charlo Basheer’s Vegas Takeover Facebook page, he advertises both “Upscale Sundays” and “Sinful Saturdays” events at Seamless. If you watch the video clips Charlo posts, these are obviously urban strip club events.  In one video, there’s a stripper on stage guaranteed to please big booty fans.

And on the Tempo After Hours and Over 21 Facebook pages, they’ve been advertising various events with photographs that sure look a lot like the scene I used see at The Library or Strip Hop.

The Seamless website still says the club is open Thursday to Sunday, from 8 pm till 8 am. But most of these events say doors open at 9 pm or 10 pm (or 11:55 pm for the Tempo After Hours parties).

Your best bet for more info are the Facebook pages mentioned above.  But keep it quiet.  People may enjoy this club for years without the city ever knowing.