John Katsilometes in today’s Las Vegas Sun finally solves the Crazy Horse Too mystery—how it is that the legendary topless club that had just finished a major renovation and nationwide recruiting campaign for dancer talent suddenly found itself locked up and dark with a CLOSED sign on the door two weeks ago. Here’s what happened:

Mike Galam, the California entrepreneur who bought the club last year and sank a shitload of money into getting it back up and running, suffered a personal tragedy in April when his girlfriend and mother of his three young children died. Prior to his girlfriend’s death, the club was already struggling with authorities, as there had been five prostitution busts at Crazy Horse Too in March.

A prostitution bust in a Vegas strip club often amounts to harassment of dancers where no prostitution has ever occurred.  After the dancers are hauled off and humiliated, the city shakes them down for fines and fees.  Las Vegas is basically a libertarian city with a minority of prudes who regularly maneuver themselves into positions of power.  Usually the prudes are the handmaids of the casinos, who aren’t happy unless everyone in town is blowing all of their money on slots.

In any case, with Galam distracted by personal issues, the club was playing too loose with its temporary liquor license and it was the city that shut it down.  The club was closed by the city business licensing department on August 22.

Now, the club’s new owners  have applied to the city for new licenses.  But since the new owners include Galam’s father and sister, as well as Craig Franze, the former club manager, the way ahead may not be easy. 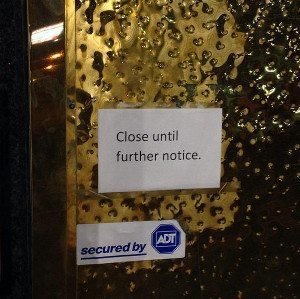 Crazy Horse Too door, posted by John Katsilometes on Instagram

One Response to “A Rocky Road Ahead for Crazy Horse Too”