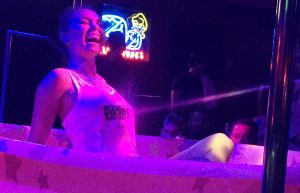 Little Darlings Contestant Getting Wetted Down

Vegas strip clubs use amateur contests to audition dancers.  You don’t have to want a job at the strip club to participate or win, but most contestants are girls who are hoping to land a job.

That’s what makes the contests fun to watch. The prize money and the possibility of landing a new career means the contestants really give it their all. In most cases, the only requirement for entrants is that they have valid photo ID showing their age.

There are three weekly amateur competitions in the Vegas strip clubs right now, and all have been running for years.

Little Darlings Vegas, Where the Amateurs Get Drenched

Little Darlings Vegas has its “Best Chest in the West” weekly amateur wet t-shirt contest every Wednesday night around midnight. (That’s tonight!) The contestants get one at a time into a child’s wading pool on stage and the emcee wets them down with a heavy duty water gun.  Most girls try to dance or pose while they’re getting wet, others just sit in the pool and laugh.

Though Little Darlings is a nude club, no nudity is required in this contest. Most contestants get topless and some (especially those who are hoping to land a job) get fully nude.

I did see a dancer win at Little Darlings one night even though she never removed her bra or panties. She really was the best looking girl on stage and also the best dancer. Most amateur contests are judged by audience applause and the audience that night responded to talent and beauty over tits and ass.  It happens.

Little Darlings is a female- and couples-friendly Vegas strip club. All lap dances (starting at $20) are done fully nude in private booths away from the main floor. Locals $15. Out-of-state $35 (or $15 if you arrive by the free club limo). Call 702-366-1141 to reserve your ride. Check out upcoming Little Darlings events at the club’s website. Full nude, no alcohol, 18+

Hustler Club Vegas has a weekly Monday night “Hustler Honey Search” at 11 pm.  They advertise “$1000s in Cash & Prizes.” I was at the contest one night when the emcee felt the audience applause was tied between two contestants, so they had each girl give a lap dance to a customer on stage to determine the winner.  That was a hoot.  Topless, full bar, 21+

Finally, this isn’t a strip club, but on Sunday nights, Gilley’s country western bar (in Treasure Island) has an amateur bikini bull-riding contest around 10 pm. This one is not an audition for a job at Gilley’s — it’s just a crazy sexy contest and it’s fun to watch.

Some of the contestants are tourists who spontaneously sign up after they’ve had a few.  They strip down to their undies and try to stay on the bull despite the operator’s diabolical manipulations of the beast.  They’re cute when they go flying off.

Other contestants are Vegas strippers on their night off just going for the prize money.  They’re tough to beat, doing their stripper moves and leg spreads on the rocking bull.  The judges tend to score them highly.

9 Responses to “Amateur Nights in the Vegas Strip Clubs”