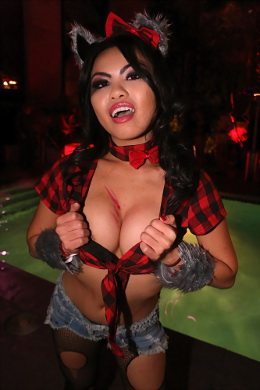 When I was a kid Halloween was a kid’s holiday.  It meant dressing up silly and getting a big bag of candy. I used to dress like a cowboy to trick-or-treat in our neighborhood. This was in Detroit. I don’t think that would be considered a costume in Vegas. There are too many real cowboys in Nevada.

But Halloween in Vegas is not for kids. Throngs of women–tens of thousands of women–up and down the Vegas Strip and on Fremont Street dress to show a lot more skin than they are covering up. Bare flesh is now considered a legitimate costume.

In the strip clubs, dancers peel off Catwoman costumes, getting completely naked on stage at Palomino Club.

This year LAX (at the Luxor) offered an Angels and Demons Halloween Party hosted by Playboy Playmates. Over at the Hard Rock, where they were celebrating the 20th anniversary of the Fetish and Fantasy Ball—with a bondage show this year—I saw a group of women wearing leather western-style vests and chaps, showing lots of cleavage and bare buttocks.

But of all the Halloween night parties in Las Vegas, the Adult Video News (AVN) threw the wildest bash in town. AVN got a head start by bringing in 35 of the world’s best known and least-inhibited adult film actresses and probably a hundred lingerie models just to make sure the Artisan Hotel had enough eye candy. We don’t want Snicker bars anymore. We want tits.

There were girl-on-girl shows occurring spontaneously in the crowd and also on a bed that had been conveniently set up in the Hotel lobby.  I saw average-Joe guys flirting with Tasha Reign and Brandy Aniston and even asking them out on the dance floor.

I saw Cindy Starfall dressed as a kind of cross between an alleycat and Daisy Mae from Lil Abner, acting out her secret kitty cat fantasies by rubbing up against every guy in the room and purring.  Out at the pool there were go-go dancers dressed for bondage boogying away on platforms and a mermaid getting her tail wet. The side of the pool with the cabanas had been roped off for VIP guests who looked like they liked each other a lot. 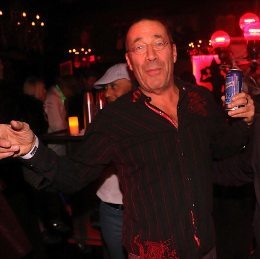 John “Buttman” Stagliano as Himself

John Stagliano was there dressed as John Stagliano, which is wild enough for the guy who invented the Buttman film series. He was hanging out with Vegas writer Richard Abowitz when I saw him.  I’m a Stagliano fan from way back.  I consider his Buttman character to be the most brilliant depiction of “everyman” in film since Charlie Chaplin’s tramp (assuming “everyman” is ass-obsessed).

I talked with him briefly and told him I thought his first film, The Adventures of Buttman, was a work of genius.

He looked like he didn’t hear that a lot.

“I don’t know,” he said. “I always felt I overacted in my early films.”

If you enjoyed Boogie Nights and always thought it might have been fun to hang out with the crowd at one of Burt Reynolds’ house parties, the AVN Halloween bash would be the Halloween party for you. 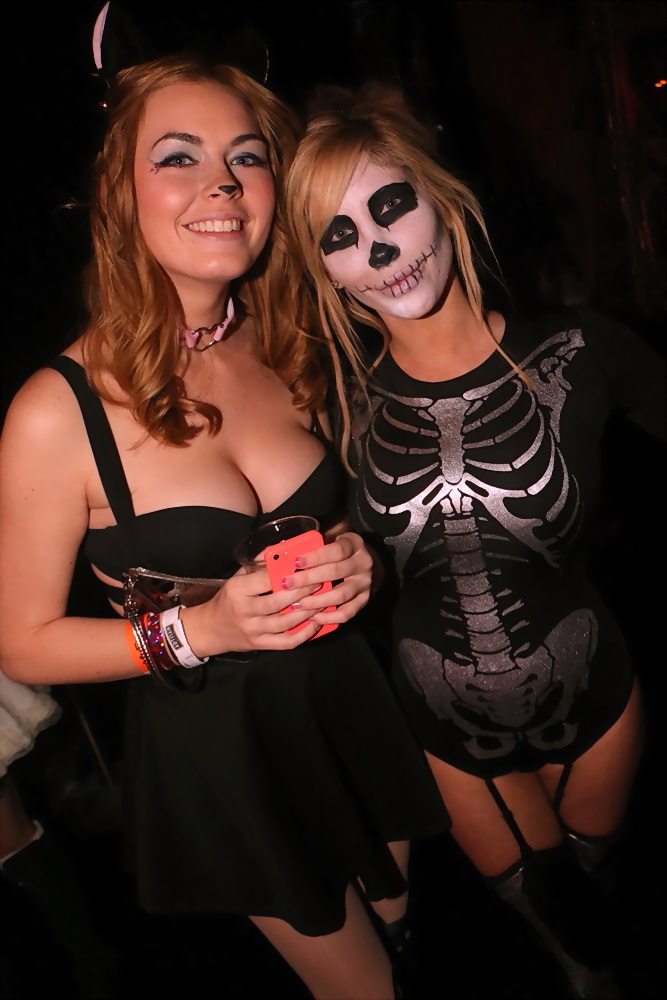 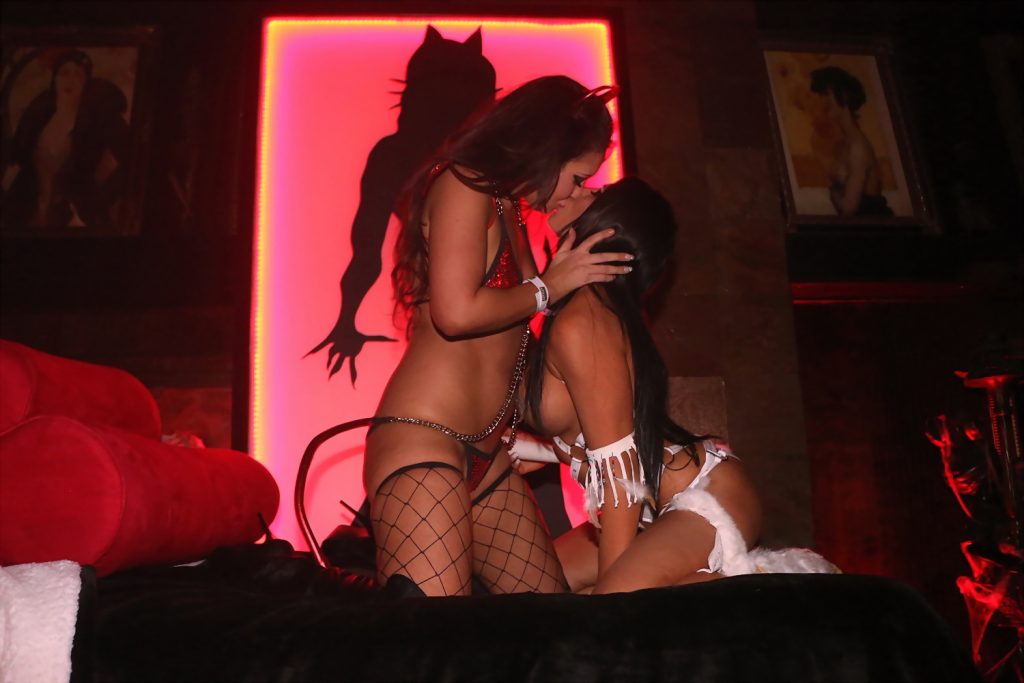 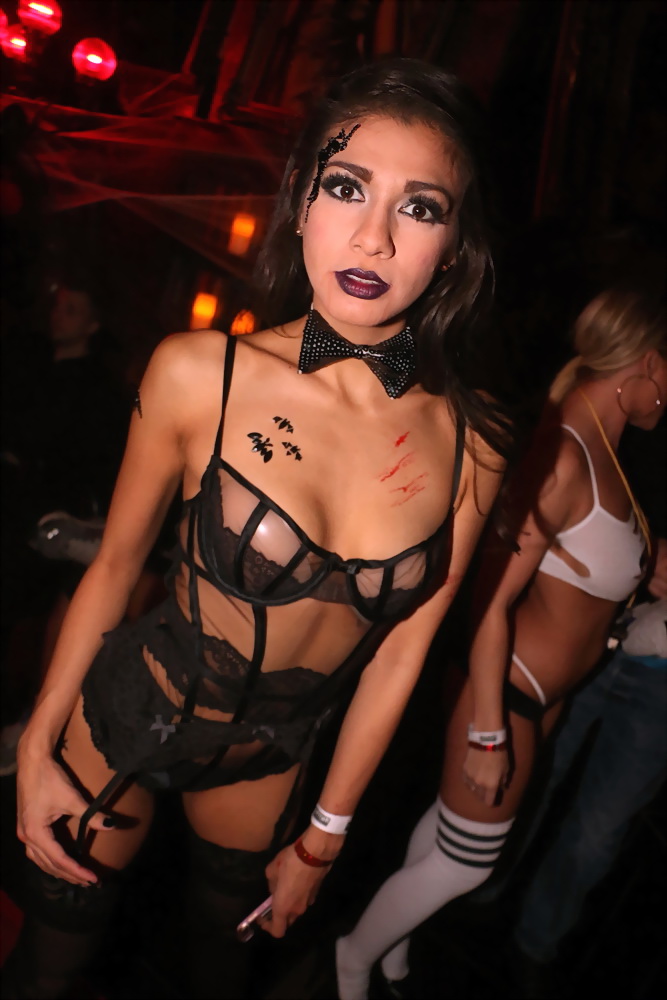 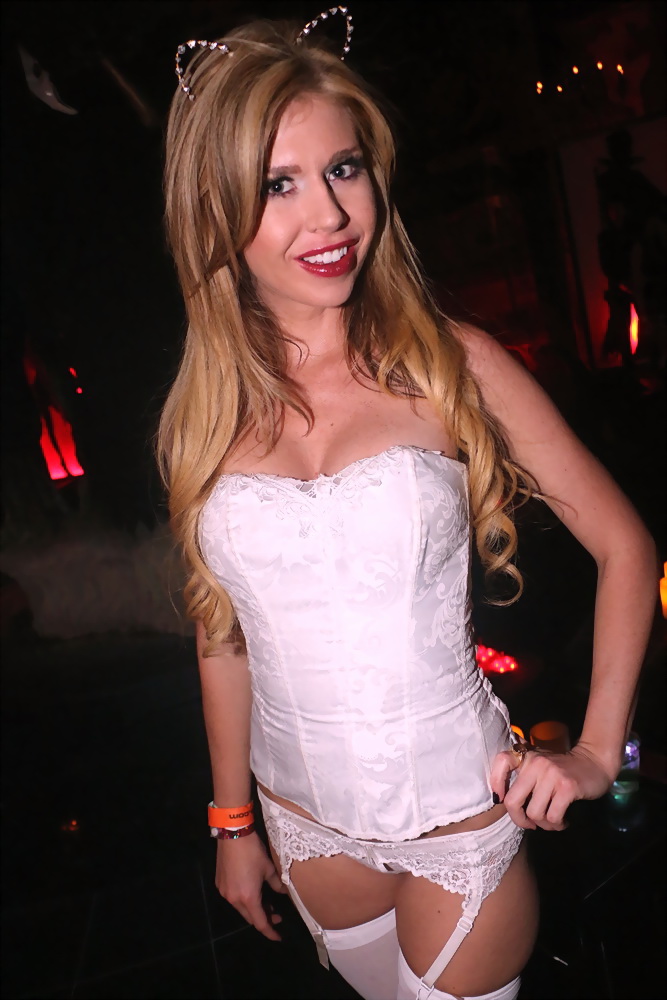 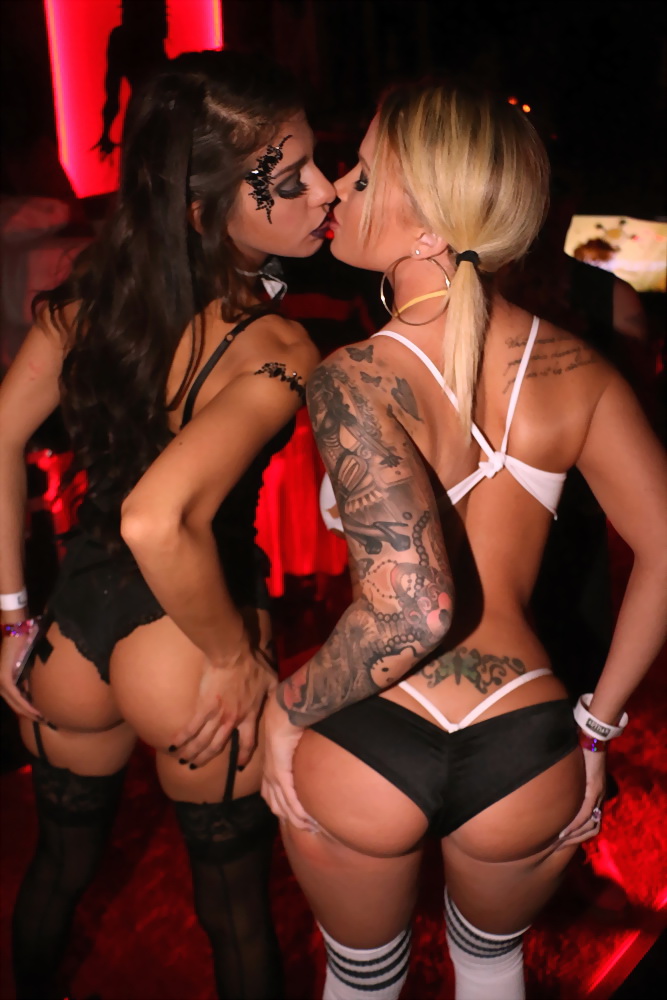 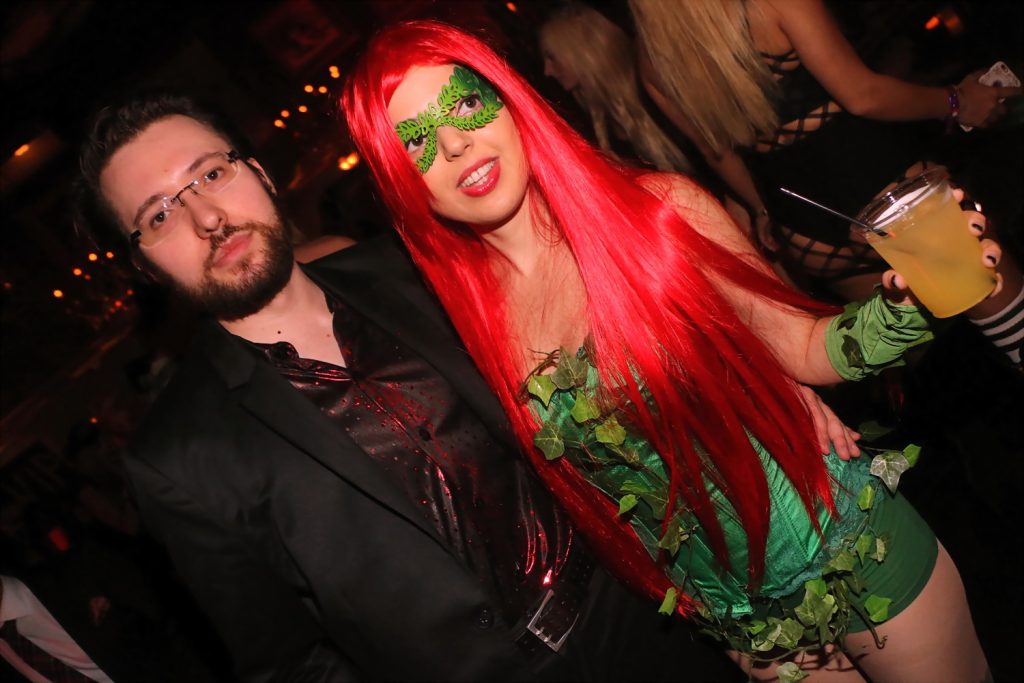 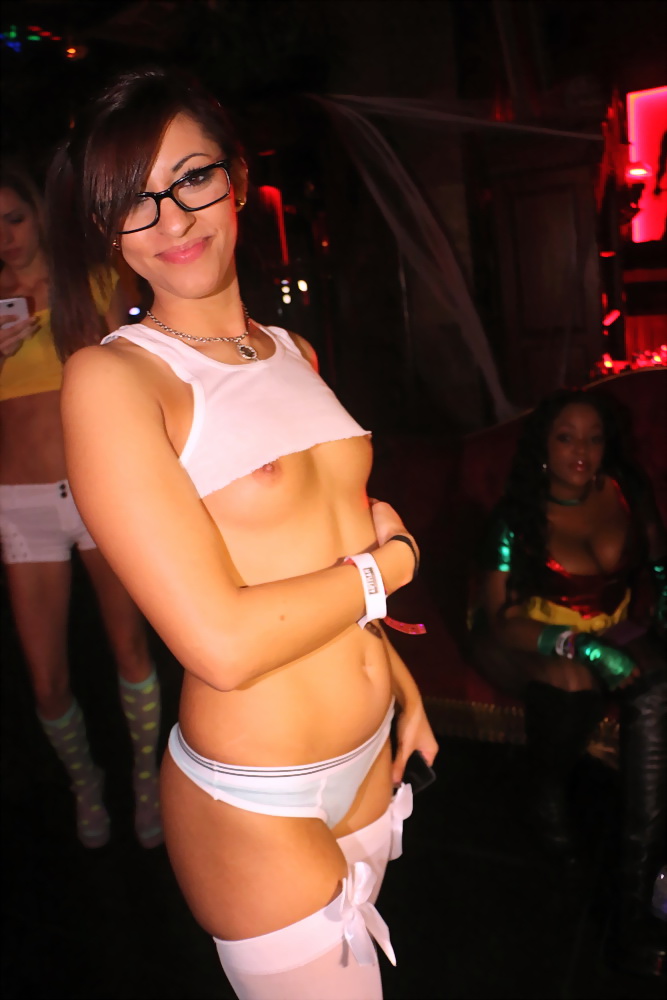 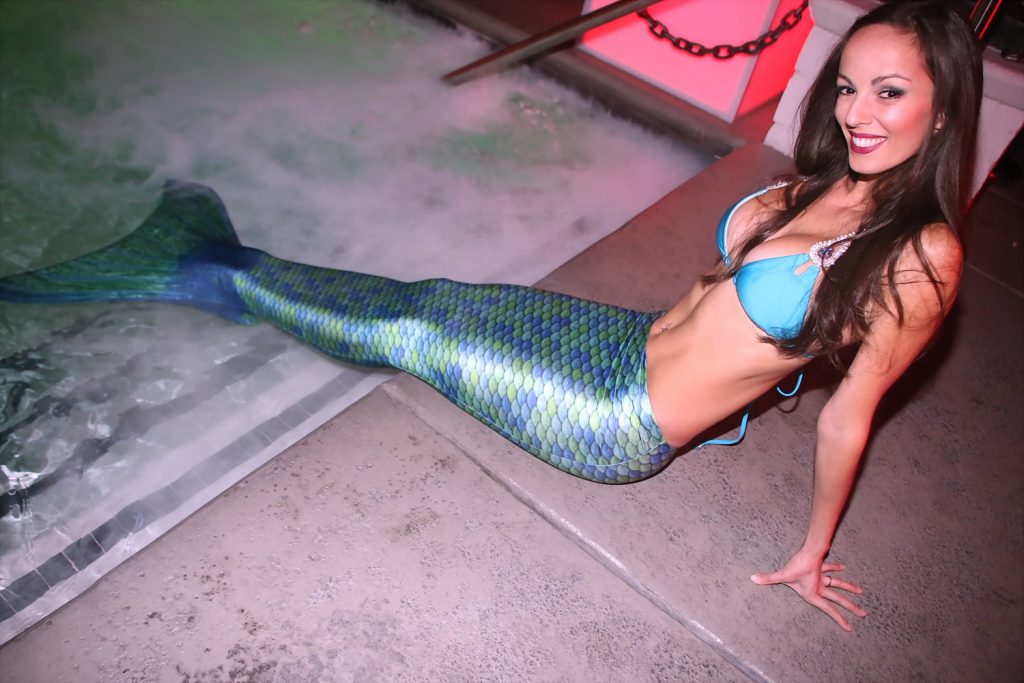 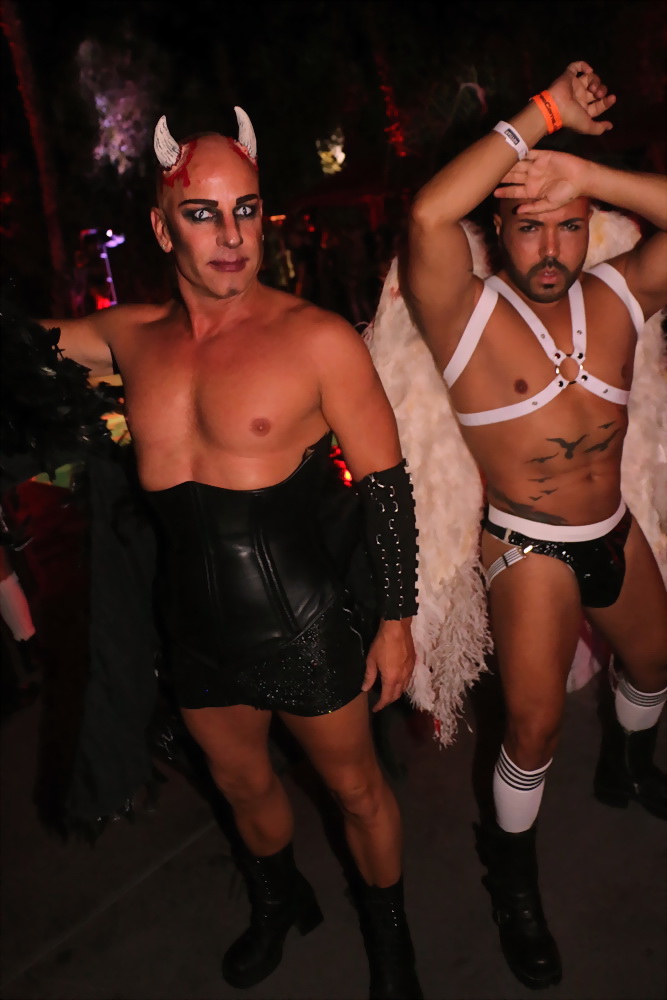 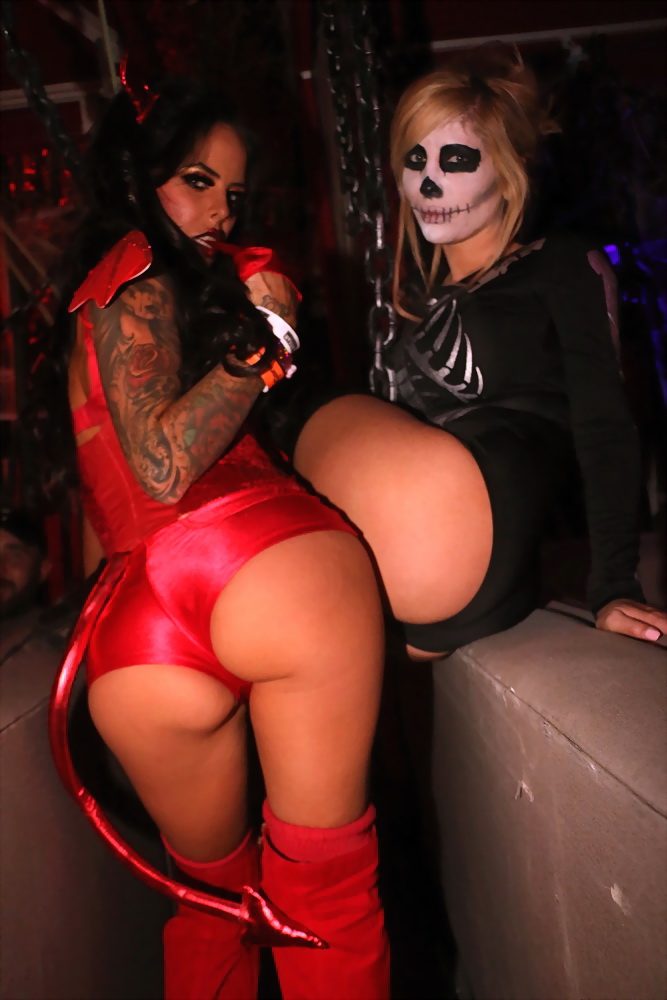 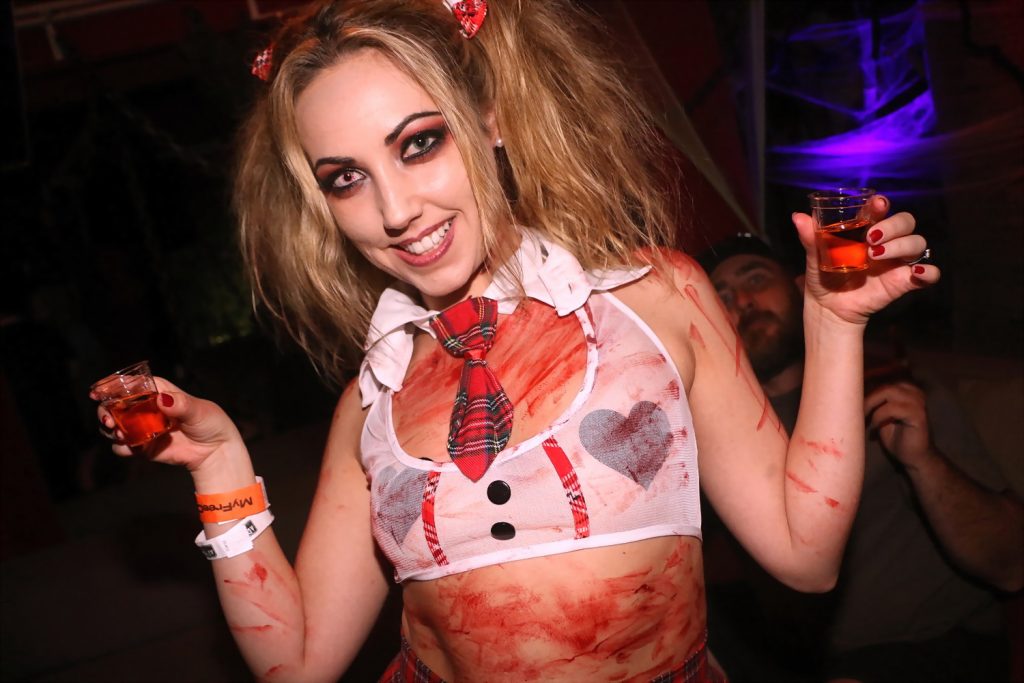 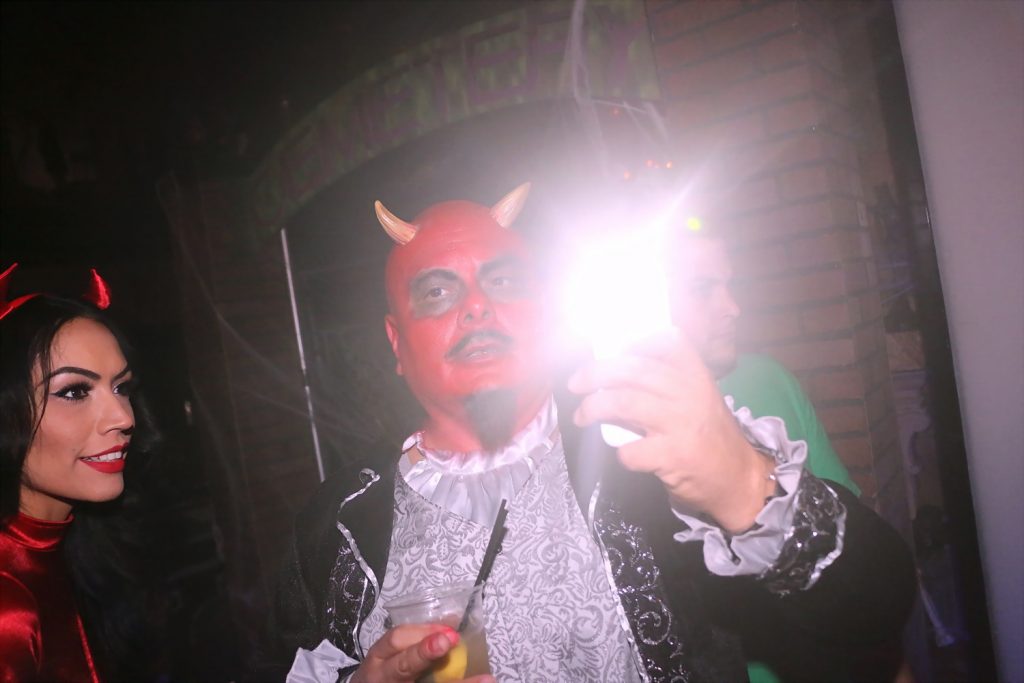