Aussie Heat is the Hottest of the Vegas Hunk Shows 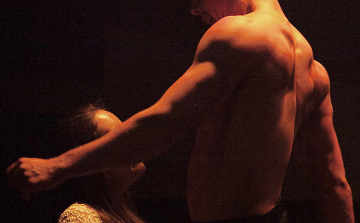 [Note the author on this review is Karen Snyder (my wife). I did go to the show with her, but as I didn’t get any lap dances from the hunks, I asked her to write the review as she had the full experience. I can confirm that the dancing talent of the performers was definitely the best I’ve seen of the male strip shows. The audience is primarily female but there were a number of couples present and even a few male (I presume gay) couples. If you take your wife or girlfriend you won’t feel like the only guy in the crowd. — A.S.]

For years I’ve been asking my husband why men like lap dances so much.  Now that I’ve had a charming, buff semi-nude man straddling my lap and doing hip thrusts, I finally get it.  Best of all, the guys looked like they were having a lot of fun.

The show included the usual audience participation numbers–get a volunteer on stage, feel her up, bend her over, dry hump her–all while she’s lit up with excitement and the crowd is going wild.  But this show, with its younger, hipper audience, takes the mock sex right up to the edge of what a show can probably do without the vice cops coming in to bust you.

The show is housed at the Mosaic on the Strip theater at 3765 S Las Vegas Blvd, Unit G.  That’s about a block north of MGM, across from the Park MGM (formerly Monte Carlo), between the Target and Masala Express.  They share a parking lot with the Walgreens.

This is now the Vegas hunk show I’ll be recommending to friends.  I hope I have an excuse to go back soon.

You can buy tickets here for 7 pm and 10 pm shows Thursday through Sunday nights.  The show has just reopened after the big Vegas Bat Plague lockdown so you must reserve in advance for now.  No walk-up ticket purchases are allowed.  The guys are wearing face shields and not much else throughout the performance for now.

The guys are available for pictures, autographs and flirtation after the show.