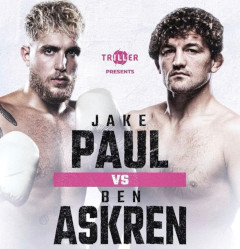 This Saturday night, April 17, Sapphire Las Vegas will be screening the “Fight Club” bout between Jake Paul and Ben Askren. Paul is a YouTube star and former Disney actor who decided to become a boxer rather late in his life (he’s 24), after unsuccessful attempts to convince Dana White to book him into the octagon for a UFC match. He’s already won his first two fights as a boxer, surprising many. Askren is a former amateur wrestler and retired MMA fighter who at 36 years of age has also decided to become a pro boxer, or at least, he’s willing to get into the ring with an ex-Disney brat.

This fight is getting a lot of attention and publicity because it’s just so weird that two boxers that never came up through the traditional ranks — Olympic competition, Golden Gloves, a couple years of amateur bouts, etc. — are going to rake in a ton of loot through pay-per-view because people are starved for sporting events and everybody’s talking about them. I’m not so sure this is a great career move for Jake Paul, who had a brain scan after his second fight that revealed “signs of repeated head traumas.”

The Vegas sports books are favoring Jake Paul to win, probably based more on his age than any other factor. Personally, I’d put my money on Ben Askren, as Floyd Mayweather has proven time and again that age and treachery will beat youth and enthusiasm every time.

In any case, Sapphire will be screening this screwball event in their Showroom. They have numerous package deals available for groups of two to ten guests on their website here. Or call 702-869-0003 for reservations, complimetary limo pickup, more info, etc. All Covid-19 restrictions will be adhered to, so wear a mask. Doors open at 6 pm for the prelim bouts. The main event is expected to start between 8 and 9 pm. Full bar, 21+

11 Responses to “Boxing Fans: Fight Night at Sapphire This Saturday”