Is Your Vegas Strip Club Lap Dance Being Filmed? 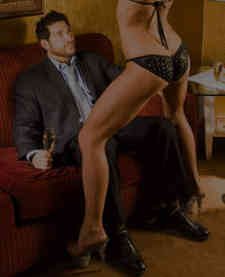 One club manager told me a different story, saying it was to protect the club from legal harassment in the event that a vice cop tries to bring them up on a phony prostitution charge. But prostitution busts usually stem from a dancer’s verbal solicitation of an undercover vice cop for an act of prostitution. Surveillance cameras don’t record sound, and since a vice cop wouldn’t be allowed to actually have sex with a dancer in order to bring charges against her, this explanation makes no sense.

Another club manager agreed with what dancers have told me. “Those cameras are to protect us. We inform the dancers that their VIP room shows are being filmed and if we see them performing acts of prostitution, that’s grounds for their removal. We’re not going to gamble with our liquor license because some girl wants to make an extra thousand bucks a night.”

Many customers are unaware that they’re being filmed in the VIP rooms. I suspect some would find it disturbing and many might feel it was an invasion of their privacy. The worrisome thing from the customers’ perspective is that a tape of the VIP-room activities could fall into the wrong hands. The thought that some jack-off manager might be watching you from his office is also not pleasant.

But keep in mind that a strip club is a place of business open to the public, and as such has a legal right to protect itself via video surveillance. You are under video surveillance in many nightclubs and bars these days, not just strip clubs. This is the world we live in.

Video surveillance in the VIP rooms is a good idea, purely from the perspective of protecting the dancers from drunks and other deviants of the male species. The cameras make many dancers feel safer in a profession that is dangerous by its nature. We would have a much lower quality of dancer without the video surveillance that’s now the norm in the Vegas strip clubs.

In any major strip club in Vegas you can assume there are surveillance cameras in the VIP rooms. You can sometimes see these cameras. They’re often housed in small dark Plexiglas half-domes on the wall or ceiling, like casino surveillance cameras. You might also see small cylindrical lenses mounted high on a wall or the ceiling. A camera may also be mounted behind a mirror in the room, in which case you wouldn’t be able to see it. If you don’t like the idea of being filmed in the VIP, then only patronize clubs that don’t use surveillance cameras in all of their VIP areas. But how do you find this out?

You can ask a dancer if there’s an area of the VIP that’s not under video surveillance. Some dancers know this and will take you there if that’s what it takes to get your business. But asking dancers in Vegas strip clubs for information is always a crapshoot. Dancers fly in every weekend from LA and SF, Seattle, Phoenix, San Diego, Portland. Many dancers are here for the first or second time, have only been in this club once before, if ever. They don’t know what the drink charge is in the VIP rooms, let alone which areas might be out of camera range.

I personally think the risk of public exposure from these surveillance videos is minimal. Many famous film actors, athletes, musicians and nightclub performers have patronized the VIP rooms in the Vegas strip clubs for decades and I’m unaware of any of their VIP room exploits being made public. It’s a credit to the owners and managers of these operations how well they have guarded the privacy of their patrons.