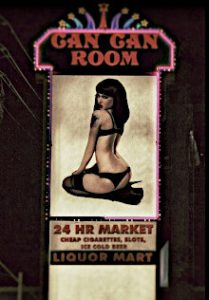 The Las Vegas Review Journal is reporting that the business license of the Can Can Room, a Vegas nude club and tourist trap, was suspended on July 30 after the July 19 arrests of two dancers at the club for soliciting prostitution.  Another employee was arrested for possession of drug paraphernalia.

Now the new owner of the building, Siegel Group, is suing Can Can Room owner Sam Aldabbagh for running an illegal brothel and requiring dancers to perform sexual acts for himself and club customers.

Aldabbagh’s attorney denies all charges.  In any case, the Can Can Room is closed.

My Encounter with the Can Can Room “Madam”

When I visited the club to review it for Topless Vegas (the book), there was a lady at the counter in her 60s (she looked more like a librarian than a madam) who started pushing me to rent one of the club’s bedrooms the minute I walked through the door.

She told me the price was $350 for a half hour with one girl, and I could get up to three girls for more, but she could offer me a special deal of $250 for a half hour.  “Sounds like a good deal,” I said, turning to walk into the main room where the dancers were.

But she stopped me and said she could come down on her special prices.  Now I could have the half hour in the bedroom for $200.  “Fantastic,” I said.  “I’ll get back to you later.  Now I want to go watch the dancers for a while.”

Now, when a man is considering retiring to a bedroom for an hour with three strippers, I just don’t think a ballpoint pen is going to be the deal clincher.

I told her I just wanted to watch the dancers for a while and she said, “If you don’t take me up on one of these special deals I’m offering right now, I might not be able to offer these same deals later.  Whereas, if you pay for one of these options before you go in, you’ll have five hours to choose a dancer or dancers.”

Any savvy Vegas local, at this point, would have turned on his heel and made a quick exit.  But as my $10 admission fee had come out of my publisher’s pocket, and my assignment was to get the scoop on every strip club in town, I had no choice but to soldier on.

As I turned to walk into the main room of the club, she yelled at my back, “How about a hundred?  Just one hundred, if you pay now!”

The main showroom was a little room with cheap fixtures and floor-to-ceiling mirrors on one wall to make it look bigger.  Behind the stage was a tacky plywood star on the wall with a number of burned-out light bulbs.  The room was almost empty.  A few dancers were sitting around with some tough-looking guys along the back wall who did not appear to be customers.

To cut a long story short, I wound up in the club’s Jungle Room with a cute 18-year-old.  One entire wall was covered with leaves — not wallpaper with a leaf design, but actual leaves.  But no sooner had I gone in with the dancer and closed the curtain behind us than another woman entered the room — not the cashier who looked like a librarian, but a woman I hadn’t seen before.  She told me I could pay her the hundred dollars.  I looked at the dancer. She seemed to have no objection, so I forked over the hundred bucks and the woman exited.  But I’d barely put away my wallet when yet another woman entered the room, saying she had come to negotiate.

At this point, I realized what kind of place I was in and that I wasn’t going to get any special bargains.  I was weary of dealing with the negotiating team.  I said I wasn’t interested and this woman left the room.  Then yet another woman entered the room.  She and the dancer started a conversation about what a great deal she was offering me.  Why, only $200 for a bed dance.  That was half price.

I just wanted to get out of the joint.  I took $20 out of my wallet, gave it to the dancer for her trouble, told her I didn’t want the half hour and left the premises.  It had cost me $120 to be in that private bedroom with the dancer of my choice, but I didn’t even get a lap dance out of it.  My publisher was happy though.  I got the story.

End of an Era in the Vegas Strip Clubs

The Can Can Room first opened for business in the 1970s, when the mob still ran the Las Vegas casinos and strip clubs. Then Rick Rizzolo lost control of Crazy Horse Too, Sam Cecola lost control of Club Paradise, and now the Can Can Room is shut down.  These were the kinds of strip clubs where customers got beaten up and their credit cards ripped off.  It’s the end of an era.

I guess it’s still possible that the Can Can Room could reopen, but I’ve never seen a Vegas strip club come back after losing their business license.  Crazy Horse Too, Foxy’s, The Library, Strip Hop, Minx.  They never come back.

Regarding Metro’s arrests, I know in the past Metro has arrested strippers for telling guys they could feel their tits for an extra $20. And “possessing drug paraphernalia?” Apparently, she didn’t even have drugs.

The landlord’s suit is what’s more troublesome for the club. How does the landlord know what happened in the dancers’ interview process with the owner? Or what was required of dancers in the VIP rooms with customers? If the Siegel Group has current or former club employees as witnesses, or their own surveillance tapes as evidence, the trial could be a real circus.

2 Responses to “Can Can Room Closed for Prostitution”