Is Centerfolds’ Burlesque a Game Changer?

After hearing tons of buzz in town I finally saw Centerfold’s extravagant “Touch of Burlesque” show. It far exceeded my expectations!

Las Vegas clubs have been experimenting with non-traditional acts, and add on performances, for several years. The trend started before the “state of emergency’ … and, with a lack of tourists, conventioneers and international travelers the clubs accelerated the trials into magic, comedy, adult themed musical reviews, male strippers and traditional burlesque.  Sapphires and Hustler Club were among the boldest into this expansion of the men’s club entertainment pallet.

Jeepers Superman! Was I in for a surprise at Centerfolds? 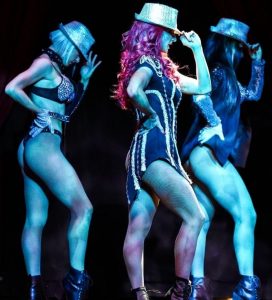 The producers of the show rely on a talented cast of stage dancers from every part of the Las Vegas entertainment community. The staging of their well-executed dance routines cleverly utilizes the unique interior of Centerfolds. The club has a multilevel set of platforms that make this intimate venue feel like a brand-new mega resort showroom. The audience can’t focus on just one stage when there are arial specialists spinning in one place, dancers on three other stages, and balconies occupied by glamourous showgirls.

Each act runs from 5-8 minutes, with powerful dance music on a superior sound system. The costume variety ranges from elaborate headdresses, inspired by the Copacabana, to vintage flight attendants from the time we called them stewardesses. Between each stage number the regular dancers from Centerfolds do their thing in the way we’ve come to love. Get your dance dollars ready to ‘make it rain’ because in two songs the Burlesque show is back on. The artistry and effort put into the show gives Centerfolds a feeling like Havana in 1956. The famous Pre-Castro shows at The Hotel Nationale and the Tropicana is where you think you’ll be. Bring a date!

Here’s why I suggested this strategy might be a club game changer. The place was packed on a Wednesday night. The “Burlesque” show starts at 11pm, and the audience was full of women. Most with dates, some groups of women out traveling in their own posse. The guys who were escorting their dates didn’t look at all like most of us! To put it bluntly, if metrosexuals needed a strip club to feel comfortable in … this is it! I laughed my ass off watching guys, who look like Sociology professors, and Pediatricians, flinging dollar bills at the club dancers. They didn’t throw so well if you catch my drift; not that there’s anything wrong with that.  😉

This had all the ringing of a socially acceptable night out for Mr. and Ms. Prius from Costa Mesa.

I asked some of the dancers what they thought of the crowd that the show brings in; most were favorably 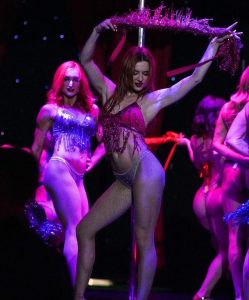 This show is now going hard 7 nights a week. Look for the show producer to keep it fresh for the sake of gathering a loyal audience. The night is especially attractive for locals because drinks are always half price for valley residents.

Also … a special shout out to the club dancers for all of their insights and perspective, especially Iris, who was a perfect ambassador for her club and her colleagues! 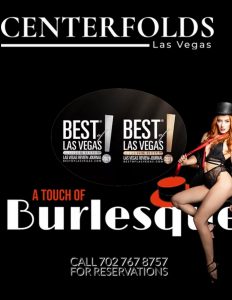 6 Responses to “Centerfolds “A Touch of Burlesque” – A TVO Review”