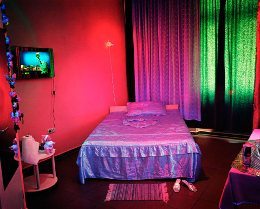 The Scene of the Crime

From the Hindustan Times comes a story of four cops charged with transporting a convicted murderer from his jail cell in Jharkhand to a nearby hospital for a health check-up. After the hospital visit, the cops decided to take a detour (with the prisoner in tow) to a red light district in West Bengal 128 miles away from the hospital.

Somewhere along the three-hour drive to the whorehouse, the cops changed into their street clothes to avoid tipping off brothel personnel that they were policemen. They also got drunk.

As the cops were enjoying the services of the ladies of the establishment, it was just their luck that the West Bengal police decided to raid the brothel that night. They arrested the four cops and threw them into the clink.

Meanwhile, their prisoner got tired of waiting in the paddy wagon and managed to escape, whereupon he somehow arranged to catch a ride back to the Jharkhand jail. He turned himself in after explaining to the guards that the cops who had been transporting him left him alone in the paddy wagon, which was parked more than 200 km away outside a whorehouse in West Bengal.

A phone call from the Jharkhand jail was how the West Bengal police learned that the four drunks they’d arrested the night before in the brothel raid were fellow cops from Jharkhand.

DK Pandey, Jharkhand’s director general of police, said, “We have directed a probe in the matter…” According to the Hindustan Times, “The probe is expected to go into the loopholes in the system.”