The blaze was brought under control around 7 a.m. this morning. No injuries were reported, and no cause for the fire has been disclosed.

Fire authorities said an investigation is under way.  Ya’ think! 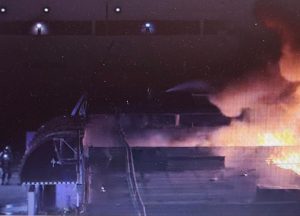 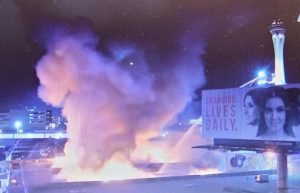 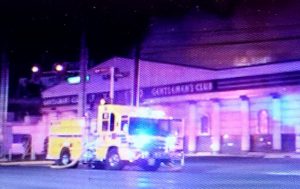 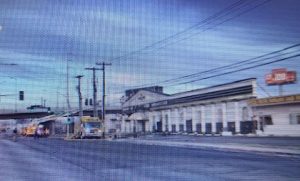 Thanks to our friend, and TVO founder, Arnold Snyder, you will learn more about the history of the Crazy Horse 2 than the readers of any other journal in Las Vegas.

But during the final few years of the former CH2’s existence, the club became a scandal magnet, with patrons getting beaten up, a long-running feud with the auto repair shop next door that allegedly led to a murder, and constant federal charges related to the business activities of Rick Rizzolo, the club’s former owner. (Rizzolo’s initial attorney in Las Vegas, incidentally, was Oscar Goodman, who later became mayor, and whose wife, Carolyn Goodman, now serves as mayor.)

After Rizzolo pled guilty to tax evasion charges in 2006, CH2 lost its liquor license and closed its doors, and the doors remained closed for seven years. Rizzolo ended up going to prison, as did 17 others involved in the business who were convicted of various offenses ranging from narcotics and prostitution to racketeering.

After seven years of darkness, the Crazy Horse Too property was finally purchased in 2013 by Mike Galam, a California businessman. Before the ink was even dry on his new liquor license, however, Crazy Horse III on Russell Road—no business relationship—filed a complaint to halt Crazy Horse Too from reopening under that name, claiming trademark infringement. (Until 2009, Crazy Horse III had been the Penthouse Club.)

Before Galam came along, there had been numerous unsuccessful attempts by other entrepreneurs to reopen Crazy Horse Too.  None got very far because of tax liens on the property and other bureaucratic crap. So the club formerly known as the Penthouse grabbed the name and sort of proclaimed itself the successor to Crazy Horse Too.

CH3 has since become a locals’ favorite, so in a sense they did become a successor to CH2. How much of CH3’s success is due to the magic of that Crazy Horse name, and how much to the club’s generous locals’ policies and all around impressive operation could be argued. But it amused me to see CH3 trying to stop the club whose name they filched.

Galam immediately announced that the club would not be called Crazy Horse Too, but Crazy Mike’s, until that is, some of his advisors (or maybe his conscience) said, “Hey, Mike, you’re crazy. There’s magic in the name. You purchased the name when you purchased the property.”

Galam took it in stride, not about to let a court proceeding delay his reopening. He simply changed the name on the marquee from Crazy Horse Too to The Horse, and on June 1, 2013, after almost seven years dark, the club was once again alive and kicking. I talked with Mike Galam on the night of the grand reopening and he said he intended to fight CH3’s complaint in court.

Finally, in February 2014, Galam won his case and Crazy Horse Too has its name back.

Then, the police raided the club and closed it down due to too many violations. I will post developments as they develop.

4 Responses to “Crazy Horse 2 Burns Down”