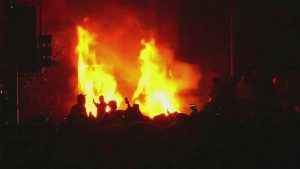 In the excerpt below, I am particularly taken by the Democrats’ use of quote marks around “legitimate” in the phrase “legitimate outcome”, as they are discussing using riots to make a Trump win look illegitimate.  That, of course, is the same tactic Democrats used in 2016 as part of their strategy for delegitimizing Trump’s presidency.  Antifa-BLM rioted in cities all over the country immediately after election day and during Trump’s inauguration.

They had already rioted in cities like Chicago, Albuquerque, Phoenix, San Jose and L.A. at Trump rallies during the presidential campaign to delegitimize Trump as a candidate.  Here’s the excerpt (click to enlarge):

You can read the entire 22-page document through the link.  I know you would appreciate the opening paragraph, which predicts chaos around the election outcome.

More quotes from the document:

“This may well be a street fight, not a legal battle.”

“Technocratic solutions, courts, and reliance on elites observing norms are not the answer here.”

“News media has a particular responsibility to ready the public…”

In other words, they intend to beat us up and use the narrative of their fake news partners to force us to submit.

Of course, it’s the Democrats themselves who are deliberately trying to create chaos around the election with mass mail-in voting.  In states where mail-in voting was used during the primaries, 20-25% of mailed-in ballots were rejected, thousands of dead people voted, and millions of ballots were sent out to dead people and people no longer living at the ballot address, to be picked up and used by political operatives to commit vote fraud.  A judge in New Jersey has ordered an entire election to be thrown out and done over due to evidence of mass mail-in vote fraud.

In Detroit, the vote count once again exceeded the number of ballots returned in 72% of precincts.  Detroit election judges just run Democrat ballots through the count machines multiple times.  The same vote fraud method showed up in the 2016 Jill Stein recount there.

So that’s the Democrat plan for November.  They know they can’t win, and rather than build coalitions and offer a platform that voters like, they intend to throw the entire election and government into chaos so they can use their Antifa-BLM terrorists and fake newsers to impose whatever policies they want.

Gore vs Bush in 2000 was practice for this plan.  So was the Jill Stein recount strategy.

I’m posting this to show you, with the Democrats’ own document, the lengths to which Democrats are willing to go to seize power.  But I don’t believe their plans will work.  For one thing, the GOP has been winning lawsuit after lawsuit against mail-in voting.  Each loss reduces Democrats’ ability to create election chaos.

For another, Trump and his trusted advisers know the Democrats’ plans and are fully engaged in countering their information war.

Third, Trump’s federal SWAT teams are rounding up Antifa-BLM leadership and their most violent thugs even as I write this.  When state law applies rather than federal law, and state or local authorities are failing to crack down, Barr is using the Travel Act to bring serious federal charges against Democrats’ Antifa-BLM terrorists who cross state lines to riot.

As for “street fight,” watched the riot vids lately? The ones with plainclothes law enforcement collecting evidence? Stealth arrests by US Marshals in Portland and Kenosha? Oregon State Police now deputized by the Feds? That means Barr found a way to hit the Portland thugs with federal charges, making it irrelevant that the Portland DA is blocking local prosecutions.

We have confirmation of that in the federal charges filed against 31-year-old Michelle Peterson O’Connor, a Portland hotel sales manager, who has been federally charged with civil disorder after assaulting a cross-deputized officer during a violent Antifa-BLM riot on August 24. This was the first confirmed federal charge in Oregon involving a state trooper.

And she’s not the only one.  Dakota Means, who assaulted a federal employee with a gun near the federal courthouse in Portland, has been federally charged by federally-deputized state police, along with dozens of other Antifa-BLM terrorists, for throwing bombs, assaulting officers with baseball bats, and other crimes committed in the riots there over the summer.

Many of these thugs are on their second or third set of serious federal charges, which means higher bail and stiffer sentences.  A number of them were charged with felonies for their crimes in the Antifa-BLM riots in DC on the day of Trump’s inauguration.

And Riot Kitchen, a violent Seattle Antifa group, got hit with the Travel Act en masse by U.S. Marshals in Kenosha, where they had traveled with a busload of Molotov cocktails and commercial-grade fireworks that they claimed were meant to cook food.  The Kenosha riots died right after their arrest and the CHAZ riot crowd has become notably sparser.

President Trump has just ordered federal agencies to report to the Office of Management and Budget what federal funds can be withheld from New York City, DC, Seattle and Portland, where local government officials have permitted anarchy and defunded police.  For example, federal funds directed at law enforcement or the justice system could be redirected to other cities because they are not being properly used in the targeted cities.

NYC gets about $7 billion a year in federal aid.  Portland gets $252 million, including money for police operations..

Democrat-controlled city budgets have already been hit hard by 5 1/2 months of Bat Plague lockdowns.  State and local politicians had been expecting a Pelosi bailout.  But as usual, she blew it.