Dennis Hof, owner of seven legal brothels in Nevada, star of the HBO reality series, “Cathouse” (filmed in one of his brothels), and author of The Art of the Pimp–his rags-to-riches-as-a-legal-pimp story published this year–has been in the news a lot lately. But it’s not because of his book.

Also, it’s not because he’s offered to match the student loan payments of women who work at one of his brothels. This was widely reported in the media a few weeks ago when the offer was made, but the story quickly took a backseat to the Lamar Odom soap opera, which has been front and center in the mainstream media since Odom OD’d shortly after Hof’s student loan repayment offer.

Some of Hof’s critics said that this is just another publicity stunt. But if so, it’s a damn expensive publicity stunt because the money Hof matches will come directly out of the house share of the girl’s sales. It’s also a damn valuable publicity stunt for any woman who takes him up on it.

The two girls who were with Lamar Odom were to split half of the $75,000 Odom agreed to pay the house, or $18,750 each, for 4-5 days with a famous basketball star / reality TV show star. It’s hard to make that kind of money outside of show biz or pro sports.

Another criticism is that Hof is trying to lure young girls into the profession and they won’t be able to get out–which is to say that when they see the money they earn and the few hours it takes to earn it, compared to anything else available to college graduates in this economy, they will decide to keep working as legal hookers even after their 60-day loan matching agreement is over. 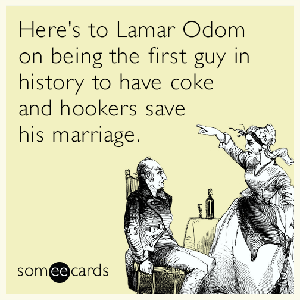 The important thing to remember is that Khloe’s taking Odom back, Hof’s threatening to sue Khloe for the $75K if Odom doesn’t pay up, the two girls who were with Odom disappeared after he OD’d but one of them came back and said she had nothing to hide because she saved Odom’s life, but Hof fired both girls anyway and said they violated house rules and should have reported suspected drug use to him, and most interesting of all is that Odom had the Love Ranch employees who dealt with him sign confidentiality agreements, and where the hell is the confidentiality?

Has the world come to this? Can’t a man OD in a brothel anymore without getting bad press?