ED Expo 2022 was back in Las Vegas, August 14-17 at Planet Hollywood. The ED Expo (Exotic Dancers Publications) is the strip club trade association’s annual meeting. The agenda is designed for industry owners and managers, but the social activities are perfect for strip club fans and followers. 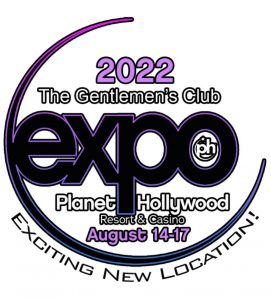 There were official and un-official gatherings at some of the best clubs in town …. There was an official pre-party at Hustler Club on Saturday, Aug 13. Scores announced on social media an “un-official” party on Aug 13. The official parties started on Sunday night at DejaVu, and concluded today at Spearmint Rhino in the afternoon.  It’s been three years since the group last gathered together in Las Vegas for their annual August meeting.

Here’s a recap of the very well attended event.

Party and Dance Competition at DejaVu

Sunday night’s party at Ken Kummerow’s DejaVu was packed; in fact, the club was told to expect 150 Expo guests, and it looked like at least 500 attendees, exhibitors, dates and performers showed up to see the EDI Dancer of the Year competition! The four finalists were Ms. Parker, Shar Zayn @shar_zayn, Katie Sutra @katiesutra, Michelle Lynn @michelle.lynnx1031. The feature dancers used fire, water, paint and wax to make themselves stand out in the fierce competition. Mr. TVO was hit with paper, water, currency and blue paint …but the hot wax did not catch my clothes or shoes. I do think someone’s cash counter was ruined by the wax on the Michelle Lynn’s cash. 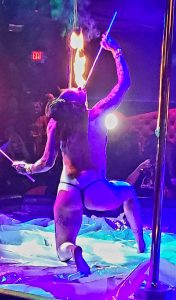 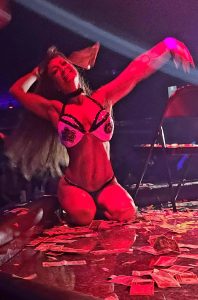 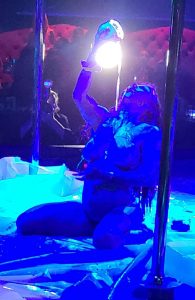 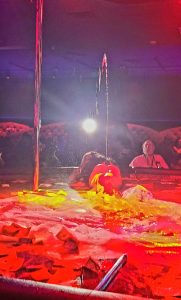 Water … from a squeeze bottle! 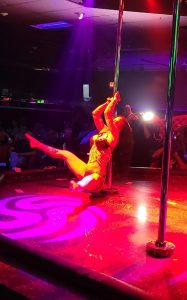 Monday’s session focused on club security, conflict de-escalation, bar management, and preventing theft and waste. The afternoon was devoted to the Exhibit Hall which featured over 60 exhibitors. The range of industry vendors included …

The exhibit hall was well attended and lively. ED Expo set up a pole dancing stage and had DJ’s working the 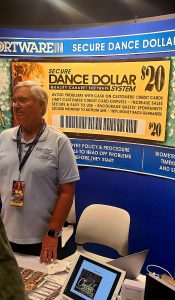 crowd. My friends at Palomino mentioned that there were fewer feature dancers exhibiting vying for the attention of clubs and bookers this year. 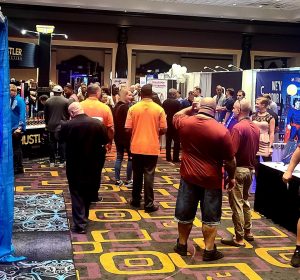 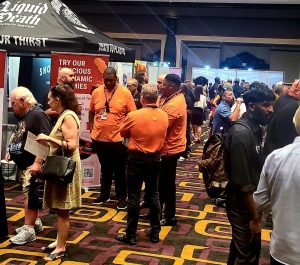 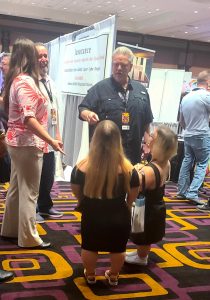 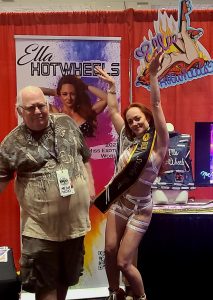 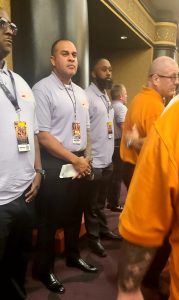 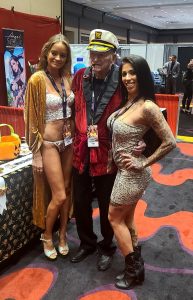 Was that Hugh Hefner?

Monday’s official party at Hustler was jammed from 10pm to 1am. A special performance of Jennifer Roma’s 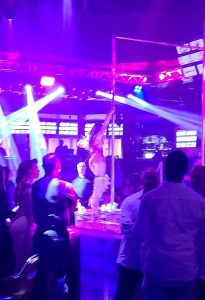 new Exxcite Show was a big hit. Her show was followed by an impressive cast of feature dancers including Rubber Doll, Hayla Faye and Ella Hotwheels. With hundreds of dancers in the audience it became a dollar blizzard. Buckets of singles rained down on each feature dancer. 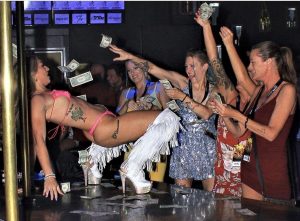 The Keynote was a very provocative speech by RCI Holdings Eric Langan. RCI is the publicly traded owner of Rick’s Cabaret brands, Scarlett’s, Vivid, Tootsies, Club Onyx, Jaguars, XTC Cabaret and many other clubs. With 50+ clubs, and almost $200 million in annual revenue, RCI is a powerful voice in the industry, and a thought leader on trends and best practices. Langan’s focus for the customer experience is based on a profile of young men interacting with clubs in a very different way than the generations of men before them. 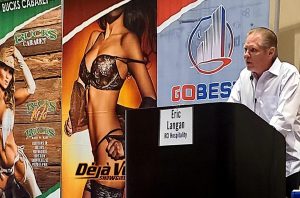 Eric offered the ideal that popular media has created a very negative image of men’s clubs as smoky, depressing, dangerous, seedy and misogynistic. These same young men spend an inordinate amount of time in an unrealistic internet world of alter ego’s connecting with others in cyberspace. He says they will have friends they never meet in person. They become “avatars” with fake names, idealized characteristics, and diminished social skills once they are forced to be in the real world. He explained that RCI seeks to create a world that compliments the expectations and needs of these “Avatar men.” For example, RCI has begun to inject themselves into these communities as a place to meet, party and find female companionship. The avatar might not know how to talk to a real girl … but an RCI dancer is trained to talk to him and make him feel comfortable.

The second theme Mr. Langan pressed on was the advantage of being acquired by his firm. He cleverly said, don’t think of it as leaving your business, thinking of it as joining a winning “team.” On one hand he held a view that it would be increasingly difficult for independent clubs to cater to this new customer. On the other hand, he offered a vision of a tax reducing transaction through a stock fueled acquisition. He describes those sellers who took stock as reaping a doubled payout with RCI stock. He said, other club sellers agreed to annuity payments. He described one owner as setting up a structure where, “he sits on the beach while $180,000 checks arrive in his mailbox each month… for the next ten years!” He was not subtle in these points!

Tuesday evening was the Annual Awards show next door at the Paris Hotel Theater. The ED’s Awards Show is the only national awards show for the multi-billion-dollar gentlemen’s club industry and is produced by ED Publications. The ED group filled the large theater. The women were dressed like it was the Academy Awards… the men were a mix of dark suits and sloppy guys who can’t seem to grow up and act like an adult. Mrs. TVO always wants to ask the guy, “did your wife pack that special Packers T-Shirt?”

The Awards Show was hosted by top comedian Bret Ernst, who is on Netlix’s number-one show “Cobra Kai.” Recently listed as a top 5 comedian working today by Standupcomedyreview.com and “#16 of the 101 Funniest Comedians Working Today” by Heckler.com and TBS. Ernst was a fantastic entertainer and emcee. He did two sets in between the awards and the two dance competition finalists, Shar Zay and Ms. Parker. 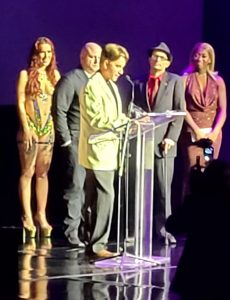 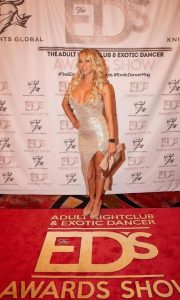 On Wednesday afternoon the last event was a Lingerie contest for ED Expo participants at the Spearmint Rhino. Over 30 women strutted their stuff for the judges. The crowd loved the celebrity MC, dancer Bambi Wilde.  The winner was a cute dancer from Sapphire, NYC. 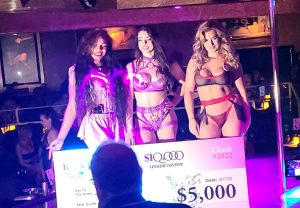 Next year’s event will be held at the Paris Hotel & Casino; August 20nd-23rd