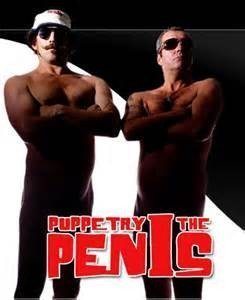 Puppetry of the Penis Poster

The show was developed by two comedians in Australia in 1997 and has been playing in Australia ever since.  It has also had successful runs in the UK, Denmark, Belgium, Israel, Canada, and Italy, as well as in New York, Chicago, Boston, Los Angeles, and San Francisco in the U.S.

What’s amazing to me is that nothing the performers do is actually difficult, dangerous, or anything other than silly, yet they keep an audience of men and women laughing for the better part of an hour, with no one being offended or walking out, despite their being naked throughout.

I’ll review the Vegas show when it opens, but based on the YouTube vid, I’d say if your wife or girlfriend wants you to take her to a male strip show, this would be the one I’d recommend. It’s fully nude and funnier than any of the male strip shows currently playing Vegas.

The show opens on April 14, which is a Tuesday night, but after that it will show every night except Tuesdays. You can purchase tickets in advance here.