Customers would pick their prostitutes from photos on an iPad and would be serviced while sitting at the bar. By the time you finish your coffee, you can zip and go.

Prostitution is legal in Switzerland, as it is in Nevada, with prostitutes requiring government permits, so this is a legit business. The cost of the oral service will be 60 Swiss francs ($61.25), plus $5 for the coffee.

According to International Business Times, there is political opposition to this business, with some attempting to halt the licensing before the cafe opens.  Others complain that allowing customers to choose prostitutes from an iPad “would effectively decriminalize pimping.” Prostitution is legal in Switzerland, but pimping is not.

But I don’t get the argument. Switzerland has lots of legal brothels. If a customer picked a girl in a brothel from an iPad gallery, instead of from the lineup, would that be breaking some kind of anti-pimping law? 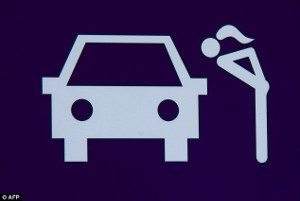 According to the Daily Mail (UK), Switzerland already has “drive-thru” brothels that have been in successful operation for two years. Customers pull into a covered stall, the girl comes to the car window and negotiates the price, then she gets into the customer’s car to perform the service.