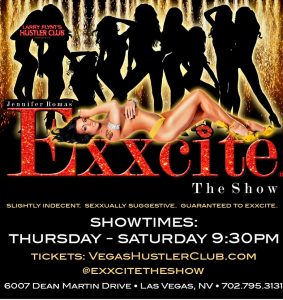 showcase featuring a troupe of seven spectacular performers, plus the always amazing star herself, Jennifer Romas.

On a rainy Thursday night in August (yes, a rainy summer in Las Vegas!) Mrs. TVO and I had ringside seats for a dazzling performance by seven beautiful dancers and feature singer Rockie Brown. I say, ‘ringside seats,’ but TVO readers should know that every seat in this venue is wonderful for this immersive entertainment experience. The heart shaped center stage at the Hustler Club allows the performers to launch themselves above you, around you and directly in front of you. The two-story stripper poles help create magical entrances. The luxurious  arial silks allow several skilled performers to fly above the audience in a stunning airborne ballet. The large stage allows the cast the room to kick, bend, twist and strut.

The show opens with charismatic singer Rockie Brown setting the tone with a song I noted as the “hoe song.” 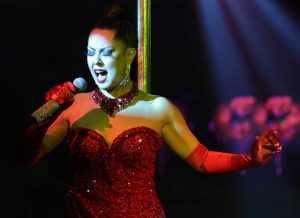 She’s aided by stunning beauties in kinky military outfits that hug their bodies and accentuate their curves. The quality of the costumes throughout the show help remind you that you are in Las Vegas. Not a penny is pinched in the large number of outfit changes from the cast. One of our favorites was the sexy French Maid who tidy’s up the cash thrown from the crowd

Perhaps the hottest number was when three dancers “ride the pony” horse device. Mrs. TVO said something to the effect that dancer Schyler Massey, and her fellow cowgirl Courtney Friedersdorf , had the best bodies she’s ever seen in her life. I couldn’t argue at that moment.

The music was upbeat, including Jen Romas’ to Michael Buble’s “It’s a New Day,” Screamin’ Jay Hawkins’ “Spell on You,” Rihanna’s “S&M” … and more from Foreigner and Bruno Mars. Aerialist Jessica Delgado will take your breath away with her daring work on the arial straps. 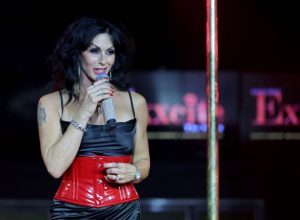 Dancers in high white go-go boots made a splash, and somehow Jennifer managed to not drag Nancy Sinatra’s “These Boots Are Made for Walkin'” out of the record closet. Perhaps the torch is being passed to a new generation of Las Vegas icons like Mr. Mars, and his hit “Runaway Baby.”

Just when the stylish production numbers have run on top of each other Exxcite shifts into a different gear. She brings us another arial act from raven haired Svetlana Ghetman.  It was great to hear 80’s hit “Tainted Love,” and Lady Gaga’s “Bad Romance.” These songs included a wild flamingo train dress on Rockie Brown, and the coolest hoop miniskirts you’ll ever see. If you are thinking this is a New York fashion show … don’t worry, the dancers all have beautiful bare breasts that remind you that you are in a Las Vegas strip club. There are enough high heels, perfect butts and leather whips to please the men!

American rock fans will enjoy Warrant’s version of “Cherrie Pie” and the patriot panties on Jennifer and several of the other girls. The pole work by Ms. Romas is remarkable. Her strength and grace is timeless. 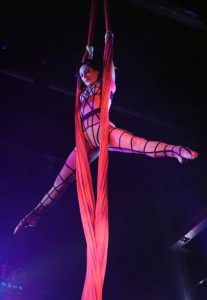 An hour into the show the sound of sirens, and the cast in hot red outfits, signal the final dance like a firework show finale.  They go out blazing!

As always, Jennifer Romas’ attention to details, staging, music, costumes and pacing are impeccable. We loved the show and would happily see it again. 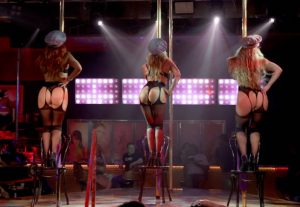 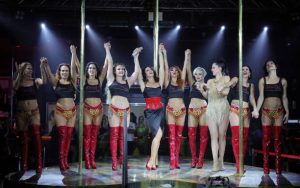 One piece of great news for TVO readers around the country … if there is a Hustler club near you there is a good chance that a touring version of Exxcite could be coming to your town. Romas’ and show production partners, Go BEST, have developed a new touring show concept with plans of a nationwide expansion.

“I am elated to be expanding and growing my company alongside my amazing partners at Go BEST, led by Jason Mohney and an incredible army of female entrepreneurs.” said Jennifer Romas, when asked about her new show expansion. “To be given the opportunity to showcase my craft, develop a new show concept on a national scale, and to bring elevated choreography elements & theatrical entertainment to raise the bar in entirely new markets is a dream come true. It’s also a wonderful feeling to be able to employ an entirely new team of talented individuals, alongside a touring production.” 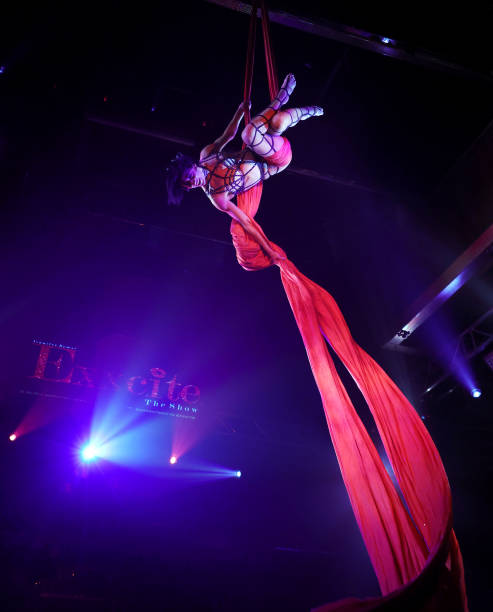 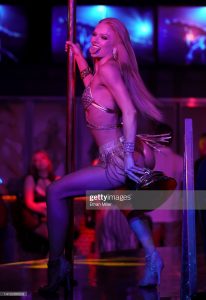 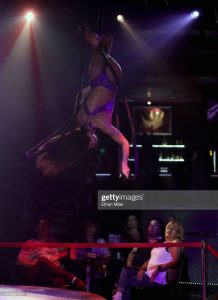 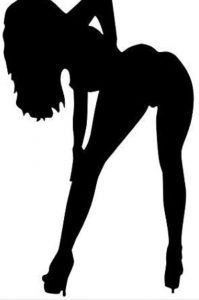