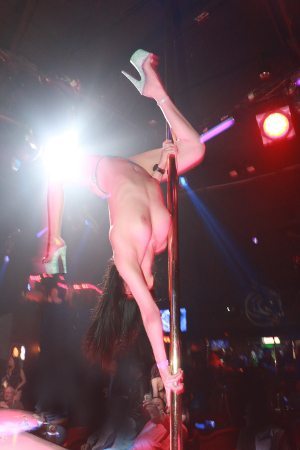 Some Las Vegas strip clubs bar unescorted women—and by unescorted, I mean by a man. There are two main reasons for this policy.

Second, the clubs want to avoid embarrassing scenes where angry wives or girlfriends come hunting for their men. Some guys think of strip clubs as safe havens from the real world and their real lives. That’s why they call them “gentlemen’s clubs.” They’re traditionally for men only.

But as more men these days are coming into strip clubs with their wives and girlfriends, more and more clubs are allowing in unescorted women, as long as they seem to be out on the town looking for fun. Also, young women who look like dancer material may be allowed into a club if they say they want to check out the place because they’re considering auditioning there.

In querying doormen, cashiers, and managers, I discovered that not all clubs have a strict policy in this regard, basing their decision to allow entry case by case. In general, these policies are loosening. 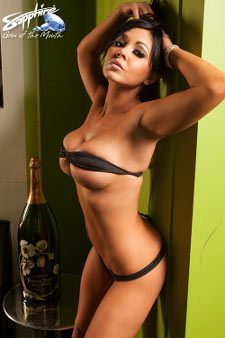 Sapphire Offers the Wildest Lap Dance Scene in Vegas, Including for Couples

But if you’re looking for a high-end club where you’ll see a number of other couples, so that the female half of the couple won’t be the only woman there, these clubs are the best choices.

Floyd Mayweather’s Girl Collection:  Floyd says:  “Ladies are definitely welcome with or without a male companion.”

Hustler Club: There are often couples and women in the audience.

Little Darlings: If you can live without alcohol, the stage show is second only to Palomino Club’s, making this another excellent club for couples. Age 18+

Treasures: Las Vegas’ most luxurious strip club is a definite attraction for women and the lap dances and VIP shows are the most sexual in town for couples’ exploring a woman’s bi-curiosity or threesomes at a Vegas strip club.

Palomino, Sapphire, and Treasures and have been actively inviting couples to their club, and you’ll virtually always see couples in the club at peak hours.  Club Lacy’s has always been a mixed male/female party.

These are the high-end Vegas strip clubs where women are not only allowed without male escorts, but are welcome guests.  You will almost always see numbers of unescorted women having fun in these clubs, in groups and alone, and the dancers lavish attention on them.

Hustler Club: Female friendly for women alone, in female or mixed couples, or in groups

Little Darlings: Female-friendly for women alone or in female or mixed couples and groups. Age 18+

Palomino Club: Exceptionally female-friendly for women alone, in female or mixed couples, or in groups

Palomino Club, Girl Collection and Little Darlings have become quite popular with women arriving alone, in female couples, or in female groups.  The dancers will treat you well.

At off-peak hours, there will typically be very few women in any Vegas strip club unless there’s a special event or party going on.  But women unescorted by men will still be welcome and well-treated at these clubs.

As an entertainment capital, Vegas is populated by a large proportion of performers, a demographic that’s always lived on the edge of social and cultural propriety. Strippers in this town are accepted by the mainstream population as an integral part of this city’s make-up.

Las Vegas is the only city in the world where women can go topless at a dozen pools open to the public, where many of the nightclubs have stripper poles that can be used by patrons (who sometimes strip!), and where even some of the hotels—Hard Rock and Palms to name two—have suites with stripper poles in the rooms.

Many casinos now have “party pits” where patrons can play blackjack out in the main casino area while scantily clad dancers gyrate on poles overhead. And one enterprising local company—Siena Entertainment—offers a 30-passenger party bus for rental by the hour that has stripper poles for use by the partygoers.

I suspect a day will come when all strip clubs will have a mixed gender clientele and no one will think anything of it. For now, women simply want the right to go to strip clubs, to dance like strippers in the nightclubs, and to go topless in the adults-only public pools, and the progressive venues in this town are trying to accommodate them.

You may also be interested in Tips for Couples Going to a Strip Club Together for the First Time, which includes a section on couples’ lap dances.