“The 2020 Political Cycle is being Used to Mask a Revolution” 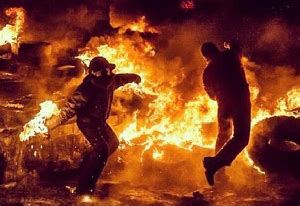 I’ve mentioned before that a full-scale “color revolution”, or Democrat Party insurrection, is being attempted in America right now.  I stand by that.  I’ve pointed out how violence committed by the Democrats’ Antifa/BLM Sturmabteilung has been used for five years now to suppress the freedom of speech and assembly of the radical left’s political opponents.

I’ve linked to videos of George Soros telling the Davos crowd in January 2020 that the U.S. is in a “revolutionary situation” and Trump would be removed from office before election day.  In May, Soros again said the U.S. was in a “revolutionary moment”, but this time blamed it on Covid-19, which wasn’t a concern at the time Soros urged revolution at Davos.

Now today Rich Higgins, former Director for Strategic Planning on the National Security Council, posted an alarming thread on Twitter, titled About “Color Revolutions”, warning of a leftist plot to cancel the 2020 elections.  Because I’ve heard this from another source already, I’m going to print the entire thread here.  A second source has confirmed portions of Higgins’ thread.

You’ll find a brief biography of Higgins below the thread, followed by a video of the first Antifa/BLM assault on the White House in late May.  There are members of the Chinese Communist Party’s People’s Liberation Army visible in that video.

The current domestic political situation has decomposed into a national security issue. The 2020 political cycle is being utilized to mask the extremely hostile revolutionary nature of these events. Even the violence is distraction.

Current intelligence indicates that a siege of the White House may initiate on or about September 17th and culminate in a November 3rd election crisis that carries on past the election. The revolutionary operational design has three key components that must be factored in.

Finally, the Republican Party and GOP Establishment must be under the positive control of the Revolutionary narrative and remain passive. If the revolutionaries can succeed in controlling these three components of their operation, they can be successful.

The control of the media and other communication is used by revolutionaries or their supporters to amplify crisis (i.e., election fraud) solutions selected by the revolutionaries (i.e., remove Trump).

These narratives are amplified by the media to silence and control GOP opponents and to compel action by the bureaucrats. The history of sabotage and subversion directed against the campaign, transition, and administration during the first term should serve as warning.

Numerous senior officials of the Democrat Party are openly calling for revolution and intend to fabricate a Constitutional crisis around the election and parallel street mobilization in furtherance of their efforts.

This plan includes the utilization of various revolutionary actors that have been observed conducting operational and informational preparation of the environment for the past several months.

There are two key vulnerabilities to color revolutions. Prior knowledge and united opposition. ACTIONS: 1.) the public and the institutional leaders must be made aware of these efforts in a coherent manner. 2.) MAGA (Republicans and all Americans) must unite to oppose their agenda.

Higgins’ expertise is in combating terrorism and information age unconventional warfare.  He was hired by General Flynn, the man Obama conspired with ClA Director John Brennan to frame with a bogus Logan Act investigation over a phone call to the Russian ambassador that Obama himself had approved.  It was a phone call Flynn knew was being listened to and recorded by the national security apparatus.  A word-for-word transcript of the call has recently been declassified and proves the charges against Flynn were fraudulent.

Higgins was fired by H.R. McMaster, a former Army lieutenant general who served as Trump’s National Security Adviser before Trump finally fired him in 2018.  After his firing, McMaster participated in the Democrats’ coup attempt via impeachment over the Ukraine quid pro quo hoax.

I’ve always admired Higgins because he has taken a strong stand against the radical left’s campaign to use political correctness to censor speech of political opponents.  He stood up to a full fake news media assault for that.

Here is the video of the assault on the White House in late May (for further info, see my post on how China played us with Covid-19):

At his New Hampshire rally this afternoon, the president announced he was looking into declaring the riots an “insurrection” under U.S. law.  The insurrection act allows the president to use troops when “any insurrection, domestic violence, unlawful combination, or conspiracy” prevents enforcement of state laws in a manner that deprives residents of that state of their federal constitutional rights.

So Trump said this serious thing, and yet he looked as happy and relaxed at the rally as I’ve ever seen him, as if he knows exactly what’s coming and is completely confident his enemies are toast.

Earlier today, the DOJ announced that the 9th Circuit Court of Appeals had blocked a federal district judge ruling that blocked federal law enforcement from stopping the rioters in Portland, Oregon.  In the announcement, the DOJ said the city government of Portland had “abetted the violence”.

Read here about the Ukranians and East German Antifa that Obama’s ClA Director John Brennan used to fill the Democrats’ seditionist riot groups in Seattle.  This is John Brennan’s insurgency and Antifa-BLM are this generation’s brownshirts, not only in the U.S. but around the world.