Seamless VIP Memberships for $5000 a Year 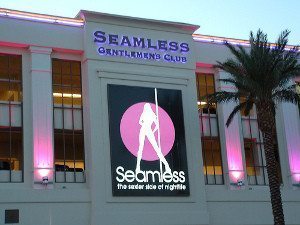 Seamless, a new Las Vegas topless club that held dancer auditions last week but is not yet actually open, has announced the club is selling VIP memberships for $5000 a year.

What does a $5000 membership get you?  Free admission for you and up to five guests for a year, one premium bottle of vodka or champagne per visit, and free club transport for up to a five-mile radius.  The club plans to be open Thursday through Sunday nights from 8 pm to 8 am.

Vegas Strip Club or Night Club?  Why, It’s Two Clubs in One!

It looks like Seamless also intends to revive their after-hours club, which I liked 10-11 years ago when the club was last open.  The way it worked back then was that every night at 4 am, the club would stop featuring strippers on the main stage and start playing dance music for after-hours nightclubbers.  A couple of go-go dancers in bikini outfits would dance at the corners of the center bar.  Some of the strip club tables would be cleared away to create a dance floor and strippers would put on their clubwear to dance with the guys who were there.

Guys would buy drinks for the dancers and some would take up the dancers on their invitations to retire to the VIP rooms for a topless show.  It was a scene where a guy could actually socialize with dancers in a nightclub setting before going into the VIP for an up-close-and-physical encounter.

This unusual and cool arrangement made Seamless halfway between a modern Vegas strip club and those old taxi-dancing clubs from the 1920s and ’30s, where guys went to dance with attractive ladies for a dime a dance.  It’s a strip club dating fantasy.  Now, instead of paying the girl a dime, you buy her a drink, boogie with her a while, then go undress her in the VIP.

At the original Seamless, a lot of guys seemed to find it fun to pick a girl out of a crowd in a nightclub setting before taking her to the VIP.  It’s a set-up that makes guys feel more like they’re on the hunt, rather than getting hustled.

What the Hell Is This Place???

I also used to enjoy watching the accidental tourists who somehow wandered into the club, perhaps brought by a sadistic cabbie.  It’s early Sunday morning.  Two married couples enter the club together.  Maybe the husbands are insurance agents, in town for a convention or something.  You can tell this is their big night out on the town, because they’re wearing their snazzy suits and their wives are dolled up, earrings and everything.  The four of them huddle together just inside the main room entrance for mutual support and protection, as black dudes walk past them with pierced eyelids.

They’re looking for a safe place to sit and have a cocktail before heading back to their rooms at Excalibur.  But there’s no place to sit down.  And many of the women in the club are walking around in their underwear — little lacy bra and panty sets with fuck-me platform heels.  And everyone is acting like that’s completely normal.  The insurance guys keep elbowing each other.  Look at her!  Look at her!  But their wives are gritting their teeth and steaming.  At the side of the room, in some upholstered chairs, a girl in nothing but a g-string is straddling a guy with her tits in his face.  What the hell is this place?

So, as crazy as it sounds, this new kind of strip club was a lot of fun, and Seamless would probably have succeeded if the economy hadn’t crashed so terribly. I’m glad to see the club reviving this unusual business model.

I doubt membership will be required for admission to Seamless.

Seamless is a plush club located a few blocks west of the Strip on Arville just north of Tropicana, across the street from the Orleans Hotel and Casino.  I’ll let you know when they open to the public.  In the meantime, check out my post on the best strip clubs in Las Vegas as of 2019.