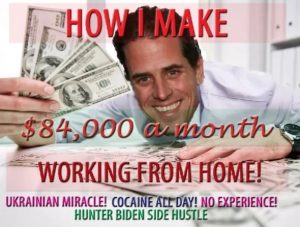 In my post on the Biden family’s protection racket, I discussed the report that the Senate Homeland Security and Treasury Committees released on Hunter Biden.

The report included thousands of pages of documents that show Hunter Biden got at least tens of millions of dollars (likely more) from foreign billionaire criminals in Russia and China and elsewhere in exchange for Joe Biden protecting said criminals from U.S. investigations, asset seizures and the like.

Now the NY Post is reporting on new info that has come out on the Biden family protection racket.  Specifically, a Hunter Biden laptop that has been turned over to the FBI contains tens of thousands of emails and texts in which Hunter negotiates and describes these illegal deals he negotiated for Joe Biden.

There are also thousands of incriminating photos and videos on the laptop, including at least one video of Hunter Biden smoking crack cocaine and reportedly another of him engaged in sex with a little girl.

One of the questions left open by the Senate committee report was the exact deal between Hunter and his father and the rest of the Biden family.  There were multi-million dollar transfers from Hunter to Joe Biden’s brother.  But what was Joe’s cut?

Today a text from Hunter’s laptop was released that provides the details of Joe’s deal with his son.  The video below is Rudy Giuliani reading the text.  It’s a text from Hunter to his daughter Naomi in which he describes exactly how the money is whacked up.

It turns out that Joe Biden gets half of all the money that goes to Hunter for Joe’s protection racket.  In addition, Hunter is required to pay expenses like college tuition for everyone else in the extended Biden family.

The reason the money had to go to Hunter rather than directly to Joe Biden was to keep Joe from having to report it.

The people who hooked Hunter Biden up with his $84k/month gig with Burisma were Blue Ribbon Strategies, which claims to be a “Democrat PR group”.  The company is run by former top Clinton staffers.  In reality, it appears that Blue Ribbon Strategies works out deals with foreign criminal oligarchs around the world and whatever Democrat politician is best placed to sell a criminal a favor.

Usually the Clintons have been the best placed, and the payments to them have been laundered through the Clinton Foundation.  But Biden got plenty of deals too.

After Blue Ribbon made the introductions between Hunter and Burisma, Burisma execs wrote to Biden asking him for “advice on how you could use your influence” on the company’s behalf.  Hunter replied that they really needed to get the money flowing to him immediately before he could respond to that.

After Hunter Biden began receiving his $84,000 a month in Burisma bux, he arranged a meeting between Burisma’s owner and his father Joe, who was Vice President at the time.  Burisma’s owner had been forced to flee Ukraine as a result of an investigation into his corruption.  After the meeting, Joe proceeded to get the guy investigating Burisma corruption fired in a quid pro quo for $1.8 billion in U.S. aid to Ukraine.  President Poroshenko of Ukraine then whacked up the $1.8 billion with Biden.  They laundered the payment through PrivatBank.

Joe Biden has denied having an “official” meeting with Burisma’s owner.  An official meeting would have to be recorded in government records.  But Politico reports and Daily Wire reports he did not deny having an “unofficial” meeting.  So don’t let the media gaslight you that Biden has disputed the NY Post story.

Hunter Biden’s attorney did not deny the allegations in the NY Post’s story either.  He said something about conspiracy theorists coming after the Bidens for years, but no denial.

And here is the first hit on Soros, the capo di tutti i capi of the Democrat crime family.  Why did Joe Biden meet with him right before the meeting with Burisma’s owner?  Amos Hochstein, the other guy Joe met with that day, got paid off with a big Hunteresque job at another Ukrainian natural gas company.  What did Soros get?

Oh, baby.  Just wait till you find out where Soros’ money really comes from.

Reportedly, Poroshenko and Biden actually stole much more than $1.8 billion from Ukraine.  According to Ukraine news sources, $40 billion in foreign aid was stolen, via payments to shell companies with bank accounts in the Caribbean.  The payments were supposed to be for military weapons and equipment, but none of it was ever delivered.

The FBI Got the Laptop the Day Before Pelosi Started Impeachment

The NY Post reports the incriminating emails, texts, videos and photos were found on Hunter Biden’s laptop after he dropped it off for repairs. The service guy repaired the computer, then called Hunter repeatedly to come pick it up and pay for the service.

But you know how crackheads are.  Hunter never paid the bill and never returned to pick up the computer, so it became the property of the repair guy.  When the repair guy read the emails and saw the photos, he made a copy of the hard drive and gave it to the FBI.

The day after the FBI received the material, Nancy Pelosi somehow came to the decision to start impeachment proceedings over the Democrats’ Ukraine hoax. The impeachment was obviously intended to block the investigation of Biden’s crimes in Ukraine, as well as the crimes of other Democrats.  It now appears Obama’s State Department was in on the corrupt deal.

In any case, corrupt Christopher Wray’s FBI sat on the information for 10 months.  Then the computer repair guy, sick of waiting for justice, made copies of the hard drive and sent them to every news organization in America.

He also sent copies to Rudy Giuliani and numerous GOP senators and God knows who else.  This is now what a citizen must do to get justice in this country.  The Senate Homeland Security committee has already launched an investigation of the material.  So we are going to be getting new revelations daily.

Facebook suppressed posts with links to the NY Post story.  Twitter at first interfered with clicks on the link by intercepting them with a warning label saying the link was unsafe, like a virus warning.  Then they blocked tweets that contained the links.  Then they began shutting down every major account that tweeted the link, including the accounts of the White House Press Secretary, James Woods, the Trump Campaign, Latinos for Trump, reporter Jack Posobiec, and the New York Post.

New emails released today from Hunter Biden’s laptop show he was getting $10 million a year from CEFC China Energy for “introductions alone”.  The deal was for a minimum of three years and $30 million.  Later, the former chair of CEFC, Ye Jianming, who had ties to the Chinese military and intelligence, promised a “much more lasting and much more lucrative” deal and set up a 50% equity deal for Hunter in a company that was owned by Ye.  Whatever the new deal was worth, it was more than $10 million a year. 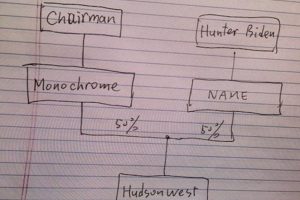 A photo on Hunter’s laptop dated Aug. 1, 2017, shows a handwritten flowchart of the ownership of “Hudson West” split 50/50 between two entities ultimately controlled by Hunter Biden and
someone identified as “Chairman.”

In my first post on the Biden family protection racket (link above), I pointed out that Ye Jianming also separately paid Hunter Biden $6 million, plus a large flawless diamond, to block a U.S. investigation into the activities of Ye’s associate Patrick Ho.  Ho himself paid Hunter another $1 million in September 2017.

Hunter failed to block the investigation because Trump got elected. So Ho wound up in U.S. prison at the end of 2017 for violations of the Foreign Corrupt Practices Act, money laundering and conspiracy.  It was all for a global money laundering and bribery scheme aimed at government officials in Africa.

Ye Jianming has disappeared and is supposedly now in prison in China for corruption.

It’s all everything we already knew was happening with corruption in DC, but a million times worse than our worst fears.  They sold us out in every way imaginable.  They sold our sensitive troop locations and plans during war.  They sold our weapons technology.  They sold the names of our ClA assets and got these people executed.  They sold the Chinese and Mexican drug cartels a pass to bring in fentanyl.

I told you the Democrat party was no longer a U.S. political party but an organized crime syndicate.  And gird your loins, Republicans.  We’re going to be finding out about scum in our party too.  (Hi Mitt!)

This is just the tip of the iceberg.  Giuliani is a street brawler like Trump and a brilliant prosecutor. He’s hitting the criminals with the lesser stuff first to get them on the record with lies before slamming them with the big stuff.  Secret Service records show Hunter alone made 411 trips to 29 countries in the first five years of the Obama administration.  They didn’t even try to hide it!

This is the underlying cause of the Democrats’ four year and still running coup attempt.  They’ve been trying to stay out of jail.