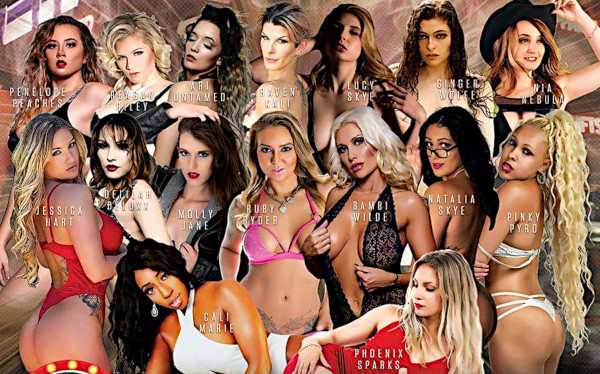 Larry Flynt’s Hustler Club in Las Vegas will be hosting the 2021 Miss Nude International competition this week, from Monday to Wednesday, August 9-11.

I got the announcement from Hustler in my email, with a photo of 16 performers, one of whom is Reagan Reilly (see pic above). Reagan tells me she’s not competing this year, but will be one of the judges. Don’t miss this show if you want to see some of the most beautiful women with the most dynamite bodies on the planet, one after another, teasing the living sh*t out of you.

The show is scheduled to start at 10 pm. Vegas strip club shows have a longstanding reputation for starting much later than their advertised times, but I would not advise being late for this one. Hustler has been advertising the Sexxy After Dark show as starting at 9 pm and that show always starts on time. So don’t be late, especially if you want to grab a seat on the rail.