This is Part Two of my interview with Brent Kenton Jordan, a VIP host/bouncer at Palomino Club (club review / club website). Part One is available here: “Interview with a Vegas Strip Club Bouncer”.

In this part of the interview, I asked Brent to tell me the best and worst things he’d seen in a strip club. 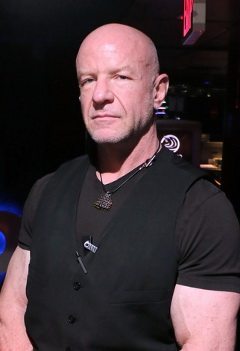 The worst thing?  This one’s in my book. I was working at another club in Vegas and we had vice cops coming in all the time. So I’m talking to these two cops and doing what a host is supposed to be doing—distracting them from their job while word gets around that there are vice cops in the building.

So all the girls are being very demure, sitting on laps with their hands between their legs, and there’s a lap dance going on in the VIP room but I have my back to it, talking with the cops who are facing me.

Then one of the cops looking over my shoulder said, “Oh my god, look at that.”

I turned around and this big burly guy’s got this tiny little girl, didn’t weigh a hundred pounds, and he’s pulling her hard, he’s ripping her apart trying to get her breasts in his mouth.

Oh shit. I’m sprinting over there thinking these cops are on my heels, they’re gonna take stick time on this guy, they’re gonna beat the hell out of this dude.

So I got my licks in first and I pulled the girl away from this guy and I started reeducating him about the proper way to act in a strip club.

But I had to stop the beating because right behind me I heard the cop go, “What the hell’s the matter with you? Why would you let a guy treat you like that?”

I turned around and the cop had the girl by the arm and he’s berating her for being molested by this huge dude.

I lost my mind. I went off on the cop and ended up spending a couple hours in the back of a police car that night because I shoved this police officer. I couldn’t believe that a police officer could witness an assault and then blame the girl for it.

Why? Because she’s a stripper.

The best thing I’ve seen is women who were in the business who came out the other side with a great education and a beautiful family, a loving husband and children, being a very productive part of society, and it’s a wonderful thing to see.

People think that once strippers get out of this business they go to the old stripper trailer park in the sky or something. But the majority of them find themselves. I ran into one at Circle K—I was getting my protein shake—one of the girls I worked with eighteen years ago. And now she was teaching school–elementary school kids–and loving it. She just loves kids so that’s what she’s doing. I know another girl who got her doctorate and she does counseling, couples counseling at a big clinic. She used to be Deanna, she was my buddy, but now she’s Doctor.

It’s especially wonderful to see the lost ones eventually come out the other side. It’s beautiful. It’s something you don’t get to see in regular society because most people are hand-walked through by their parents, then school, the military, then into their career. But this is different. This is a fight every second of the day, and when you see them come out the other side they’re so much stronger for it. It’s a beautiful thing. And in thirty-one years, I’ve seen that happen a lot.

When I was a kid, before I joined the army, I saw myself being a cop. I wanted to be that white knight. But I found a different outlet for my white knight complex—a little down and a little dirty, but I think it’s fulfilled what I needed in my life.

Would I do it again?  Yeah, I love it. I love the people I’ve known and I love what I get to do. I love it.

Brent Kenton Jordan is the author of the book Stripped: Twenty Years of Secrets from Inside the Strip Club, which should be required reading for any guy who goes to strip clubs.

If you want to get a view of the Vegas strip clubs from the inside, here’s someone who’s lived it for over 20 years, starting back in the era when the mob ran the clubs, and he knows how to tell a story.

You can download a digital copy of the 300+ page book free from Smashwords.

Interview with a Vegas Stripper