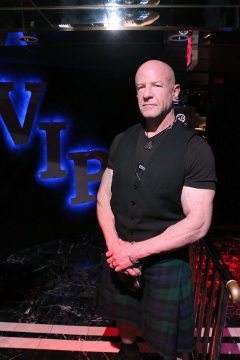 Brent Kenton Jordan has been a bouncer in strip clubs since 1984, most recently (since 2006) at Palomino Club (club review / club website) in Vegas. In 2004, he wrote a book about his experiences as a strip club bouncer titled Stripped: Twenty Years of Secrets from Inside the Strip Club. [See below for information on getting a free digital copy.]

I interviewed Brent at Palomino, sitting at the upstairs bar, on Wednesday, July 15, 2015.

How did you get your first job as a bouncer and did you have any kind of formal security training?

I came from a karate background. When I got out of the army in 1984, I opened a karate school in San Diego, but I wasn’t making any money, so I was looking for a job. I bounced at a regular bar for about six months, until I got fired. The next bar down the street was a strip club.

I walked in the front door and the manager happened to be at the door and he was firing someone that night. He hired me and I’ve been doing this ever since—31 years, eleven different clubs, and I’ve only been out of work three days in all that time.

Did you always work as a bouncer?

I started as a bouncer at Pacer’s in San Diego—though there’s no such thing as a bouncer anymore. We’re hosts now, VIP hosts. I went from bouncer to DJ to manager to DJ to bouncer … it depended on what the club needed at the time. If they needed a bouncer, I was a bouncer.

When did you come to Las Vegas?

I came here in 1991 and got a job at Cheetah’s which had just opened. That’s where I met Adam [Gentile—now owner/mgr of Palomino Club. See “Interview with a Vegas Strip Club Manager”]. When I was fired as a DJ at Cheetah’s, Adam was hired to replace me. I was rehired the next day as a bouncer. Adam and I mostly talked about Samurai movies–Akira Kurosawa. When he got Palomino in 2006, I made the offer if you ever need anything let me know, and he said I need something. So I started working for him the same day.

I love the job. Absolutely. Think about what I do for a living. I get paid by beautiful teenage women to watch them take their clothes off, and every once in a while I get to slap the living piss out of some guy who desperately needs it. It’s like the job description was thought up by a bunch of drunk bikers one day. I live in Viking Heaven. Valhalla.

Is there anything you dislike about the job?

I dislike the disrespect I see. This is supposed to be a gentlemen’s club. There are people who come in here and feel that because this is a strip club, these women aren’t real people. But these are 20-year-old women. You wouldn’t walk up to a young woman on the street and smack her on the butt. But here, a guy feels like here’s a dollar—that makes it okay. But it’s not okay. It doesn’t matter if she’s naked right in front of you and she’s working for dollar bills, she still deserves human courtesy and respect. That’s what hurts me in my soul about the job. If people would just stop and think about it for a second, they’d be ashamed of themselves. But they don’t stop and think.

How often do you have to deal with a difficult customer?

Every night. It’s alcohol and naked girls. If you’ve got a hundred customers and 97% are doing what they’re supposed to be doing, you’ve still got three customers being jerks that you’ve got to throw out that night. That’s not bad. The most people I ever had confrontations with in one night was eleven. I remember the two days when I didn’t have to throw anybody out.

This club is quite a bit more mellow that the other clubs I’ve worked at. Most of the time, if you just talk to people in here, they self-correct. The majority of the customers here are polite enough, they maintain enough courtesy to not get into trouble.

Is it easy for a guy to get a job in a strip club?

Strip clubs are always hiring, but most guys can’t do this job. They think this is great, then they start following their dick everywhere. You’d think any moron could do it, but not any moron can. Special morons do this job.

What advice would you give a guy who wanted to be a bouncer?

You want to bounce? Be smart. Outsmarting drunks shouldn’t be that hard. The guy’s intoxicated, not at his full capacity, and you’ve got to get him out the door. Sure you could pick him up and carry him out the door—like we did in the eighties and nineties—and he could sue you. Now I use verbal judo. I just have to get him to comply with what I’m asking him to do.

If a guy wants to be a bouncer and he’s slight of built, but he’s good verbally and he’s heads-up and he can pay attention to what’s going on, that’s much more important.

Here’s a secret for any potential bouncers: whisper. If you’re in a busy club and someone starts whispering to you, you start concentrating on trying to hear. All your focus is on what’s being said, rather than on your anger issue.

Once they forget what they’re angry about because they’re trying to hear what I have to say, they’re one step closer to following me. I’ll start moving and keep moving till we’re out the door and once we’re outside, there’s nothing to fight about anymore. You can stand there and call me names, but you’re outside where I wanted you.

Are there any classes or instruction manuals for bouncers?

There are but they’re counterproductive. You take these classes and it’s like here’s how to wrist-lock and here’s how to handcuff someone, But while you’re doing that, the smart guy already walked the drunk out the front door. C’mere, man, I gotta tell you something, I gotta talk to you, your friend wants you up at the front, Who? I don’t know he didn’t tell me his name, c’mon—

The classes and books always focus on the physical. If you’re good, you shouldn’t often have to lay hands on people. The guys who do that a lot are young, overly aggressive—like I was when I was younger. But it’s not necessary. It’s really not.

Do you ever have physical confrontations anymore?

When it’s absolutely necessary—meaning the customer has his hands on a woman, or he has his hands on me. And I don’t worry about anyone putting their hands on me. You’re not going to beat me in a fight. I do this for a living. But if you put your hands on a 19-year-old girl in an aggressive manner, you’re gonna take a beating. That’s about the only time I do that anymore and it’s out of a sense of social justice. It’s very rare in this club. It’s very rare in Palomino that anyone has to be touched.

Do dancers talk to you about their jobs?

Part of my job is to help a girl vent on her customers. She’s twenty, she doesn’t have lot of life experience. Somebody old enough to be her father says, “You know, I think you’d look a lot better if you had a tit job.” Who is this guy anyway? Why does he feel comfortable critiquing this body that’s way nicer than any he’d have a chance to be with in the real world in his entire life?

So just about every night you’ll listen to some girl go off on a guy who was rude or pretentious. You have to get her to laugh about it. He wouldn’t have the guts to talk to her in real life. In Walmart, he wouldn’t have the nerve to walk up to her and ask her what time it is. But he can come in here and tell her her butt’s too big and her tits are too small.

What do you do on your time off?

I eat, sleep, train, and write.

Brent Kenton Jordan is the author of:  Stripped: Twenty Years of Secrets from Inside the Strip Club. The book is now out of print, but you can obtain a free digital copy of the ebook from Smashwords. This is a really cool inside look at Vegas strip clubs from the mob era through the early 2000s.

2 Responses to “Interview with a Vegas Strip Club Bouncer”