Although I’ve always loved watching women take their clothes off on stage, I never thought of myself as a voyeur.  I was just a regular guy who liked women.

Then, about eight years ago, I checked out the Diamond Cabaret. The door to the dancers’ dressing room at that time was located in a corner next to the ticket taker’s office. Because of all the mirrored walls in the club, every time a dancer entered or exited the dressing room, you got a shot of the whole inside of the room.

In fact, it really jumped out at you because the club itself was so dark and the dressing room was so bright. You couldn’t help but find your eyes being drawn to the dazzlingly-lit scene that appeared whenever the door swung open. Gorgeous girls in t-shirts and G-strings were smoking cigarettes and brushing their hair and lounging around and whatnot.

I found myself waiting for that door to open just so I could peer into that secret room again where the dancers were relaxing in dishabille. It struck me that I kept looking in because I was hoping to see a girl undressed. I’d get to see every one of these girls buck naked on stage at arms reach, so where was the allure? Go figure.

Then, the Diamond Cabaret remodeled the club interior so that the dressing room was no longer visible from anywhere in the showroom. I could not get over my disappointment.  I lost interest in the place and now I only go there when it’s time to update my TVO review.

Basically, strip clubs that stream their stage shows online set up their web cams so that their main stage show can be viewed over the Internet by anyone free of charge. The camera is on at all hours the club is in operation. 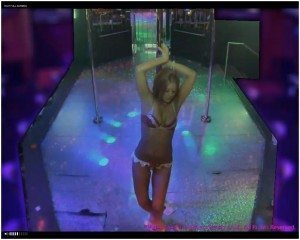 The Dancers at Little Darlings Las Vegas Get Fully Nude

The cameras I’ve seen have been fixed (you have no pan/tilt/zoom options) and the live streaming video is not high-res, though it’s pretty decent for a full-screen live show that you can watch from home or on your phone any time at no charge.

Here are a few screen captures that show the basic quality. Because these are screen captures, the dancers in motion appear a bit blurrier than when watching them in action, but you can see the resolution and focus on the stationary stage and poles, etc. (Click the pics for full size.) 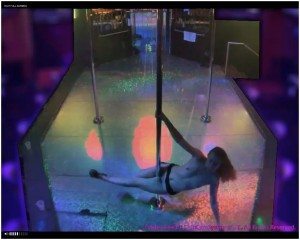 The voice of the DJ and the music also streams so that you can get a pretty good audio/video depiction of the stage show all night long. All of the dancers get naked in a nude club or topless in a topless club, and there’s no downtime for the camera, though any onstage bachelor party or other events where audience volunteers are onstage will be blocked out.
. 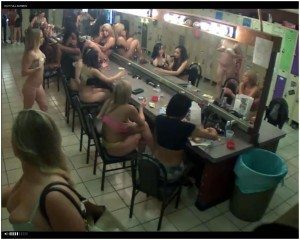 On the strip club dressing room cams I’ve watched, a typical evening meant you could watch the dancers enter in their street clothes, fix their hair, eat their lunches, and sit around smoking and texting.  After that, they would tend to spend some more time fixing their hair, fixing each other’s hair, putting on their make-up, taking off their street clothes, rubbing lotion on their bodies, getting into their stage outfits, etc. If you turned the sound on you’d hear the stage music and the DJ’s voice (not the sounds of the dancers talking in the dressing room). 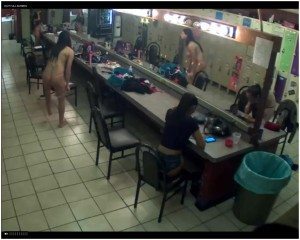 What I noticed was that every time a new dancer entered the room in her street clothes, I started anticipating her undressing. Sometimes she’d sit there for an hour, eating her lunch and talking to the other girls. There were periods of watching the dressing room cams that were like watching paint dry. But I was afraid to click off the dressing room cam to watch the stage show, because I might miss seeing the new girl undress.

The fact that the girl on stage was already naked and spreading her legs under a spotlight didn’t matter.  For some reason it seemed sexier to watch a girl undressing in a dressing room when she was just being herself and not performing.

Sometimes a dancer would come in looking hard, looking tough. But after an hour in front of the mirror doing her hair and her eyes and her lips and then her hair some more, plus some incomprehensible beauty routines that no man would ever understand, she would stand up looking like Uma Thurman. 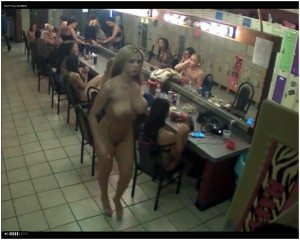 Then she would put on her dancing outfit. This was another major operation that was likely to be fascinating to the average guy. I watched a dancer spend five minutes adjusting her panties while looking at herself in the mirror, pulling the panties up to show more cheek, trying to decide what level they should ride on her hips, asking other dancers’ opinions on the matter.

Occasionally my wife would stop to watch the dressing room girls with me. She would make comments on their fashion choices. “Oh, what a cute little pink and white bra and panties set!”

After a while I figured out that whenever a dancer put on her platform heels, that was the signal that she was about to exit the dressing room to either work the crowd or dance on stage. (They do not wear those god-awful shoes when they’re not performing.)

If she was heading for the stage, I could switch over to the and watch her strip out of the outfit I’d just watched her put on. It’s interesting watching a woman whom you’ve come to know backstage switch into her professional performer persona.

Go Private Online with a Dancer 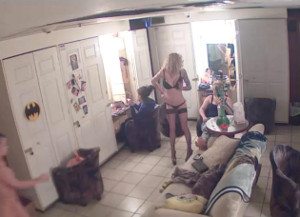 In many of the clubs, there’s another cam in a second dressing room area where you have the opportunity to interact with a dancer personally. If a dancer is “online” she’ll be sitting at one end of a dressing room with a close-up camera on her as well as a live mic. If your computer has a cam and mic, she can see you and you can converse with her. If you don’t have a mic, you can text-chat with her.

There may be multiple guys besides you watching her and chatting (with each other and her). Here’s a screenshot of the lovely Zoey (fixing her hair, of course)  in an online chat. 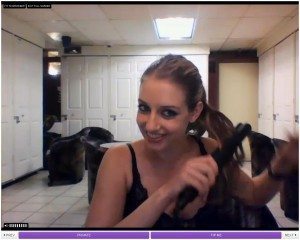 If you want to “go private” with the dancer, you can do this by purchasing credits. A typical charge is 25 credits for $25 or 50 credits for $50, etc.–basically $1 per credit. You can usually purchase credits via credit card, debit card, or Bitcoin.

For a completely private experience, the going rate in late 2014 was $4 per minute. But there is usually a “Tip Me” button at the bottom of the screen. You can also tip dancers in the public or private online rooms, as well as when they are dancing on stage.

There is typically a “Make It Rain” button that shows when you’re watching the stage dancers if you really want to tip big. Some clubs only offer rain showers in increments of $50 or $100. You deposit your credits and dollar bills shoot out of a gizmo above the back of the stage, to the sound of thunder. The dollars that shoot out aren’t real, but the dancer does get a high percentage of the tip.  Part of the tip also goes to pay the people who set up and maintain the system, and the club gets a cut.

Many of the club’s dancers will also have photos available that you can purchase or videos you can rent, utilizing the credits you buy. Most videos seem to be clips of stage shows or special events at the club, ranging from 2 to 10 minutes in length, and priced from $2 to $15.

Live Strip Clubs as of this update still livestreams a number of clubs’ stage shows and dressing rooms nationwide.

You may also be interested in our photo gallery:  Into Palomino Club’s Dressing Room.