[Nicholas Colon is a brilliant guy I first encountered at the Blackjack Balls, an annual Vegas get-together for top professional gamblers. He’s a writer and poker player and, like many of us who live here, is wondering WTF our city is turning into.  — Snyder] 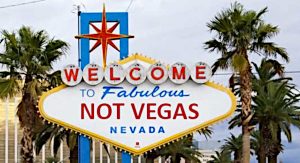 Approximately one year ago Las Vegas, like most of the world, shut down completely.  Restaurants and schools, along with every non-essential business, was told you can’t open because doing so would put the public at risk of the COVID-19 virus.  This begs the question what is essential? Answer: Whatever we (the government) say it is.

Some think this was the right thing to do, while others are less sure.  What we do know is that the Las Vegas economy was one of those most negatively impacted by the decision.  For the first time since November 1963 (the assassination of President Kennedy) Las Vegas closed its doors. But this time it was for an indefinite period of time.  Casinos, bars, restaurants and of course all of our favorite gentleman’s clubs were a part of this unprecedented shut down.

Now, here we are 12 months later and Las Vegas is slowly — perhaps too slowly — opening up.  So what does this mean? For the past nine months much of Las Vegas was operating at a 25% capacity, including all our favorite strip clubs.  It was only recently that this number was moved to 35%.

Opening up in this context doesn’t imply back to normal.  We are very far from where we were in the pre COVID-19 era.  Previously the topless clubs in Las Vegas were open all day every day.  Now clubs open at various times and some only on certain days.  The clubs now cater to the night and weekend crowds.  Some clubs open at 6 pm while others open at 8 pm.  Certain clubs are only open Thursday through Sunday.  A big contributor to the reduced operating hours is the lack of the mid-week convention business, which used to account for almost half of total Vegas (and Vegas strip club) tourist revenue.

Further hindering the traditional gentleman club experience in Vegas right now is the conversion of strip clubs to bikini clubs.  Two of Las Vegas’ most popular clubs — the Palomino Club and its nearby sister club Chicas Bonitas —have all their dancers dressed in bikinis on stage now instead of nude or topless respectively.  Mandated social distancing restrictions of 6 feet obviously hamper lap dance quality, again reducing the full gentleman’s club experience.

These restrictions are taken seriously by the club owners because they are strictly enforced by the authorities.  Over the 2021 Superbowl weekend three of the top strip clubs in Las Vegas were shut down for not following social distancing requirements.  Larry Flynt’s Hustler Club, Minks Las Vegas and Spearmint Rhino were all issued emergency suspensions for topless dancing and lack of social distancing. The suspensions were rescinded after 36 hours but it was enough to let all the strip clubs in town know that they must follow the distancing mandate.

The COVID -19 restrictions have also put a severe dent in the Las Vegas Strip casino business.  In the last year each of the major conglomerates has lost hundreds of millions of dollars in revenue.  No convention business, coupled with the lack of travel by vacationers, has caused the bottom line of the Las Vegas gaming companies to be tragically reduced.  To compensate for the loss in revenue the casinos have implemented some sneaky tactics.

The first is that all of Caesars’ properties have converted many of their blackjack table games to a 6:5 payout when the player gets a blackjack, instead of a 3:2 payout.  This may not seem to be that big of a change but it pushes the casino advantage to almost 2% instead of a meager 0.5%.

Another example of the casinos extending their profits over the unsuspecting player is at the roulette wheel.  The Venetian, Palazzo and the Tropicana have all switched to a triple zero roulette wheel.  This increases the casinos’ edge from over 5.3% to over 7.5%.  These are two of the most visible changes that casinos have made to what are certain to be many.  To get an understanding of how casinos’ games work and what to look for when evaluating games, the 888 casino blog offers great insight.

The “global pandemic” has brought a lot of changes in gaming.  A surge in the online casino industry has occurred.  Online poker in particular has seen a boost because many of the poker rooms in Las Vegas are either temporarily closed or have been permanently shut down.  The Mirage poker room, once considered the jewel of Las Vegas poker rooms, has now been completely removed from the Mirage gaming floor.  The Harrah’s poker room has been taken out as well.  Other poker rooms, including Bally’s, are only open on the weekends.

The games are not the only things that have changed in the Las Vegas casinos.  The buffets have long been a draw for Las Vegas casinos.  High quality food in an all-you-can-eat layout gave the paying customer a sense of value.  Now, all the casinos but one have eliminated their all-you-can-eat buffets. The lone buffet that remains is at the South Point Casino, and even this buffet is not self-serve. Instead, you are served by staff; consequently, the prices have increased.  Not by much, but it is enough to notice.

And the governor of Nevada has announced he has no intention of lifting his mask mandate in the state in the foreseeable future.

Las Vegas is open but it is a mere shadow of what it once was.  I hope we’re getting closer to Las Vegas reclaiming the title of the entertainment capital of the world, but it seems to be a ways away at this point, and things will not really start to get back to pre-COVID levels until the conventions return to Las Vegas.

If you find yourself planning a trip to Las Vegas, be sure to double check what’s going on at the places you intend to visit while here.  What you remember being there may not be what is currently there.

12 Responses to “Is Las Vegas Returning to Normal?”