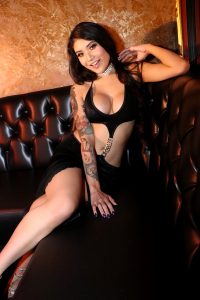 Brenna Sparks is a Las Vegas Escort Available through Slixa

Las Vegas legal brothels are still closed for ScaryVirus, but Las Vegas escorts are back in operation, maybe not in full numbers, but in sufficient numbers that you won’t have trouble finding a girl.

However, with the Vegas Strip hotels still at low occupancy levels, TVO readers are reporting problems getting their Vegas escorts up to their rooms.  Basically, with drunken fights and pickpockets and robberies down, hotel security has nothing to do but hunt for girls heading upstairs to possibly have sex with men to whom they are not, in the hotel’s eyes, sufficiently attached.

The worst problem seems to be at TI, where security is stopping escorts at the elevators day and night.  Even nooners can’t get through!  I’ve gotten three complaints in a week from people who stayed at TI.  That’s highly unusual.

The way it usually works is, you call an escort or service (or make arrangements with one in advance), they call you back in your room before your appointment, and then the girl shows up at your door.  If you like the way your escort looks, you pay her base rate for showing up (typically a couple hundred dollars, though Bat Plague may have changed that) and she comes in to start negotiations for whatever you really want.

But to get an escort up an elevator at TI at the moment, you are going to have to meet her downstairs, either in the casino or on the Strip.  Fortunately, security still isn’t checking for marriage licenses for women who are accompanied by men with a room key!