When I was playing blackjack at a high level, I was offered escorts as comps by the casinos at which I was playing.  It’s a frequent comp for high rollers, like free luxury suites and free meals.  This has been going on for decades and I doubt it will ever stop.

Now I have a place I can recommend for finding that companionship.

If you’re looking for a high-end Las Vegas escort (or an escort anywhere), the place I recommend to find one is Slixa.com.

Slixa is an advertising platform for independent escorts, not an escort service. That means none of the escorts advertising there are working for Slixa; they are all self-employed.  Slixa isn’t even an agent.

But unlike Backpage or Craigslist or sites like Eros, Slixa has high standards of whom it will accept as an 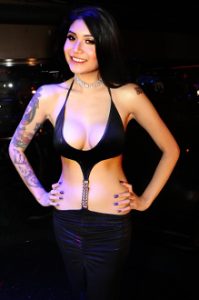 Las Vegas Escort Brenna Sparks Can Be Found at Slixa.com

advertiser. When I did a Google search for negative comments on Slixa, mostly I found complaints by escorts that had quit advertising there because they felt Slixa’s rates were too high, or that had been banned from the site for violating Slixa’s rules, including a strict rule that all photos must depict the actual escort who is advertising.

One of the big problems at sites like Eros, and why I’ve hesitated to recommend them, is that they accept ads from escort services, who will post a photo of a model who doesn’t actually work for the service.  Or even if the girl does work for the service, she is not the girl who will actually show up if you make a reservation.  Or even if it is the same girl, the photograph is 10 years old and shows the girl 40 pounds lighter.

On Slixa, you’ll see a “Report Profile” link on every escort profile page, with a request to report any girl “who has dramatically different verified and not-verified photos” or other issues.  Plus Slixa, in its terms and conditions for advertisers, makes it clear it will report trafficking or child exploitation to law enforcement.  The complaints of escorts who have been banned from the site prove Slixa acts on these reports.  And Slixa does a good job of weeding out girls who can’t compete by charging high rates.

All of the escorts I viewed on Slixa had photo galleries, not just a single small pic. Many have lengthy descriptions of themselves and what they like. Some list their hourly, daily and travel rates. Some have links to their personal websites. Some describe the methods they use to screen clients. In all cases, they provide methods of contacting them directly, not through Slixa.

Brenna is not only beautiful, she is smart, fun and sheer class.  It says a lot about Slixa that they can attract and keep a girl like Brenna.

The Nevada Law Regarding Escorts

With an escort, you are simply paying for companionship or modeling or to watch her do a striptease.  You can pay her for a massage, a conversation, a dinner date. Even a week in Europe.  But you are never paying for sex. If you have sex with an escort it’s always because you got along so well on your date that the sex just naturally occurred for free by mutual consent.  One way guys ensure things go well is by being generous.

Up until last year, finding escorts in Las Vegas or anywhere in the country was easy. Backpage was probably the biggest online marketplace for escort services in the world, but even Craigslist had thousands of escort listings in every major city in their adult personals section. Both of those sources and many others are now gone as a result of the passage of the bipartisan FOSTA/SESTA bill in April 2018.

Here’s what happened:  Backpage, which started out as a classified advertising page for the Village Voice but eventually became an independent online advertising venue, was harassed for years by various federal and state law enforcement agencies for enabling prostitution. And for years, Backpage successfully fought the charges based on the Communications Decency Act, which makes online services immune from civil liability for the actions of their users. The Communications Decency Act was passed in the mid-90s as protection for free speech.  It basically absolves online blogs, chat rooms, message boards, etc., that are open to the public, from any legal responsibility for whatever anyone posts.

Ultimately, Backpage was convicted because its offices were raided and the feds found evidence that the company had been editing ads.  The company had deleted any copy that openly offered prostitution or trafficking of children, but still accepted the ads despite knowing they were promoting prostitution and traffickers. This refuted their argument that they weren’t responsible for what others were posting on their site. Backpage had a hand in the content they published and they were purposely disguising the illicit nature of many advertisers.

The FOSTA/SESTA bill passed almost immediately afterwards.  It amended the Communications Decency Act by removing the protections for websites that offer public forums. Websites are now responsible for anyone using their forums for illicit sexual services. Even Craigslist eliminated its adult personals section.

Although both FOSTA and SESTA refer to “sex trafficking” in their titles, neither makes any distinction between true victims of sex traffickers and independent adult women who are voluntarily offering sexual services.

The Effects of FOSTA/SESTA on Las Vegas Escorts

Legitimate escorts had used online advertising services like Backpage and Craigslist for decades to screen clients. They could communicate anonymously with potential customers via email or message boards to ascertain that whoever was contacting them was not only not a cop, but also seemed to present no physical danger. They could request customers’ IDs, work references, social media pages, or even have phone conversations or Skype talks to assure themselves prior to any live hookup that they wouldn’t be meeting some psychopath or vice cop.

FOSTA/SESTA has now sent many sex workers back into the streets, bars, and nightclubs, where they take chances on meeting guys with no prior screening. A lower-end sex worker, who before FOSTA/SESTA had been able to work independently through the classifieds, may now find that the only way to survive is by getting her “protection” from the pimp who owns the streets, bars, and motels where she’s attempting to ply her trade.

That’s another reason I recommend Slixa.  It gives escorts the opportunity to protect themselves and remain truly independent, and it protects you from a dark world none of us want to support.

Be sure to check out our most important tip for getting a great experience with a Vegas brothel or escort.

4 Responses to “Las Vegas Escorts: At Last A Site I Can Recommend: Slixa.com”