A Cool Place to Smoke Weed Legally in Vegas 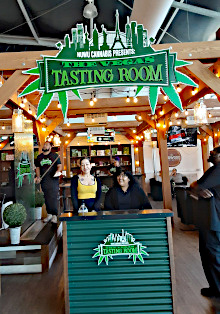 The NuWu Cannabis Marketplace, a legal marijuana dispensary run by the Paiute tribe since 2017, has just opened Las Vegas’ first legal weed smoking lounge. Yes, you can finally fire up a fatty in classy, comfortable surroundings without worrying about hotel security summoning the cops to arrest you.

The NuWu Cannabis Marketplace and weed lounge are open to the public, whether you’re a local or from out of town. All you have to do to enter and be a customer is show ID at the door proving you’re 21.

The first thing you notice when you enter the NuWu Marketplace is the aroma of weed, something you never smell in any of Las Vegas’ other weed stores. I never felt comfortable in those places, which all look like a high-end jewelry store.

The NuWu Tasting Room and lounge is located at the far end of the store and seats a few dozen happy and slightly dazed-looking customers in comfortable chairs and big comfy sofas. The room has a warm feeling from the polished wood floors.  There’s a big HD TV that was screening a baseball game when I visited.  The staff is as friendly as can be.  The whole scene had the feel of an episode of “Friends.” 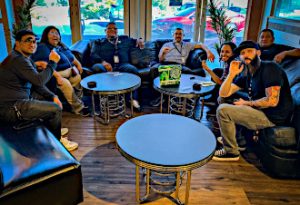 Relaxing in the Tasting Room

Nevada legalized recreational marijuana use for adults in 2017. Immediately, dozens of weed shops opened all over Las Vegas, but there was a problem. People were not permitted to use marijuana on the premises of the weed stores, nor were they allowed to use the herb on the streets, or in any of the casinos, restaurants, bars or strip clubs, in cabs or Ubers, or anywhere else tourists might actually have access to.

Nor could you travel in a plane with your weed, and if you drove with your weed into a state where weed wasn’t legal, you could be arrested for that too.  The only places where weed could be used legally in Vegas were in private residences. So, unless you knew someone who lived here, you were S.O.L. If you fired up a doobie out on the Strip, you were risking a $600 fine.

Then the state of Nevada passed a resolution to allow public weed lounges, but the weed shops are prohibited from opening these venues until 2021! 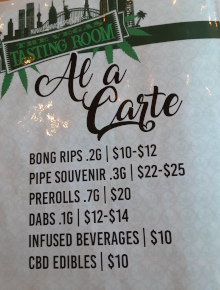 On October 5, 2019 however, Nevada’s resourceful Paiute Indians decided to take advantage of the fact that their properties are not governed by Nevada state law. They already had a weed shop operating in downtown Las Vegas, so in their NuWu Cannabis Marketplace, they opened their Vegas Tasting Room.  It’s already a huge hit.

If you look at their a la carte menu, note that it doesn’t specify the types of weed available, only the prices of the various ways of consuming. In fact, you have a huge selection of weed varieties in both the store and tasting lounge, including indicas, sativas and hybrids, all available as bong hits, filled pipes, prerolled joints, dabs, infused beverages and edibles.  You can get THC-heavy weed, straight CBD, or hybrids that give you both.  The store portion of NuWu Marketplace is huge, like the Costco of marijuana.

And because the NuWu store and lounge are on Paiute property, you pay no outlandish Nevada marijuana taxes! 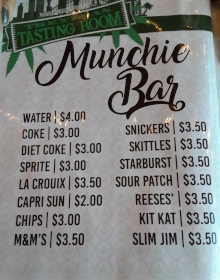 The NuWu Cannabis Marketplace is open 24/7, as is their 24-hour drive-thru. (Yes, you can purchase any of their products 24 hours a day without even leaving your vehicle.)

The Tasting Room is open from noon to 8 pm, Sunday through Thursday, and noon to midnight, Friday and Saturday.

The store and lounge have a huge, well-lit parking lot, which makes NuWu particularly easy to visit.

This is a really cool spot to get loaded legally in Vegas, without having to purchase any quantity you don’t want to carry around with you. Plus, the munchies menu has all of your favorite snacks for when the inevitable urge arises.

I like this place. It’s located on Main Street, just a block north of Washington.  That’s 0.7 miles north of Main Street Station Casino downtown, or about a two-minute drive.  You can call them at 702-844-2707.