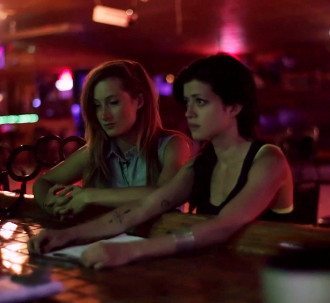 So, these two girls from Brooklyn, Natalia Leite and Alexandra Roxo, decide to make a series of documentaries in which they “try on” different women’s jobs. Naturally, they decided for their first film to try dancing in a strip club.

Did they go to one of the swank NYC clubs where they’d be entertaining lawyers and Wall St. execs? No. They decided to dance at Club 203 in Moriarty, New Mexico, essentially a truck stop on the highway in the middle of nowhere. The half-hour documentary can now be viewed on the Vice website (link below).

They stop at a beauty shop in town and as they’re getting their hair done, they tell the beauticians and other customers in the shop (all of whom are middle aged women) that they’re from New York and they’re going to try dancing at Club 203 for a week and they’ve never done anything like this before. One of the hairdressers says she’s worried for them. A customer says, “If you were my daughter I’d beat your ass.”

They talk with the Club 203 bartender/proprietor about working there. He tells them that most of the customers are truck drivers with lonely lives. He says, “Conversation goes a long way, but you’ll find quite a few that are interested in a little more attention.”

As darkness falls and the lights go on at Club 203, one of the club’s regular dancers gets on the CB and says: “Coming at you live from club two zero three. Okay boys, you know the routine. Look for those green flashing lights and you’ll find the party.”  Immediately after that, we see Natalie and Alexandra (now Dakota and Georgia) realize they don’t know a thing about the world and the loneliness of men.

The first night, the girls make $49 in stage tips.  Out of that, they have to pay their stage fees and tip-outs, leaving them very little to show for the night.  They’re shocked that they profited so little for so many hours of hard work. The reason they made so little money is that they were afraid to sell lap dances.

They go and talk to one of the experienced dancers the next day at her home. They sit outside in the sunshine talking.

The dancer, who’s pretty and in her early forties, says she has compassion for the younger dancers because they haven’t learned “to appreciate and love who they are” and Club 203 “isn’t exactly an environment that encourages that philosophy.”

She talks about many of the men having “fragile egos” and “trying to work out their own insecurities.” She says she enjoys working at Club 203. She feels many of the men who come in have never had an intimate experience with a woman and that “maybe somehow I help them be less shy.”

They go shoe shopping with another dancer, Mocha. Alexandra (Georgia) tells her that what makes the job hardest for her is never knowing which customer is going to try and reach his hand into her underwear.

Mocha says, “That’s why you slap their ass when they try to and you make ’em pay you some extra goddamn money.” She tells Alexandra she’s slapped customers’ faces plenty of times.

After Alexandra finally works up the nerve to sell a lap dance, she winds up in tears because the customer tried to lick her nipple.

We meet customers who are rude and crude, as well as some who seem like nice stable guys who just happen to be truck drivers.

We meet one customer who lost his eye in a solo game of Russian roulette.  Another one tells them they should be carrying mace because “some of these guys are fucking lunatics.” He shows them his pistol, which he calls his “pocket protection.”

But by the end of the film, the girls have developed compassion for the customers.

An interview with Alexandra and Natalie was published on the Vice website in December. From the interview:

“Dancing isn’t just about taking your top off; it’s about this role as a whole, of being a therapist, a friend, a listener. I have so much respect for these women now. The dancing is so secondary, and when you see the dancing it’s not that different from being a cheerleader for the Dallas Cowboys, or being any sort of female performer. There’s so much social stigma attached to it, but at the end of the day it isn’t that different.”

I liked this film a lot. In my opinion, strippers aren’t properly recognized as normal women, trying to survive.  And they aren’t credited for the difficulty of their jobs and their contribution to society, which is up there with therapists, doctors and nurses.  This film goes a long way towards erasing some of the stigma.

Life as a Truck-Stop Stripper is the first of Leite and Roxo’s “Every Woman” series on Vice. It’s a short film, about 27 minutes.