Note: Little Darlings’ regular monthly Pretty/Ugly Beaver Contest is on break while the club revises its special events schedule. I’ll report on the new schedule as soon as it’s available.

Little Darlings’ (club review) “Pretty/Ugly Beaver Contest”—a regular monthly event—is exactly what it sounds like. The contest is open to any females who are not working at Little Darlings. Each contestant gets one minute on stage to spread her legs and display herself to the volunteer judges, who are picked from the audience prior to the contest. Contestants are vying for one of two cash prizes for the prettiest and ugliest pussies among the contenders.

The contest is open to amateurs, meaning the contestants do not need a sheriff’s card in order to appear on stage. A few of the contestants did appear to be working pros, as they had their floor work down to an art form.  Other contestants may have been auditioning for a job at Little Darlings. Still others, however, were clearly not professional dancers and were unlikely to ever be.

In last night’s event, there were fourteen contestants, ranging in age from 18 to maybe 40, from skinny to hefty, from shaved clean to bushy, white, African-American, Asian, and Hispanic. Throughout the contest, all fourteen stood naked in a line across the back of the stage, creating a stunning and apropos background for the event.

Each of the judges received a scorecard that listed the contestants’ names in order of appearance, with space for notes.  There were seven judges, three of them female.  There was no interview, talent contest, or evening gown competition. Through the cheering and applause I could hear the dj’s voice, making corny pussy jokes.

After all fourteen contestants had gone through their leg-spread routines, two were called back for a second look, as the judges were divided on the prettiest pussy. (Apparently, the ugliest had no serious competition.  This made little sense to me, as I think most guys would be hard-pressed to see any pussy as ugly. It may have been the three female judges that threw a monkey wrench into the works.)

Finally, each judge submitted his or her scorecard with two and only two names circled—that judge’s choices for prettiest and ugliest pussy.

I should mention that Little Darlings is the most female-friendly strip club in Vegas and on any given night will have more females in the audience than any other strip club in town, all of whom come to party. I’d estimate about a third of the audience for this event was female. 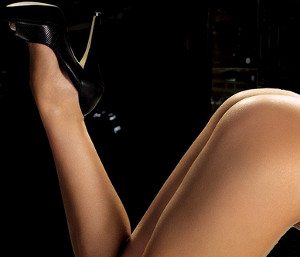 As the judges’ picks were being tallied up, I couldn’t help but wonder if we were about to see some poor girl go running off the stage in tears. How would it feel to win an ugliest pussy contest, especially if you thought you were in the running for the prettiest pussy? She might require years of therapy.

When the DJ announced the winners’ names, however, both girls seemed equally thrilled to be selected. Both were smiling broadly and raising their arms in victory as they were called back to stage front together to give the audience one last double beaver shot. The crowd cheered wildly.

Having seen only one pretty/ugly beaver contest in my life, it’s premature for me to draw conclusions about what constitutes a pretty vs. an ugly pussy to the average judge in a competition of this type. But I can tell you that the winner of the prettiest trophy was not the best dancer, nor did she have the biggest tits.

I will tell you this: when the girl who won the prettiest beaver award first spread her legs, my immediate thought was: We have a winner.

I must commend the judges on their diligent work.

The Little Darlings Pretty/Ugly Beaver Contest is held on the first Tuesday night of every month.  The contest starts at about 1:00 am, but get there by midnight if you want a good seat. Add it to your bucket list.

For more upcoming special events, see the Little Darlings web site. For free admission to the club, show the coupon on the our home page (located right below the top blog post) at the door.