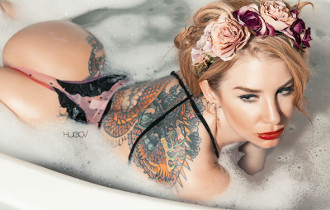 Share a Jacuzzi with Natasha Mink at Love Ranch Vegas

[Note:  Love Ranch Vegas closed in late 2018 after the death of its owner, Dennis Hof.  The brothel was sold in April of 2022 and is PERMANTLY CLOSED)

Odom was rushed to a hospital emergency room not because of the sex bender (for which he still owed the brothel $75,000), but because of an overdose of some drugs he had been secretly using during his brothel stay.

Had this scandal occurred at any other brothel in Nevada, there would likely have been an attempt by the brothel owner to downplay the incident, and especially to keep the name of the brothel out of the media as much as possible.  Instead, Love Ranch Vegas owner Dennis Hof, author of The Art of the Pimp and star of HBO’s Cathouse series, used it to let the general public know that there was a brothel near Vegas that catered to millionaires.

But don’t be discouraged if you’re not a millionaire.  Love Ranch Vegas is an easy-going place.  It offers a millionaire experience even for guys going for more normal services.

The Most Luxurious Brothel Near Las Vegas 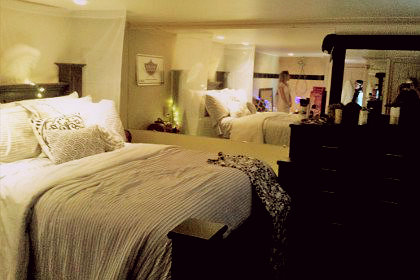 Unlike the small, bare bones, motel-style rooms of most other Vegas-area brothels, all of the girls’ rooms at Love Ranch Vegas are large and well-appointed, with beautiful hardwood floors.  At most other Nevada brothels there’s an extra fee for this caliber of room, but not here.

Ryder’s room (see photo) is typical of the rooms here–large, comfortable, and it even has a tub and shower. (Ryder was one of the girls who was with Lamar Odom on his famous visit here. You may recall she disappeared for a while, but now she’s back.)

There are also more upscale accommodations, because Love Ranch Vegas really does cater to Hollywood types.  The suite of rooms Odom was renting goes for $10,000 a night (and that’s without the girls!).  It includes multiple bedrooms, a bathroom you could get lost in, a private outdoor patio with a spa, and a secret entrance for those who want extra privacy. 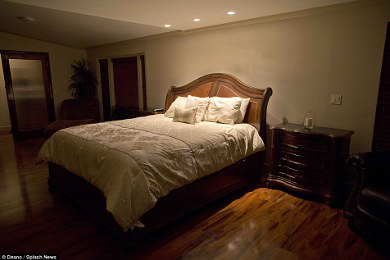 Rates here are pretty much the same as at all of the Vegas-area legal brothels. That is to say every lady sets her own rates and the rates depend on exactly what the customer wants (see our discussion of brothel prices and negotiations here).

Love Ranch Vegas has a friendly, non-intimidating feeling.  There is a full bar with neighborhood prices where you can have a drink and relax while you check out the girls.  You must be 21+.  There is a restaurant nearby that will deliver food.

Love Ranch Vegas is located about an hour west of the Las Vegas Strip via US-95N or NV-160 W.  From Hwy 160, you make a left on Crystal Rd and when you get to Appaloosa Lane, you’ll see the now-closed Cherry Patch Ranch brothel. The Love Ranch is a half-mile further down Appaloosa.  It’s open 24/7/365.  ADA-approved.

For more information on all of the Las Vegas area legal brothels, escort services and massage parlors, see Las Vegas Area Brothels and Escorts – A Guide.

2 Responses to “Love Ranch Vegas Brothel, Playground of Millionaires — Review (Closed as of 2022)”