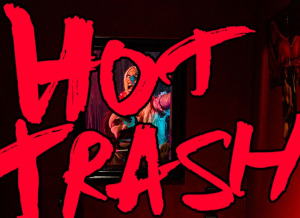 I don’t normally cover the productions of the Majestic Repertory Theatre in Las Vegas. This is a small but serious theater company in the Vegas Arts District, unknown to most tourists, primarily supported by local theater buffs. In fact, I think the only times I briefly mentioned one of their performances on this site was at Christmastime in 2018 and again in 2019, when they performed the Red Hot Nutcracker, a raunchy version of the yuletide classic ballet that had been hijacked by the Tease and Tails burlesque troupe.

The Majestic’s current productions, running through the end of May, are peep show inspired performances where the audience members rent booths to view the performers through a plexiglas screen.

On Tuesdays and Thursday nights, Hot Trash, which they’re calling “The Filthiest Peepshow in Vegas,” shows at 7 and 9 pm. A booth rents for $250 and includes a bottle of champagne. Each booth holds up to four people and you will not get a discount if there are fewer than four in your party.

Hot Trash’s Facebook page describes the show as “raunchy, avant-garde cabaret-meets-1970s Times Square peepshow . . . You’ll thrill at a rotating roster of the Strip’s wildest and craziest variety acts from the safety of your own private booth. Hosted by the impenetrable Grace Lusk (from Spiegelworld’s OPIUM and ABSINTHE).”

On Saturday nights, Back Door Drag Cabaret opens at 8 pm. Booths (for up to four guests) rent for $69 per hour. Craft beer, wine and cheap champagne are available for purchase. Bring cash, as the official announcement says: “We’ve gathered a group of the most Vicious Vixens with the lowest self-esteem and the largest need to please . . .  squatting on the stage and parading themselves in front of you hoping that someone can fill the hole created when their fathers left them. Watch as these ‘ladies’ of the night will degrade themselves for your dollar bills.”

The ads say you should wear a mask, but I suspect that may not be enforced now that Vegas has relaxed most of its mask mandates. I have not seen either of these productions, so I can’t provide any guidance on what to expect. Remember this is a theater company, not a strip club, so I doubt that any performers will be topless or nude. And I would expect the performers in “Back Door” to be men in drag.