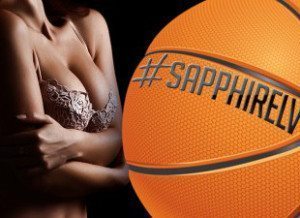 If you’re a college hoops fan who plans to be in Vegas to bet on any of the March Madness games, and you’re also a boobs fan, my advice is to do what the locals do — get your bets down in the sports book of whatever casino has the best odds, then head over to a strip club to watch the game with access to topless babes.

Many of the Vegas strip clubs have already announced their March Madness deals and you’ll find them below. I’ll update this info as more data becomes available.

Also, note that many of the March Madness games occur during the daytime and some strip clubs don’t open until late afternoon or evening. Those clubs will screen the games that air during their normal operating hours.

Sapphire is open 24/7 and has the best sports-viewing set-up in town for March Madness.  Essentially the club turns its Showroom into a sports lounge.  It has three of the largest HD viewing screens in Vegas in this room, plus wraparound TV monitors.

Sapphire has built up a good base of sports fanatics through its football, hockey and UFC viewing parties, so it tends to have good crowds for March Madness and that tends to mean hot dancers in the club.

Sapphire has a bunch of different package deals available here for both daytime and nighttime games, and for both individuals and groups. The best daytime deal for individuals is $50 and includes free transport to the club, free admission, a VIP table, and a two-hour open bar.  Plus, on March 15 through 18 (when the first and second round games occur), a free buffet is also included.  Expect high-end tailgate party food and the best donuts in town.

Sapphire’s nighttime March Madness package for individuals is $65 and includes free transport to the club, free admission, a VIP table, a $50 drink card, plus a free shot. For $135, the nighttime solo package includes a two-hour open bar.

Crazy Horse III is also open 24/7, so should be screening all of the games. The club’s standard $50 package includes transport, admission, main room seating and a $60 drink voucher. Other packages include a March Mayhem Special for $750 (for parties of up to 10) that includes two premium bottles and a make-it-rain gun loaded with $50. Topless, full bar, 21+

Other Vegas strip clubs open 24/7 that have not yet announced any March Madness plans but have screened the games in the past include Treasures and Cheetahs. 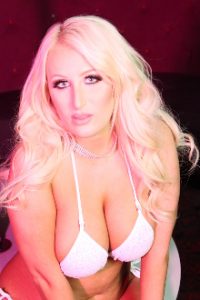 Deja Vu Showgirls opens at 6 pm and will be screening all evening games. With a four-hour open bar from 6 to 10 pm (domestics and wells), this is the best nighttime March Madness drink deal you’ll find in this town. Also, for the First Four games on March 13 (Tuesday), all drinks (including imports and call drinks) will be $2 all night long. Locals cover is $10 and out-of-state $20, but you can get in free simply for arriving by the free club limo.

Palomino, a premiere Vegas nude club, opens at 4 pm and will be screening all games that start after 4 pm. The club has not announced March Madness specials yet, but they have a permanent bottle package (see the club website) before 8 pm for up to three people for $150.  If you like fully-nude dancers, this is the place where naked girls perform on stage during the games.

Sophia’s Las Vegas opens at 4 pm and will be screening games that start after 4. No other details. Topless, full bar, 21+

Centerfolds Vegas opens at 6 pm and will be screening the games that start after 6. No other details. Topless, full bar, 21+

6 Responses to “March Madness in the Vegas Strip Clubs”