Vegas Wings It When It Comes to Strip Club Law 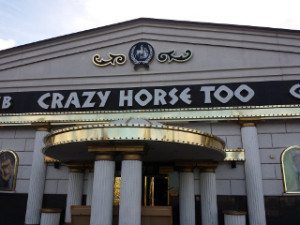 As the facts continue to surface with regards to the August 2014 closing of Las Vegas’ legendary topless club, Crazy Horse Too, it appears more and more likely that the city of Las Vegas acted unlawfully, out of negative attitudes toward strip clubs, when the club’s license was revoked.

CourthouseNews.com has provided additional details on Mike Galam’s lawsuit against the city of Las Vegas. I mentioned in my August 29 post, Crazy Horse Too — The Saga Continues, that one of the main reasons Metro closed the club was an “insufficient surveillance system.”

In his lawsuit, Galam alleges that Karen Duddlesten, the director of the city’s Business Licensing Division, told him the city required him to have a surveillance system that would retain video footage from all cameras for a minimum of 90 days that police could review at any time. Galam claims that the city code “contains no requirements whatsoever related to surveillance systems, or hard drive storage capacity.”

He claims Duddlesten made up this requirement, ignoring the actual city code, giving the cops “unfettered discretion to decide who may exercise free speech rights and on what conditions.”

Galam also objects to Duddlesten’s requirement that the club report to the Business Licensing Division any arrest, citation, or call to the police within 24 hours.  Again, Galam says in his lawsuit that no such city law exists.

He further claims that Duddlesten admitted to him that she made a mistake when she ordered the club closed, as Galam had obtained a permanent business license for the club, but that she refused to reactivate his license unless he paid another renewal fee and signed a new operating agreement.

Here’s wishing Galam success in his fight against Las Vegas prudishness and corruption.

For more information on this conflict, see my prior posts:

“Crazy Horse Too in Crazy Transition”

“A Rocky Road Ahead for Crazy Horse Too”