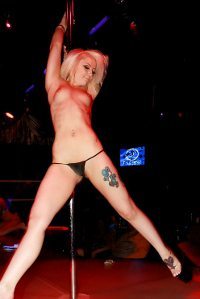 LaDonna is a Cheerleader at Palomino Club
Photo by Hew Burney

The NFL has fallen on hard times, with Monday Night Football ratings down 24% from last year. Thank heavens, the Vegas strip clubs are doing their part to make MNF fun again. Go ahead and bet on your favorite team, but I’ll put my money on the babes.

Does it irritate you that it takes three and a half hours to watch a 60 minute game — with an hour-plus for commercial breaks, and another hour-plus for penalties, just to make sure no one’s playing too “rough”?

Let me tell you, the extra two-plus wasted hours of game time go by like a cool breeze when you have a topless babe in your lap.

At Palomino Club (club review / club website), you’ve got fully-nude dancers putting on their usual wild stage show throughout the game. You’ll find yourself waiting for the penalties and commercials so you can turn your attention from the nine TV monitors back to the naked girls spreading their legs. Why sit through another ad for McDonald’s or Geico every time the QB gets sacked?

And at Palomino, there’s no cover charge for the MNF party (provided you don’t arrive by cab).  And the club provides an excellent free Hawaiian buffet (meatballs in gravy, fried saimin, garlic fried chicken, teriyaki chicken, and Kalbi ribs). During the game, there are $30 domestic buckets, $35 import buckets, and $8 shots. (If you come in a group, the biggest group gets a free bottle the following week.) 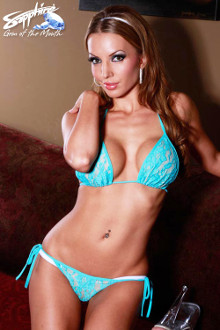 Lola Is a Sapphire Gem

At Sapphire (club review / club website) it’s the dollar lap dance tsunami at halftime that keeps the fans in their seats (see The Best Lap Dance in Vegas). Even many pro gamblers who make their livings betting on the games will often say the NFL games are now “unwatchable.” But take it from me, when you can snuggle up with a topless babe during those tedious Verizon commercials that come on whenever there’s yet another “break in the action,” you’ll hope that game goes on forever.

Sapphire’s $22 cover charge includes their buffet (with the best food of the Vegas gentlemen’s club MNF parties–from barbecue and Mexican food to salads, and more) plus two drinks. They’ve also got the biggest HD monitors and the biggest, rowdiest crowd. They could turn off the monitors and it would still be one of the best parties in Vegas.