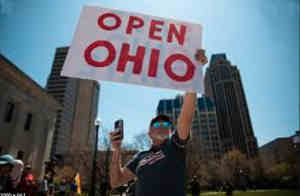 The GOP governor of Ohio has lifted the last restrictions in his shutdown order.  He’s now just putting out recommendations.  The GOP-controlled state House had passed a bill limiting the state Health Director’s authority and the prospect of that humiliation likely made him grow a pair.

That means the shutdown is over in Ohio.  Ohioans are freed!

Ohio horse racing reportedly resumes Friday, May 22.  A week ago the plan was that spectators wouldn’t be allowed, but the governor just lifted restrictions like that, so I’m watching for announcements.

No announcements yet that I’ve seen from Ohio casinos and strip clubs about reopening dates.

Looks like temp checks at the entrances, but no masks will be required. No deranged Plexiglas screens.  Tables and chairs will be spaced a bit more widely at restaurants and bars, but other than that, back to normal.

IP Casino in Biloxi and Sam’s Town in Tunica reopen Thursday, May 21 and both will be *Boyd Clean* as well.  You will be offered a mask at the entrance, but not nagged unduly to wear it.

Sam’s Town Shreveport and Amelia Belle Casino in Amelia, LA will reopen on Wednesday, May 27 and will be CLEAN.  If you’ve always wanted to see the ultimate in real cleanliness, these are apparently the places to go.

The West Virginia governor has announced that gambling at Wheeling Island Racetrack and Casino, as well as other casinos, can resume June 5.  Just about everything else that’s still closed is allowed to reopen Thursday, May 21, except for bars, which reopen next Tuesday, May 26.  Wheeling Island hasn’t actually announced yet whether they’ll reopen June 5.

However, the Greenbrier Resort and Casino at White Sulphur Springs has announced it’s reopening May 22.  It’s an upscale place; maybe they got a special dispensation.  The only Bat Plague measures they’re implementing are extra “sanitation,” a nice change from the extra “cleaning” going on in Louisiana and Mississippi.

Lawsuits Against Nevada Governor for Shutdown

I wanted to give you an idea of some of the lawsuits that have been filed against Nevada Gov. Sisolak for violating U.S. and state constitutional rights to worship and commerce with his shutdown orders. The suit asks a judge to toss the shutdown order.  You can read more about it here.

One of the plaintiffs is a doctor suing to overturn Sisolak’s ban on prescribing hydroxychloroquine for Covid-19 patients outside of a hospital.  Hydroxychloroquine has been shown in 18 studies going back 15 years to be the most effective treatment for Covid-19 patients, especially when begun early, before hospitalization.  Cure rates overall are 99%, or 92% when begun on severely-ill, hospitalized patients such as those already on ventilators.

The great results of reopening in Georgia and Florida would seem to make it harder for people like Nevada Governor Sisolak to keep the hoax going, but Sisolak is still hiding in his bunker.

Remember when the Atlantic said Georgia’s reopening was an experiment in human sacrifice?

2 Responses to “More Casino Reopenings – Just Not in Vegas”