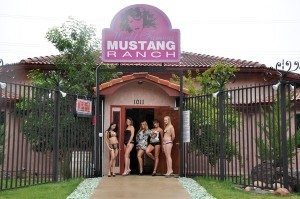 You may have read in the news recently that the premier electric car company, Tesla Motors, is about to set up what they call a Gigafactory in Storey County (just outside Reno, Nevada) to manufacture batteries for their cars. Because of a slick move by a brothel owner, Reno beat out Texas and four other states that were wining and dining Tesla.

According to Storey County Manager Pat Whitten, as quoted in USA Today, Lance Gilman is the “lead economic engine for Northern Nevada.” Gilman—a Storey County Commissioner as well as a businessman—also happens to be the owner of the Mustang Ranch, arguably the most famous legal brothel in the U.S., as well as the Wild Horse Ranch, another brothel located on the same property.

In order to get the deal signed, Gilman pulled a fast one that the other states never saw coming. As owner of the industrial park where the Tesla factory is to be built, he hired 350 construction workers and spent $18 million on spec, and in less than a month had his land graded and ready for cement to be poured for the factory’s foundation.

While the other states were talking, Gilman acted as if the deal was done, and he won. The Tesla Gigafactory is slated to create more than 6,000 jobs in the Reno area, a huge boon not only to Reno but to the state (and possibly to the Mustang Ranch).

This is what I love about Nevada. The Mayor of Las Vegas for many years was the mob lawyer, Oscar Goodman, whose wife now serves as Mayor. And a Storey County Commissioner, the “lead economic engine for Northern Nevada,” is a guy who runs whorehouses. In any other state, these guys would be anathema. In Nevada, they’re the toast of the town.