What Happens at a Lifestyle Legend: Green Door Las Vegas

The Green Door is one of Las Vegas’ longest-running sex clubs for swingers and other adventurous adults.  Las Vegas’ Green Door opened in 1998; only Red Rooster has been swinging longer in Las Vegas.

A friend of mine made three trips to the Green Door with his wife and sat for an interview with TVO.

For this couple, the Green Door was an adventure, more of an experiment than something they would want to do regularly.

TVO: What is your background in “the lifestyle”? (swinging)

TVO: So the Green Door was your first lifestyle experience?

Newbie: Yes. At the time we lived in California, so the Green Door was an out-of-town opportunity to do something forbidden, without running into another couple from our local PTA!

TVO: Why the Green Door? 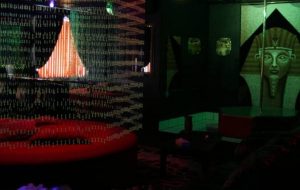 TVO: Can you walk us through the experience?

Newbie: Yes. The club is in a sketchy looking strip mall a few blocks east of The Strip. There is a gay bar next door, and a few other ethnic restaurants nearby. It is well lit, and active enough to feel safe once you settle down about the old Commercial Center shopping plaza. Some say that the gay bar, Badlands, is a fun place to pre-game before going to the alcohol-free Green Door.

At the Green Door check-in they ask for ID. We were out of state at the time, so I think it cost us about $100. The cashier, manager and security guard were professional, and you got a secure feeling that they are used to welcoming new customers.

TVO: How did you mix into the club and the other customers?

Newbie: You can ask for a tour, and I’d recommend it because the place is a two-story labyrinth of rooms, chambers, bunk beds, a spa, locker rooms and theme rooms.

Newbie: That’s not quite what they are. There is a series of semi-private cushioned platforms that are the size of a full-sized bed. They have three walls, and a fourth wall of beads. It’s in the area of the club that are for ‘couples only.’  I think the idea is for a single couple to get it on while other couples walk by and watch. You are separated, but only a foot to two feet away from the couple you are watching. If you want to invite contact … you can easily have them reach in an touch you.

TVO: Did you use these bunk beds?

Newbie: We did on the second visit.  On the first visit we had a juice drink at the bar, and watched a few couples come in. We chatted with a few but frankly we weren’t there to play with others; not yet. The 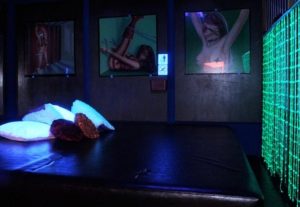 bar has a pool table, but we got the impression this is not a club to hang out, talk, dance and socialize. We started to explore the club on our own. There is plenty to see. I suggest you see every room before trying any of the play areas. We saw a large room on the first floor with sex chairs and comfortable couches. on the first floor there were rooms that were darker for more privacy, and others that were more conducive to watching other couples play.

TVO: Others have said the club attracts a large number of solo men. Did you see that?

Newbie: I’d say yes, that’s true. The club is very dark so sometimes they appear in the shadows. We found that some guys would follow you from room to room. It seems creepy except they generally keep to themselves. The impression we got was they would love for you to invite them to play with you but will rub themselves if you don’t. Since there are places in the club where you can avoid them, we didn’t find it intrusive. If a couple plays in ‘public’ I think they are signing up for the shadowy ‘company.’ On a subsequent visit we got very turned on by their attention while we were playing as a couple.

TVO: Tell us more about that!

TVO: Did any of those guys make a move to try and join you?

Newbie: No. Believe it or not. I think most of the guys are harmless. If they are not, the club kicks their ass out in a flash we’ve been told.

TVO: Did you do anything with other couples?

Newbie: On our first visit, we found ourselves in a very dark room with three other couples. Since everyone enters or exits at different times, each seem to be on their own pace. For example, when we laid down, we were clothed and we watched one couple make out, we watched another couple taking turns giving head, and a third couple start to fuck doggie style. It took us less than a minute to get into that same routine; on our own. When I say dark, I mean it! Even though we were just feet away from the others you could not recognize facial features. You could see movement and hear their moans and organisms. It was hot as fuck!

TVO: Was that it?

Newbie: For us, that was enough on the first visit. I subsequent visits we found ourselves in the couples only section. That is a guarded area. You enter a maze of the cubby holes that I described earlier. The best way to picture it is like a railroad sleeping car. The bed is about 2 feet off the ground. The ceiling is about six or seven feet high. There are three walls surrounding the full-sized mattress. The surface is vinyl, and they clean it between each couple.  It’s very dark. You cannot see who is in each bed.

While couples play, onlookers roam by. Many couples stop by your cubby and stare. Some look to be 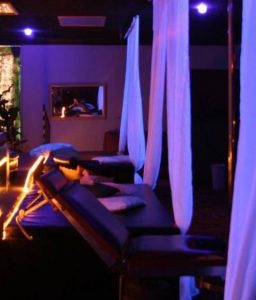 invited, but hanging beads send the message of separation. My wife and I were fucking like mad. I’m more aggressive than she is  and I was hoping my wife would invite a woman or man to reach through and engage us. At some point a woman did and felt up my wife’s ass and tits. That was a huge turn on for me. It was only momentary, but hot as hell.  After we both came, we rested and watched the action across from us. That was two couples who were swapping. The guys had their feet on the hall floor and were loudly putting it to the ladies. One of the women switched and got on top of a guy, in a cowgirl position. Watching them got me hard again in minutes. It was like being in my twenties again!

We went back to fucking like mad again. I’m proud to say we gave a first class show to the dozen couples that walked by while we played. Some stop to tell us so!

TVO: So, you returned? Why?

Newbie: We found it super-hot. Before we moved here, we learned to go right from the plane to the Green Door. We learned to dress down to gym shorts, t-shirts and flip flops. Eventually we moved to Las Vegas and got the local’s price!

TVO: Some you never swapped with other couples?

Newbie: Not at the Green Door. The thing we liked about the Green Door was the anonymity of the experience. The darkness, the small rooms, the lack of socializing was exactly what we wanted at the time. Later we enjoyed Sea Mountain for the ability to see and be seen. Sea Mountain is a very lovely, sun lit, tranquil atmosphere. We also had a few lifestyle dates with others where we soft swapped. Then came covid and it was time to close down that part of our life.

TVO: Do you recommend the Green Door to others?

It’s a good place to go at your own pace. In other Lifestyle situations there is a fair amount of pressure to move along into the flow of the party. Social pressure to not be a ‘party pooper’, or the relax your own standards to take one for the team are pretty heavy. At the Green Door, no one knows who you are. No one asks your name, no one asks what you do for a living. The club atmosphere lets you easily go as fast or as slow as you want into the fray.

TVO NOTE: For an account by a lifestyle regular and heavy user of the Green Door, click here!

For out-of-state males, Green Door admission starts at $90 (locals $80) and goes up a bit on Friday and Saturday nights.  Single females pay only $20 any night.  Out-of-state couples pay $80 admission ($60 for locals).

You can also get a big discount on 2-night, weekly and monthly passes.

You can find the Green Door in a strip shopping center on East Sahara Ave.  It’s on the east side of the shopping center.  You can’t miss it because it’s all lit up with green lights.  Here’s the info:

You can find more information and photos at the Green Door website.