[Note:  The vote fraud section of this post has been moved here. 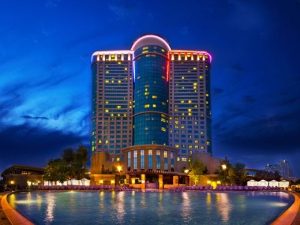 Foxwoods Draws Guests from New York, Massachusetts and all Over New England

Mohegan Sun has pushed back its reopening to June 1. The good news is that Foxwoods has announced it will be reopening June 1 as well.

The Democrat governor of Connecticut has announced he’s unhappy with the reopenings, as they will make it harder for him to keep up the Death Plague hoax to rig the 2020 elections.

There will be temperature scanners at all entrances, and guests must wear face masks even though 22 studies show they do nothing whatsoever to stop transmission of respiratory viruses, including Covid-19.  That’s because every mask has air holes to allow you to breathe and Covid-19 particles are in the heart of the range of particle sizes masks cannot stop.

Foxwoods and Mohegan Sun draw guests from New York, Massachusetts and all over New England.  What will Nevada Governor Sisolak’s excuse be when no disaster ensues after their reopening?

Boothill Casino in Dodge City and the Kansas Crossing Casino in Pittsburg reopen tomorrow, May 22.  Kansas Star Casino in Mulvane reopens Saturday, May 23.

Slots only for now.  Temps taken at the door.

If you want to go mask-free and play blackjack or other table games, the tribal casinos in Oklahoma are open or you can wait for the Kansas tribal casino Sac and Fox to reopen June 1.

Sac and Fox will be checking temps at the door and has proudly announced their new TruClean revolutionary cleaning system.  They have applied a Truclean self-cleaning antimicrobial surface coating throughout the 52,000 square foot casino property.  According to the casino, “TruClean’s surface-bonding ‘sword like’ coating is registered internationally as a long term disinfectant that destroys bacteria and viruses on contact.”

Golden Eagle, a slots and bingo tribal casino near Kansas City, will reopen June 1 as well.

Pritzker, der Führer of Illinois, has been forced to withdraw his rule that made a Class A misdemeanor out of violating his business shutdown order.

The announcement came as an Illinois General Assembly committee was about to review the rule that imposed criminal penalties of up to a $2,500 fine and a year in jail.  Committee members were inundated by calls and emails from constituents in the 48 hours leading up to the vote.  Constituents who called were roughly 50/50 GOP/Dem.

75% of Illinoisans believe the shutdown order should be ended immediately according to a new poll.

Pritzker put the criminal penalties in place after Illinois’ Madison County announced on May 13 that it would no longer enforce Pritzker’s shutdown order.

It also turns out Pritzker is making a lot of money from Bat Plague.  His family firm has large holdings in firms making millions off China Cooties testing.

Pritzker’s withdrawal of the rule means he did not have the votes to avoid public rejection from the legislators.

1200 California pastors have notified Democrat California Gov. Newsom that they will be holding in-person services in their churches starting May 31, the Day of Pentecost, in defiance of his shutdown order.

New Jersey and Minnesota churches have just announced they are reopening in defiance of Democrat governors’ shutdown orders in their states as well.  New Jersey’s Governor Murphy said he wouldn’t permit churches to reopen until there was a vaccine for Bat Plague.

In Minnesota, Democrat Governor Walz is allowing casinos to reopen May 26, but not churches.  That’s about as blatant an attack on freedom of religion as you can get and the churches say they won’t stand for it.  They will be reopening the same day.  Here’s the righteous letter from the Catholic Bishops of Minnesota to the governor. Lutheran church leaders have sent Walz a letter as well.

700 churches will be reopening May 26 in Minnesota.

Earlier this week, the DOJ warned Newsom that he was violating the Constitutional rights of the devout with his church lockdown.

Expect the DOJ to join in any lawsuit these churches file if Newsom, Walz or Murphy dares to defy Barr and God by attempting to shut them down.

Three Democratic members of the Staunton, Virginia city council were ousted by Republicans on Tuesday despite receiving more votes than they did four years ago.  The GOP turnout was just that overwhelming.

Democrats turned out at roughly twice their usual May election numbers.  But Republicans turned out as if a presidential election was happening.  Now conservatives control the city council.

Anger at the Democrat Virginia governor’s lockdown orders was cited as a major factor in GOP turnout.  A local reporter called the results “stunning almost beyond words.”

Meanwhile, a study in Canada shows that the Bat Plague death rate for people under 65 is six per million people, or 0.0006 per cent. The annual death rate from the flu is 0.1%.  So the death rate of the annual flu is 166 times greater.

Remember, data from Tokyo say China Cooties have killed no one at all.

CDC Director Redfield says all the Safety Theater is in place now for everywhere in the U.S. to reopen.

He says the states now have sufficient contact tracing and testing to eliminate Democrat governors’ sole remaining excuses for continuing their shutdowns.

Redfield is the guy who refused to allow independent testing in the first weeks of the Bat Plague crisis.  He required only CDC test kits be used.  The required CDC test kits were contaminated with coronavirus.  There are rumors his job is in jeopardy.

Gaming Control Workshop to Determine How Vegas Casinos will Reopen

Friend of TVO Benny Hill alerted us to an upcoming Nevada Gaming Control Board workshop that will supposedly have “health experts” testify on how Las Vegas casinos can “safely reopen.”  The meeting is scheduled for next Tuesday, May 26.

The trouble is that Nevada Governor Sisolak is a Harry Reid puppet who takes orders from the DNC cabal.  Like Democrat governors Pritzker, Whitmer, Wolf, Mills, Lamont, Brown, Murphy, Northam, Walz, Newsom, etc., he does not make decisions of his own.

So if the DNC cabal wants to try to keep their Bat Plague election-rigging hoax going, and they do, all he has to do is pick “health experts” for the workshop who will follow the same orders Sisolak is getting.

Results of Hydroxychloroquine Prophylaxis Among 10,000 Cops

Yes, President Trump announced he’s been taking it for weeks.  And health care workers in all 50 U.S. states are taking hydroxychloroquine to keep from catching Bat Plague.

Now they’ll be prescribing it to health care workers in the UK as well.

In India, 10,000 policemen were offered hydroxychloroquine prophylaxis against Chop Fluey. About 4,500 routinely took the drug, while 5,500 refused. In the HCQ group there were no deaths. In the no-HCQ group, there were nine deaths

Of those who contracted Chop Fluey in the HCQ group, the attacks were “mild.”