An article in the Daily Mail Online cites an academic study of strippers in the UK conducted by researchers at Leeds University that found that almost one-third (29.4%) of strippers were currently enrolled as students at various colleges and universities. Almost 200 strippers from clubs and pubs across the UK were interviewed in the survey. The researchers were surprised to find that not only were many strippers college students, but many also came from middle-class families.

Those who were less affluent were stripping to pay for their tuition and books, while those who were not in need of education assistance were stripping for extra spending money as well as social interaction. One student was quoted: “It’s just like party night! I prefer to go to work than go out on a weekend really.”

According to Dr. Kate Hardy and Dr. Teela Sanders, who conducted the study, most of the student/strippers felt that stripping was a perfectly respectable occupation. One club manager said that September was a peak time for students to inquire about stripping jobs and another acknowledged that he put out flyers to attract incoming frosh to audition.

If you’re into the club scene in Vegas (or anywhere else in the free world) you probably know what techno-dubstep-house-trance-electro-hardstyle-UK-garage music is. If not, forget about it. I wouldn’t know a dubstep if I tripped over one.

I finally made it to Little D’s on a couple recent Mondays to see what EDM (Electronic Dance Mondays) was all about. From my perspective, it’s about getting more mileage for your lap-dance bucks.

Here’s what you need to know. Nightclub DJs are different from strip club DJs. Strip club DJs talk more. (And the Hustler Club has been advertising lately that for $50, they’ll make their DJ shut up for ten minutes! I don’t know if any customers have taken them up on it yet.) Strip club DJs have a job where they play 2 1/2 to 3 minutes of a song, then start the next one for 2 1/2 to 3 minutes, then start the next one, etc. This is because lap dances are sold to customers by the song, not by a specified time period. It’s the DJs job to keep that time period short, so 2 minutes and 45 seconds into whatever’s beating out of the speakers, he jumps in with That’s Brandi and she’d just love to get you into the VIP room and she’s available like all our lovely ladies here tonight yadda-yadda-yadda …

Nightclub DJs are different. Nightclub DJs are the new drummers. They look at sound equipment used by most sane people for playing recorded music, and they see a drum set. DJs are drummers in disguise. If you watch a club DJ, at first he seems kind of normal; but if you really study him, you can tell he’s barely on this planet. He never looks at a clock to remind himself when three minutes of a song are up. Which song? Sometimes, he’s playing two or three songs at the same time.

So, every Monday night, Little Darlings is hiring a nightclub DJ (a different one each week) to make their strip club sound like no other strip club in town. I like the sound. The DJs are pretty good drummers. The reason any of this is important, however, is that when you buy a lap dance on a Monday night at Little D’s, you might get more than the industry standard time-wise. Sometimes the dancers aren’t quite sure if a song’s over yet. I timed one “song” at about 4 minutes and another one close to 5. Lap dances take place in private rooms, not out on the main floor. In the main room, the stage dancers are the show.

Monday is also couples night at LD and a section of the main floor is cleared for customers to dance. Couples do attend, but I never saw any of them dancing. I probably didn’t stay late enough. My nightclub days are over.

To read my full review of Little Darlings, click here. 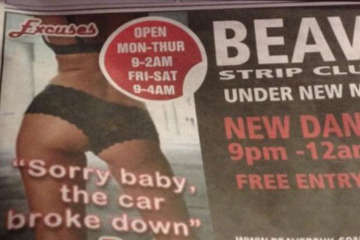 The Advertising Standards Authority has spanked Beavers Strip Club by publicly admonishing the club for an ad that appeared in the Watford Observer (somewhere in the UK) with the line, “Sorry baby, the car broke down,”  which the ASA ruled to be “demeaning to women.” Beavers must now adopt a new advertising slogan.

I find the ad funny and more offensive to men than to women, but I think we men deserve the offense. We are all excuses when it comes to time spent in strip clubs.

The ASA apparently took no offense at the name “Beavers,” as the name is just honest advertising. A spokesman for the club said the new slogan would likely be: “Beavers. Lots of them. And some really lovely ones.”