A peepshow is a place where you can watch a performer or performers from inside a private booth. In the two peepshows I know of in Las Vegas there is a glass or plexiglass window separating the performer(s) from the audience. 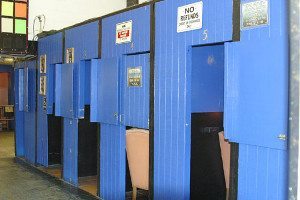 [Update, May 2019:  After many years in business, Showgirl Video Peepshow, the last peepshow in Las Vegas, has closed.  As of May 2019, there are no peepshows in Las Vegas.]

It’s not modern but it is clean and well-kept (see booths at right).

At this establishment, you put a buck into a turnstile in the adult video/toy store and the turnstile lets you into the peepshow area. The windows in the booths are clouded so you can’t see the dancer(s) until you insert another dollar into a booth’s dollar eater. One buck unclouds the glass for two minutes.

Though this place is seedier than Purple Pussycat, the dancer was grade A—she could have worked at Rhino.

There’s yet another slot where you tip the dancer. I pushed a couple bucks through this slot and the dancer started paying attention to me.

She asked me if I wanted a private show, then she came out into the hall and gave me a tour of the private showrooms. These are also booths with a window separating the dancer from the customer, but one-on-one. The dollar-eaters in these booths take $5 for ten minutes.

There is a chart with rates for various types of shows (spread, lube, toys, 2-girls, etc.) with prices ranging from $20 to $100. There were two other dancers on duty that I saw while discussing the private show rates. They were also grade A.