I think we missed this story … but I love it, so keep your fingers crossed that the great management team at Palomino’s does it again. I’d happily rent a boat to cover the story if I can’t get aboard the “S.S. Palomino.”

On a Monday in April the World-Famous Palomino Club threw a boat party on Lake Mead. The club holds regular boat parties for the dancers; however, this was a BYOB (bring your own boat) event that was open to industry folks and customers of the legendary alcohol plus all nude club.  Even in Vegas April can be chilly, and the Colorado River based lake behind the Hoover Dam temps might cause a shrinkage problem for some guys. It’s an interesting science question … “What happens when you mix shrinkage temperature water with the hottest topless women in Nevada?”

Let’s find out at the 4th Annual Palomino’s Cove Party. 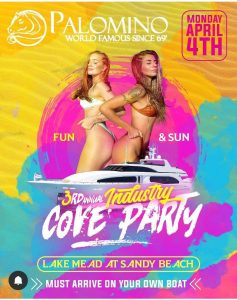 In the last issue of Random Vegas #1 TVO highlighted the rumored MyFreeCam takeover of the Artisan Hotel. It was more than a rumor.

Video and pictures are available in these highlighted links. READER WARNING: To be a MyFreeCam girl you need not be in great shape, or conventionally attractive! There is a girl for everyone in this world. 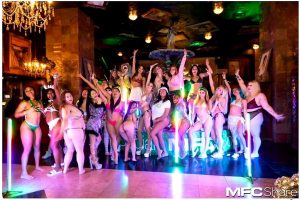 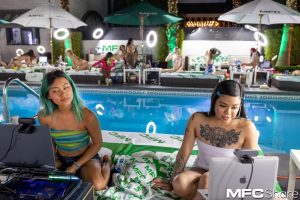 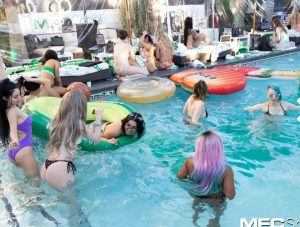 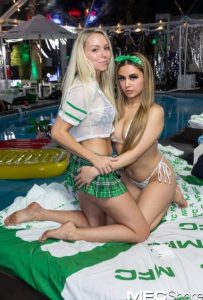 Las Vegas Advisor QUESTION of THE DAY: Who owns the bar slot machines and how does the arrangement work?

Q: I hang out at a local bar in Vegas. The bar tops are managed by Jett Gaming. This small three-pub chain is family owned. When we gamble enough, the bar comps our food. Who owns the machines and how does the arrangement work? Do they split food, drinks, and gaming?
A: We put your questions to Jett Gaming, but no one there was inclined to answer.

However, the Jett website hawks a variety of products and services, not least of which are International Game Technology G20 bar top video poker machines.

We know of no slot route operators, — like Jett Gaming, and Golden Entertainment, largest in Nevada, and Century Gaming, second largest, which was just acquired by Accel Entertainment, largest slot route operator in Illinois — that doesn’t own and operate its own machines. In turn, the operator leases the machines to bars, convenience stores, supermarkets, any venue that has up to 15 machines, at least in Nevada.

We also know of no slot route operator that participates in the food and beverage revenue stream. In Jett’s case, comps are awarded at the host bars discretion with the aid of a proprietary player-tracking system. To make its dough, Jett relies on a revenue-sharing model that works on an undescribed sliding scale: “Locations generate income based on high revenue instead of volatile net win figures.” It stands to reason that the more lucrative your route, the bigger the share Jett takes.

As for taxes, Nevada collects quarterly and annual fees per machine from slot route operators  For the first five games, the quarterly fee paid to the state is $81 per machine. The locations pay $141 per quarter for each of the next 10 machines. Under the formula, the total annual tax, including annual fees, for a location with 15 slot machines is $11,010.

Why Do Men Go to Strip Clubs?

The author says that before she became a stripper, she was an anti-pornography feminist, but that in talking to the men who were strip club regulars, she came to see that, just like women in our society, men too were damaged by the sexist culture we live in. They had difficulty dealing with what they saw as women’s conflicting demands for both traditional masculine traits and more emotional presence.  And they were confused by the desire of women to be called beautiful but not be objectified. Katherine Frank reported that she had very positive experiences dancing. She said: “I learned that men have a much more varied perception of what sort of bodies are beautiful or sexy than a lot of women think they do … I had stereotyped men as wanting something narrow, when in fact they have a wide variety of tastes.” She stated that for men who are in love with their wives and want to stay married, what happens in strip clubs is “real enough to be exciting, but was still a fantasy.” Among her findings were that strip clubs do not interfere with a man’s ability to achieve intimacy with a girlfriend or wife. Katherine Frank argues that going to strip clubs actually solidified the marriages of many of her interview subjects. When interviewed by Salon Magazine Dr. Frank was asked how she would feel if her husband went to a strip club, she responded: “Honestly, I wouldn’t like it! For me, a lot of it is about the money — I don’t have the disposable income to spend on that kind of entertainment, and if he did have that kind of extra money, I’d want it to be fair. Maybe if I could spend dollar for dollar somewhere else, but unfortunately, there aren’t yet places where women can go pay hot young men to stroke their egos. That may come in the future.”

TVO Girl of the Day 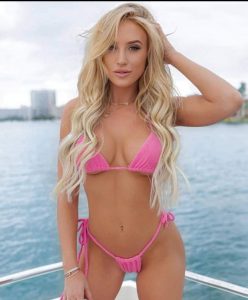 Some say this is why men go to strip clubs!

REMINDER: If you enjoy ToplessVegasOnline.com …. then SUBSCRIBE FOR FREE