Note:  Part of this post, “Is Sisolak Conspiring with Vegas Casinos to Keep Them Closed To Screw the Union?” got too long and had to be moved here. 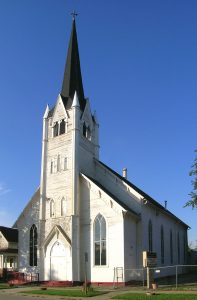 In his press briefing this morning, President Trump declared places of worship to be essential services and ordered governors to reopen them immediately.

I reported yesterday that 1200 pastors in California and 700 Catholic and Lutheran bishops and pastors in Minnesota had notified the Democrat governors of their states that they would be resuming in-person church services in defiance of church lockdown orders.

New Jersey churches notified their Democrat governor that they would be defying his lockdown order as well.

In Minnesota, Democrat Gov. Walz actually gave the okay for casinos to reopen, but not churches.  It’s been an amazing, blatant Marxist attack on freedom of religion.

I guess we’ll see whether Trump has to send in the National Guard to escort the devout into their places of worship.

Do you all remember the 77-year-old Michigan barber who reopened his barber shop in defiance of Fascist Barbie’s shutdown order?

The vindictive commie took away his license after the county refused to enforce her shutdown order against him.

Now a county judge has ruled that he can stay open.  Shiawassee County Circuit Court Judge Matthew Stewart opted not to grant Attorney General Dana Nessel her request to force the barber’s closure.  He said the state had failed to make its case that the barbershop is a threat to public health.

The fascist Michigan health director has been personally attacking the barber in the media and on social media.  This is the dimwit who says the president can’t come to Michigan unless he’s wearing a mask.

Viejas Casino in Alpine, California, just east of San Diego, was packed for its reopening on Monday, May 18.

There were no Plexiglas shields on gaming tables.  The casino was so busy it was impossible for customers and employees to stay six feet apart.

Customers were required to wear masks, but Covid-19 sails right through masks, so those didn’t protect anyone.

The average incubation period for Bat Plague is five days.  Will area hospitals be packed tomorrow?  (No.)

62% of U.S. Covid Deaths Are Due To Six Governors

Six governors in the U.S. ordered a policy of forcing nursing homes to take infectious Covid-19 patients to “protect hospitals.”  Five of the governors — of New York, New Jersey, Connecticut, Pennsylvania and Michigan — are Democrats.  The Republican governor of Massachusetts ordered the policy as well.

The CDC warned from the start that Covid-19 would disproportionately hurt the sick elderly.

Had the death rates in these six states been the same as in the rest of the U.S., we would have had 50,000 fewer Covid-19 deaths.

The Seattle Times is reporting that five people who died of gunshot wounds have been officially listed as Covid-19 deaths.

In their desperate feigned attempt to get Nevada Governor Sisolak to reopen the state, casinos are now proposing installing self-cleaning Plexiglas dividers between slot machines.

It’s just Reopening Theater.  Sisolak won’t reopen yet because the casinos need to stay closed until June 18 to void their contracts with the Culinary Union.

As Long As We’re Tackling Hoaxes…

A new study shows World Trade Center Building 7 did not collapse due to fire and a group of 3000 engineers, scientists and architects is demanding the American National Institute of Standards and Technology (NIST) retract their 2008 report that said it did.  That link is to coverage of the study in the leading mainstream Canadian construction industry publication.

The new study is a detailed four-year analysis of the Building 7 collapse that shows the building’s failure was due to a “near-simultaneous failure of every column in the building.”  That means the NIST finding that heat from the fire caused beams to “walk off” their moorings was wrong.

According to the group, “Under the conditions described, the displacement of the outside steel would have been only one inch, not the 6.25 NIST claimed, and not enough to cause failure.”

The group claims the collapses of all three World Trade Center buildings were due to something beyond heat-induced failure.  That’s because there was nothing in the offices of sufficiently combustible nature to feed the fires from the plane crash enough to raise the temperature to above 1,400 degrees Celsius (2552 degrees Fahrenheit), the temperature at which the steel structure would have melted.

The jet fuel could have taken temps to only 495 degrees Fahrenheit under the most generous assumptions.  That’s less than 20% of the temperature required to melt steel.

Steve Pieczenik, Deputy Assistant Secretary of State under Henry Kissinger, Cyrus Vance and James Baker, has said the collapse of the three buildings was carried out by Mossad demolition experts.  Pieczenik was in charge of counter-terrorism at the State Dept., worked out the psychological strategy and tactics for the Camp David Accords, and has worked on international psyops with the ClA.

University of Alaska civil engineering professor Leroy Hulsey, principal investigator of this study, his research assistants, Feng Xiao, now an associate professor at Nanjing University of Science and Technology and Zhili Quan, now a bridge engineer for the South Carolina Department of Transportation, found that the design standard of Building 7 was not exceeded by the fire and that simultaneous and controlled demolition caused the structural steel to fail.

They make no speculation about why there was a controlled demolition of the building.

Our government has been lying to us for a long time.

8 Responses to “Breaking News in the Bat Plague Wars”