The Strat Theater is the home to Sammy Hagar’s headlining residency. The room hosts mentalism show Banachek’s Mind Games Live at 4 p.m., the magic of Xavier Mortimer: The Dream Maker at 6 p.m., and the hip dance-centric production iLuminate at 8 p.m. Rouge fills the late-night void in the 650-seat theater on the second level of the north Strip resort.

As the audience files in, the sexy dancers mill about and pose on the small stages nestled among the theater seats and comfortable banquettes. There is a tension in the interactions, because much of the cast is foreign speaking, except for the boisterous “Doctor “and his “Nurse Naughty played by Poppy Fairbairn.” Those who’ve seen the Gazillionaire and the Assistant in Absinthe will know the parts these two will play in the production. They not only keep the show on track, but they also have several remarkable feats of acrobatics that make up for a few clinker jokes.

Rouge is an ambitious stage creation that works spectacularly on several levels. It’s exciting, funny, and sensual and it overflows with highly skilled performers. 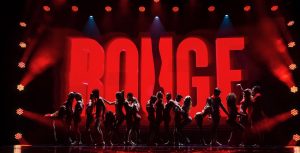 The first act is a clever illusion from an upright bed. An attractive couple begins to fantasize under the sheets and their visions come to life in the form of multiple combinations of women and men. Partners nimbly emerge from under those same sheets. It’s a treat for the eyes and the imagination! This is followed up by one of the best aerial acts I’ve ever seen. Two blond beauties share a set of ropes and they glide, twist, and cavort in every way you can imagine. It was beautiful and thrilling.

Keeping with the French theme, the next act is a special water dance done in a 10-foot-high champagne glass. The dancer is an amazing gymnast and acrobat. Like the numbers before and after, the staging is top quality. The rinse cycle never was as good as the one at Rouge! 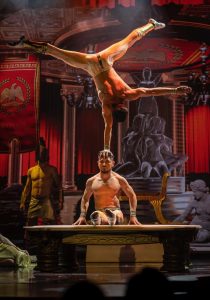 Next is a Roman palace with a unique disco mix of EDM and Pavarotti. It’s brilliant music for this provocative set with male acrobats as Roman soldiers. The two bring down the house with their strength and flexibility. That’s right: “Do you like gladiator movies, Tommy?”

Catch your breath. The next number is a set of male and female circus ponies who respond to the crack of two whips by the “bitch trainer.” I can’t describe the costumes adequately. I’m trying to unsee what I saw last night! Sorry. As a personal note, my friend Anthony Curtis almost took one of those whips to the head because the “trainer bitch” flung them to stage right and he had a very good seat. Close call!

A spectacular pole dance by a gifted blond was a study in strength and daring. Her topless body is what art students seek for a perfect human form. The pole dance is followed by another aerial by a couple who begin this number in their bed. Before you can say “Rouge is a hit,” they’re both flying high above the stage.

I’m running out of superlatives for this wonderful show. 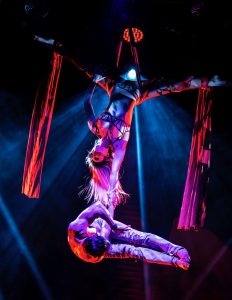 The final act is a very creative routine involving a UPS driver delivering a boxed sex doll to the Doctor. The dancing doll is one of the funniest and smartest things I’ve seen on a Vegas stage.

The cast comes out for an extended curtain call and audience photos. There are no photos during the show. The spontaneous explosion in picture taking and videotaping at the end is a great proxy for the appreciation and admiration this preview audience had for the cast and show.

My feeling is Rouge is precisely what many Las Vegas travelers want from our city — thrills, beauty, naughtiness, and risky stunts. Rouge delivers on that promise. I predict a long and successful run at the Strat and wherever else this show is staged. 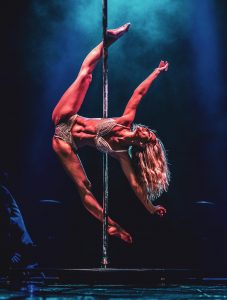 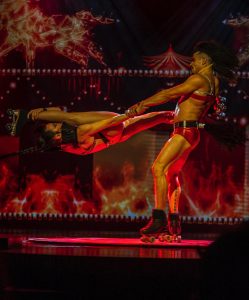 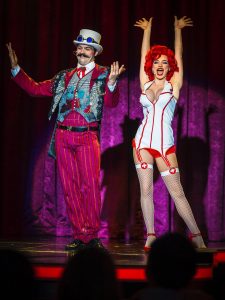 17 Responses to “Review of Rouge: THE SEXIEST SHOW IN VEGAS”