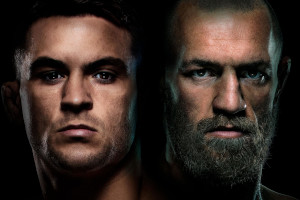 UFC 264 doesn’t take place until Saturday, July 10, but Vegas is counting on this event to bring in a crowd and a crowd with money to spend. The fight is taking place at T-Mobile Arena and ticket prices run from $600 to over $12K. To watch the fight at home, the ESPN PPV price is $70, with various package rates for subscribers.

July 10 is two weeks from this Saturday, but I’m posting this announcement early because traditionally a McGregor fight will fill the hotels, jam the sports books, and bring SRO crowds into the bars and screening parties. Las Vegas loves Conor McGregor. If you’re  considering coming into Vegas for this event, make your plans and reservations early.

McGregor beat Poirier in a first-round TKO in their first match in 2014. The didn’t meet again until January of this year, when Poirier beat McGregor with a second-round TKO. This is a lightweight fight, not a title bout, though both fighters have held the lightweight title in the past.

Sapphire is the first Vegas strip club to announce a viewing party for this fight. Sapphire’s package deals for up to 10 guests are already posted on the club website here. The best deal in my opinion is their $300 package for up to three guests that includes a $250 beverage credit in addition to limo transport and free entry. (The total price comes to $385 when you include the taxes and service fee.) I expect more strip clubs to screen this fight and I will report the clubs’ deals as I learn of them.

2 Responses to “Sapphire Will Screen UFC 264”